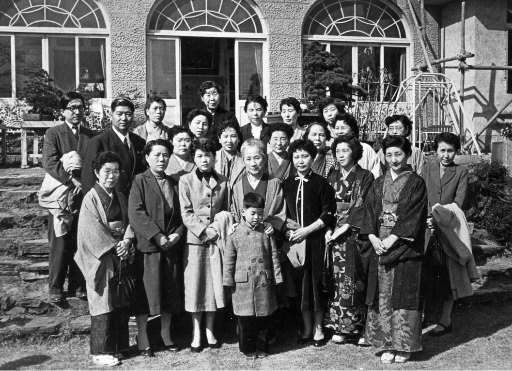 “This is no longer considered the postwar period.” When this sentiment was declared in the economic white paper issued by the Japanese government in 1956, a film that captured the distress and the courageous struggle for survival of the A-bomb survivors in Hiroshima and Nagasaki was being produced. The film bore the title “Ikiteite Yokatta” (“It’s Good to Be Alive”). The Japan Council against Atomic and Hydrogen Bombs, which was established the previous year, raised money for the production, while Fumio Kamei, a film director who had created well-received documentaries even before the war, directed the film. Though it was a 49-minute film, shot in black and white, it was screened at 425 venues nationwide, including in Hiroshima, and helped sway public opinion in favor of implementing relief measures for A-bomb survivors.

Yoshiko Takano (maiden name, Murato), 73, a resident of Higashi Ward, Hiroshima, was shown the film, which has become available on videotape, and said: “I think I appeared in a scene that took place on a streetcar.”

The camera first caught Ms. Takano as a passenger in a Hiroshima streetcar running in front of the Atomic Bomb Dome and captured her keloid scars which remained raised even after surgery. At the end of the film, the camera zoomed in on Ms. Takano’s face again, among others surrounded by a banner that read: “Welcome, A-bomb survivors petitioning the Diet.” Then Ms. Takano spoke, delivering an appeal:

After watching the video, Ms. Takano seemed to catch her breath before saying, “It was indeed my voice, and we all felt the same way.”

In March 1956, about 50 A-bomb survivors and others from Hiroshima and Nagasaki traveled to Tokyo to appeal for their cause directly to the Japanese government and the Diet. It was a journey of more than 17 hours even by “Aki,” an express train that originated from Hiroshima station. They visited both the Upper and Lower Houses and called for “defraying from the National Treasury the expenses of medical treatment and relief for A-bomb sufferers” and “banning hydrogen bomb tests in the Pacific region.”


A five-minute meeting
Subsequently, five members of the group, including Ms. Takano and Senji Yamaguchi, a Nagasaki resident who also appeared in the film and now serves as a co-chairperson of the Japan Confederation of A- and H-bomb Sufferers Organizations, met with Prime Minister Ichiro Hatoyama. Mr. Hatoyama, who was leading the government for the third time after the Liberal Democratic Party was born from the merger of the Liberal Party and the Japan Democratic Party the previous year, reportedly responded, “We will do what we can.” The meeting lasted about five minutes.

The next day, Ms. Takano, with others, visited the private residence of the prime minister to also meet with Kaoru Hatoyama, Mr. Hatoyama’s wife. The book entitled “Hatoyama Ichiro・Kaoru Nikki” (“The Diary of Ichiro and Kaoru Hatoyama”), published in 2005, includes a description of meeting “female A-bomb survivors from Hiroshima, with others, at 2 p.m.”

“I think she was sympathetic, because it was the first time that she had met A-bomb survivors,” Ms. Takano said. She remembers that the prime minister’s wife offered her some sponge cake.

Shizuko Abe, 79, a resident of Kaita Town, Hiroshima Prefecture, joined the trip to Tokyo with her young child. She went to these lengths, traveling across the country with the A-bomb survivors’ group to petition the Diet, because of her “anger at the atomic bombing.” The bombing occurred shortly after Ms. Abe was married, when she was part of a volunteer labor force in Naka Ward, engaged in efforts to create a fire lane in the event of air raids. She suffered severe burns in the blast. “I’ve had surgery, but the scars on my skin won’t disappear,” she said. “I wanted them to listen to the feelings in my heart, how again and again I had made up my mind to kill myself.”


“Susceptible to U.S. influence”
Ms. Abe still remembers the words she overheard at the private residence of a political bigwig with links to Hiroshima. Hayato Ikeda, who would become the prime minister of Japan four years later, remarked in a low voice, “Japan is susceptible to U.S. influence.” Ms. Abe commented: “I then understood why we had been ignored for ten years and why relief for A-bomb survivors was still long in coming. That’s when I wrote the poem.” On the night train bound for Hiroshima, Ms. Abe scratched her pencil across a sheet of rough paper, producing these lines:

“Please put a warm hand, like sunlight at ten in the morning, / on survivors whose forgotten smiles lie somewhere in the distance / due to their grief and sorrow, / so they can continue to believe that it’s good to be alive.”

The participants of the journey were disappointed all the more because they had built up their expectations. Looking back on the trip, Heiichi Fujii, who served as leader of the group, said, “After we returned from Tokyo, everyone began to take action in earnest.” (Mr. Fujii died in 1996.)

The atomic bombing annihilated all aspects of the city. However, the “reconstruction” of the survivors’ lives had come to vary with the passing of ten years since the blast. Although an organization of A-bomb sufferers was established, the members’ actions naturally varied as well. In the wake of the petition that fell short of expectations, the view spread that united action needed to be pursued in order to move the Japanese government.

Two months later, in May 1956, the Hiroshima Prefectural Confederation of A-bomb Sufferers Organizations was formed, while the Japan Confederation of A- and H-bomb Sufferers Organizations was established at the second World Conference Against A & H Bombs, held in the city of Nagasaki in August, which brought together A-bomb sufferers from various locations.

Ms. Abe’s poem was recited at the world conference, and Ms. Takano, who mounted the platform as a representative of A-bomb survivors in Hiroshima, expressed the resolve: “If we do not survive, who will maintain this campaign?” A-bomb survivors were continuing to die due to “A-bomb diseases,” including leukemia.