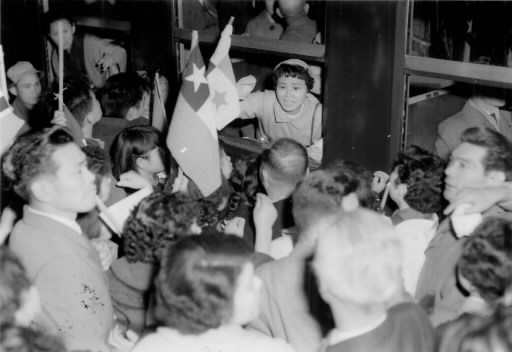 “In light of the unique health conditions of the A-bomb survivors, which have persisted, the Japanese government will provide them with health checkups and medical treatment.” In April 1957, the Atomic Bomb Medical Relief Law, which included these words, finally came into force. Relief measures for A-bomb sufferers, who had lost parents, children, and other loved ones, and who had feared they would succumb to disease as a consequence of their exposure to the bomb’s damaging radiation, at last reached an initial stage.

In the previous year, Yoshiko Takano (maiden name, Murato), now 73, a resident of Higashi Ward, Hiroshima, took three trips to Tokyo by train—a journey of more than 17 hours—in pursuit of a law to aid the atomic bomb sufferers and effect a ban on atomic bomb and hydrogen bomb tests. During these trips, Ms. Takano met with Prime Minister Ichiro Hatoyama and his wife in March as one of a group of A-bomb survivors petitioning the Diet; petitioned the former Ministry of Health and Welfare in June, the month following the establishment of the Hiroshima Prefectural Confederation of A-bomb Sufferers Organizations; and visited the headquarters of the Asahi Shimbun in Tokyo in September, the month following the establishment of the Japan Confederation of A- and H-bomb Sufferers Organizations.

“It’s good to be alive.” These words welled up from deep in Ms. Takano’s heart immediately after sharing her account of the atomic bombing at the World Conference Against A & H Bombs in 1955. Were her efforts based on a feeling that the A-bomb survivors’ movement was charged with the mission of helping to create a world where she could truly believe that “it’s good to be alive”? She responded in this way:

“I presented myself to the public because I didn’t want anyone else in the world to suffer from nuclear bombs and experience such sorrow. Without those feelings, I would not have been able to put my heart and soul into the movement.”

Ms. Takano was one of those who were quick to share their experiences of the atomic bombing in Europe. However, her journeys to share her A-bomb account involved continuous difficulties. This is because the Japanese government regarded the appeals of A-bomb survivors and others involved in campaigns against atomic and hydrogen bombs as part of an “anti-American movement.”

In March 1957 news of a planned hydrogen bomb test by the United Kingdom on Christmas Island in the South Pacific was met by a sit-in protest against the nuclear test by A-bomb survivors and others in front of the Cenotaph for the A-bomb Victims in Hiroshima Peace Memorial Park. That demonstration marked the beginning of a long series of protests that have taken place ever since in response to nuclear tests. The Japan Council against Atomic and Hydrogen Bombs also decided to dispatch a “national delegation” to the nuclear weapon states of the United States, the United Kingdom, and Russia. Ichiro Moritaki, then 56, a co-chairperson of the Japan Confederation of A- and H-bomb Sufferers Organizations and a professor at Hiroshima University, was selected as a delegate, among others, and left Hiroshima at the end of June.


Stranded in Tokyo
The delegates, however, became stranded in Tokyo. The Ministry of Foreign Affairs of Japan (MOFA) would not issue them passports, as the government was “dead set against our visit to the United States and the United Kingdom,” according to Professor Moritaki’s diary entry of July 5, 1957. The problem involving the group’s passports suddenly stirred the interest of the public.

Ms. Takano hurried to Tokyo to lend support to the delegates. In a news photo taken at Tokyo station, she walks at the head of a crowd carrying a banner that reads: “Delegates of A-bomb Survivors in Japan.” A petition demanding that the passports be issued to the delegates included the signatures of movie stars and other well-known figures, including the actor Musei Tokugawa and the writer Saneatsu Mushanokoji, who were moved by the documentary film “Ikiteite Yokatta” (“It’s Good to Be Alive”). They called for a fundraising campaign and met and talked with Ms. Takano. The incident revealed that a broad swath of the public was sympathetic toward the campaign to convey the reality of the atomic bombings. The passports of the delegates were finally issued on August 1, and Professor Moritaki left for the United Kingdom.

“I remember the consideration Professor Moritaki showed to me, as my own dispatch to Europe, which had been decided before his dispatch, was postponed,” Ms. Takano said. For her, the A-bomb survivors’ movement was also a way of sharing feelings with others as human beings.

In March of the next year, 1958, Ms. Takano, along with the international department manager of the All-Japan Federation of Students Self-Government Associations, attended a preparatory meeting in Sweden for a peace and friendship festival that would bring together young people from across the world. During the trip, she also toured Italy, West Germany, France, Czechoslovakia, and Hungary. After completing her journey to share her A-bomb account, Ms. Takano shared her impressions back in Hiroshima in an interview with the Chugoku Shimbun on May 13: “The people of Europe are mindful of the horror of atomic and hydrogen bombs, but they don’t know the reality of the damage such bombs can produce.”


Landing work after returning to Japan
“This is the passport I used then.” Ms. Takano opened the passport, retrieved from her possessions. It was issued three days before she left Japan. A stamp that reads “simplified issuance at the Ministry of Foreign Affairs” is affixed to the passport. In the fall of that year, Ms. Takano was invited by a labor union in West Germany to take part in several events in that nation, including meetings to express opposition to atomic and hydrogen bombs. She would be accompanied by a female friend, another A-bomb survivor. The Ministry of Foreign Affairs was again reluctant to provide her with the necessary passport. As the Chugoku Shimbun reported on November 7 of that year: “Her words and deeds at home and abroad have been deemed undesirable.”

“When people overseas look at me, they see what an atomic bomb can do,” Ms. Takano said. “I was just being earnest in my activities back then and I didn’t pay attention to the fact that the Japanese government viewed me in a biased way.” With regard to a thoughtless notation in her passport that reads “Characteristics: Burn scars on face,” she looked back on those days and seemed to dismiss the description with the words: “My scars were more raw then and that was the reason I was dispatched.”

In writer Kenzaburo Oe’s book “Hiroshima Noto” (“Hiroshima Notes”), first published in 1965, Ms. Takano is described as “a typical example of A-bomb survivors who will not surrender.” She also appeared in a TV special produced by the Hiroshima branch of NHK, Japan’s public TV broadcaster, in the summer marking 20 years since the atomic bombing.

Eventually, though, Ms. Takano left the A-bomb survivors’ movement. Her disenchantment stemmed from the fact that the World Conference Against A & H Bombs, which provided her with the first opportunity to share her A-bomb experience, ultimately split into two factions due to differing aims and squabbling among political parties and labor unions.