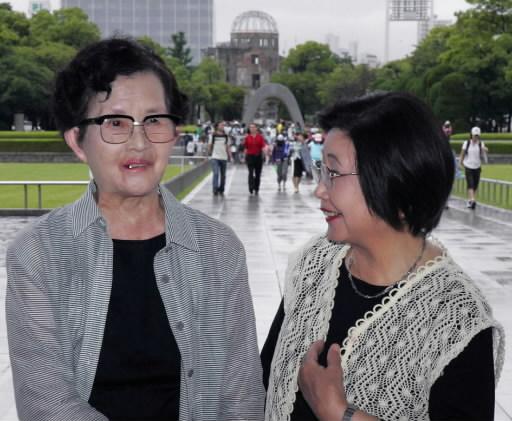 “I found it intolerable that the appeals made by A-bomb survivors were being coopted for other purposes,” said Yoshiko Takano (maiden name, Murato), 73, a resident of Higashi Ward, Hiroshima. Speaking in a tone of regret, she talked about the time when she decided to leave the forefront of the A-bomb survivors’ movement. That decision was due to a split in the campaign expressing opposition to atomic and hydrogen bombs and seeking relief efforts for A-bomb survivors.

The campaign against atomic and hydrogen bombs, which started amid national sympathy aroused by the “A- and H-bomb experiences” of Hiroshima, Nagasaki, and the Bikini Atoll, came to be transformed into a war of ideology among political parties and labor unions in 1960, when the issue of the revision of the Japan-U.S. Security Treaty shook the Japanese archipelago. The World Conference Against A & H Bombs, where Ms. Takano concluded her A-bomb testimony with deep emotion, saying, “It’s good to be alive,” became an arena for a divisive tug of war.

The two camps held conflicting views, one side saying “We oppose nuclear testing by any nation” while the other believing “It is wrongheaded to perceive nuclear testing by a socialist nation as in the same category as nuclear testing by the imperialist United States.” In August 1963, this conflict pitting the policies of the Socialist Party of Japan, on one hand, and the Communist Party, on the other, boiled over and finally led to the split of the World Conference Against A & H Bombs. Moreover, members of the All-Japan Federation of Students’ Self-Governing Associations occupied the conference venue by congregating in front of the Cenotaph for the A-bomb Victims, and the police were called in to quell the disturbance. Hiroshima Peace Memorial Park, where people were supposed to share the same vow to realize peace, turned into a site of hostility where both sides reproached one another as a consequence of their diverging views.


Citizens turn their backs on the movement
“The arguments were dogmatic and encouraged exclusion,” recalled Makoto Kitanishi, 80, a professor emeritus at Hiroshima University who was in the midst of the chaos as assistant secretary general of the Hiroshima Council against Atomic and Hydrogen Bombs. “The egoism of the factions left A-bomb survivors behind and citizens turned their backs on the movement as well.”

In 1964, in the wake of the split in the campaign against atomic and hydrogen bombs, the Hiroshima Prefectural Confederation of A-bomb Sufferers Organizations in the A-bombed city of Hiroshima also split into two factions still bearing the same name, and the two factions have remained as such to this day. Politics ended up pulling in the A-bomb survivors and tearing them apart. Ms. Takano, who took neither side in the struggle, chose to leave the movement and she began to decline requests for interviews by the mass media. She then became one of the large number of “silent” A-bomb survivors.

The Japan Confederation of A- and H-bomb Sufferers Organizations, in the aftermath of the split in the campaign against atomic and hydrogen bombs and the campaign’s slowdown, persevered in its appeals for the enactment of a law that would bring aid to the atomic bomb survivors. In December 1994, in anticipation of the 50th anniversary of the atomic bombing, the “Atomic Bomb Survivors Relief Law” was finally established under a coalition government composed of several parties, including the Liberal Democratic Party and the Socialist Party.

However, the request for “national redress,” which had been sought by the A-bomb survivors’ movement, was rebuffed. The road remained long with regard to compensating all the victims of the atomic bombing, including the family members of those who died in the blast, which was a wish imbued in the term “A-bomb Sufferers” Organizations.

Successive Japanese administrations have continued to rely on the U.S. “nuclear umbrella” for the nation’s security, meanwhile intoning that Japan is “the only nation to have suffered nuclear attack.” The grassroots peace movement, which originates in the A-bomb experience, will wane over time as the memory of the war fades. The average age of the A-bomb survivors has now reached 73 and, as a natural consequence, the vigor of the movement is weakening.

Ms. Takano took a breath and said, “Because I left the movement, I’m not in a position to criticize it.” She continued: “Thanks to those who have taken part in the movement, the Atomic Bomb Survivors Relief Law was realized, and our experiences and wishes are being conveyed.” When these people make themselves known by appealing to the public, they find themselves in the public eye, and even the target of slanderous attention. She is well aware of the fact that A-bomb survivors in the forefront of the movement have been subject to such scrutiny and slurs.

When Ms. Takano was doing clerical work at a hospital in Hiroshima, she met a man two years older than her, a company employee, who “just saw me as a woman.” They eventually married and had a child. Since then she has lived a quiet life, taking care of her family. For the past 40 years, while away from the movement, she has made no public remarks, but has come to feel that she “cannot remain indifferent.”


Heartfelt appeal of human beings
In response to questions about the A-bomb survivors’ movement, which has pressed on for more than half a century, Ms. Takano offered the following comments:

“Even the noncombatants, including students and non-Japanese, such as South Koreans and North Koreans, could not escape from the atomic bombing. Sixty years have passed, but I’m still terrified about the radiation that lingers in my body. If it hadn’t been for the war, there wouldn’t be such sorrow. Such sorrow must never be repeated.”

In mid-June, when my first interview with Ms. Takano was completed, I invited her to accompany me to Peace Memorial Park, located in the heart of Hiroshima. There, we met with Shizuko Abe, 79, who lives in Kaita Town in Hiroshima Prefecture. Ms. Abe began to share her experience of the atomic bombing with students visiting Hiroshima on school trips, among others, when she was in her 50s. The two women first met as members of the group of A-bomb survivors who petitioned the Diet half a century ago. They have been on friendly terms ever since.

Over a meal we shared, I took the liberty of asking them whether taking part in the A-bomb survivors’ movement had been a positive move in their lives. Ms. Abe replied, “I felt encouraged by it,” to which Ms. Takano, with a smile, expressed her agreement, saying, “That’s very true.” After all their hard striving, they had arrived at a place where they truly feel: “It’s good to be alive.” (Originally published on July 8, 2006)
ツイート
Return