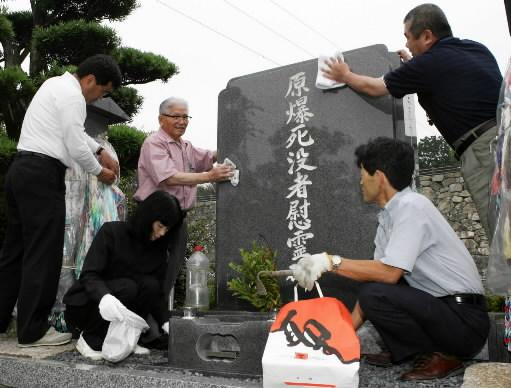 On a sunny Sunday morning during a lull in the rainy season, four middle-aged men and women were sweeping the area around the “Memorial for the Victims of the Atomic Bombing” which stands near the north exit of Mihara train station in the city of Mihara, Hiroshima Prefecture.

Kyoko Hiraki, 52, a housewife from Mihara, explained, “As I'm busy with my work and housework, I can't usually take part in this activity on weekdays. I began volunteering because I thought I should at least help to clean the area when I'm free.” Masao Hoyama, 77, Ms. Hiraki’s father, was also engaged in the clean-up with the hope that “Others will come forward to carry on the work of our group, while we're still in good health.”

Mr. Hoyama is secretary general of the “A-bomb Sufferers Organization in Mihara City.” While working aboard a train for the Japan National Railway, he was exposed to the radiation of the atomic bombing of Hiroshima in the aftermath of the blast. He has been a member of the organization since it was established in 1956.

The group, which had more than 900 members in the late 1970s, now has about 500 members. The number of members who attend the Peace Memorial Ceremony, held annually on August 6 by the City of Hiroshima, has also been declining year by year. Mr. Hoyama and fellow members of the group took great pains to build the “Memorial for the Victims of the Atomic Bombing” in their hometown three years ago. They subsequently made efforts to form a sub-group of second-generation A-bomb survivors, which was established in 2004.


Lack of awareness among second-generation survivors
“We hope that you will carry on our spirit of never wanting to see war or atomic bombings again, and that you will preserve the memorial in Mihara.” With this wish of Mihara's first-generation A-bomb survivors, about 150 people joined the sub-group of second-generation A-bomb survivors. However, when the group was set to begin its work, it turned out that most of the members had been signed up by their parents, who submitted their children's names.

Of the 54 local branches that make up the Hiroshima Prefectural Confederation of A-bomb Sufferers Organizations, chaired by Sunao Tsuboi, only eight branches have sub-groups of second-generation A-bomb survivors. These include the branch in Mirasaka Town in Miyoshi City, which set up such a group seven years ago, and which was followed by the branches in the cities of Mihara, Fukuyama, and Higashi-hiroshima. The city of Hiroshima currently has no group of second-generation A-bomb survivors. The other faction of the Hiroshima Prefectural Confederation of A-bomb Sufferers Organizations, chaired by Kazushi Kaneko, has formed a sub-group of second- and third-generation A-bomb sufferers. However, executive members of labor unions and the faction’s friendly organizations double as senior officials of the group. All these groups admit that “Our activities have not grown.”


A-bomb effects yet to be clarified
The Radiation Effects Research Foundation (RERF) in Minami Ward, Hiroshima, has continued to conduct research on the genetic effects of radiation on second-generation A-bomb survivors and followed their longevity since 1948, when it was still the Atomic Bomb Casualty Commission (ABCC), RERF's predecessor. To date, no statistically-significant differences between children of A-bomb survivors and those of non-A-bomb survivors have been found. Nori Nakamura, 59, chair of the Department of Genetics at RERF, thinks, “We have not proclaimed this to be fact. It’s just that we have no concrete evidence to support such a conclusion. It will take another 20 years, at least, to fulfill this genetic research.” In other words, the reality of the atomic bombing, including its impact on second-generation A-bomb survivors, has yet to be clarified.

Mr. Hoyama, who hopes to pass the baton to second-generation A-bomb survivors, wore a gloomy look when the conversation turned to the question of genetic effects. When the second of his three married daughters came down with liver disease, he flashed back to the atomic bombing and the thought brought him distress. “Does it have something to do with my daughter's condition, after all?” Mr. Hoyama said. “I don't want them to inherit my worries.” He has mixed feelings about asking his own children to hand down his A-bomb experience.

Mr. Hoyama is undergoing treatment for kidney disease and lives with Ms. Hiraki. She has watched him running about town on his small motorbike to provide a helping hand to the members of the organization and the families of those who died in the bombing and to make arrangements to erect the memorial. Since she assumed the role of accountant for the group of second-generation A-bomb survivors, she has naturally had more opportunity to talk with her father about the A-bomb experience.

Mr. Hoyama said, “Even if I tell my three children that ‘peace is important,’ it won’t click in their minds. But if I talk about it in the context of our family history, I can surely get something across.” As second-generation A-bomb survivors, including Ms. Hiraki, grew to know the efforts made by first-generation A-bomb survivors, they came to think that conveying the A-bomb experience was also an effort to build the future.