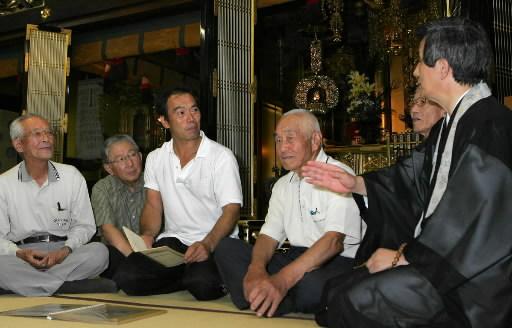 As the summer sun began to set, men with Buddhist rosaries in their hands passed, one after another, through the gate of Jogyoji Temple in the Kawauchi area of Asaminami Ward, Hiroshima. The men sat in a circle and put their hands together in prayer in front of a statue of the Buddha. A voice asked: “Who will serve as facilitator this year?” And so began their discussion about the “Memorial Service for the Kawauchi Volunteer Citizen Corps” that will be held in Hiroshima Peace Memorial Park on August 6 of this year. Kawauchi, famous for its production of leafy vegetables, has long been called “an A-bombed town.”

On August 6, 1945, the Kawauchi Volunteer Citizen Corps was working in the Nakajima district (now, the neighborhood of Hiroshima Peace Memorial Park), ten kilometers south of Kawauchi along the Ota River. The corps members were mobilized there for the war effort, demolishing buildings to create a fire lane. They all perished in the blast. According to a list of names of the Kawauchi Volunteer Citizen Corps that was compiled by the village office and is housed in the Hiroshima Prefectural Social Support Bureau, 183 corps members fell victim to the bombing. Another authority counts the number of victims at more than 200. In the town of roughly 250 households, a large number of wives and children were left behind without breadwinners. The days of hardship continued even long after the war ended.


Since his grandfather’s generation
“I regret that I survived.” Toshiki Kamimura, 52, a farmer, who assumed the role of facilitator of the memorial service for the first time as someone from the postwar generation, had grown up hearing his grandfather Shigeru repeat this sentiment since he was a small child. Shigeru, who died in 1981 at the age of 86, had been the squad leader of the Kawauchi Volunteer Citizen Corps. At the time of the bombing, though, he was in the hospital with appendicitis, and his oldest daughter, Shizumi, 21, took his place in the corps that day and was killed in the blast.

Grief-stricken over the loss of his daughter and disconsolate about forsaking his fellow corps members to the same fate, Shigeru built a memorial to them in 1946. The memorial, made of wood from the zelkova tree, was erected at a site in the Nakajima district where a temple once stood, a spot where the members of the Kawauchi Volunteer Citizen Corps used to put their belongings, including their lunch boxes. There, Shigeru began holding a memorial service. He also exerted himself to raise a stone memorial in 1964 which now stands on the left bank of the Honkawa River, flowing near the park.

Mr. Kamimura, thinking that he couldn't let the memorial service fade away, took over the role of facilitator from his father Tetsuo last year, when Tetsuo turned 80. Tetsuo had assumed the role following Shigeru's death.


Memorial events are being suspended
Memorial services that have been held in the A-bomb city of Hiroshima for decades, events staged with strenuous effort, now stand at a crossroads as the families of those who died in the bombing have aged. In the year following the 50th anniversary of the atomic bombing, Hiroshima Prefecture modified its policy and adopted a system of voluntary participation in the memorial service for the A-bomb victims of prefectural employees. The Hiroshima Gas Company, which lost 69 employees as a result of the blast and had been keeping the company shuttered every August 6, suspended that practice in the same year. The company's public relations department said: “The number of local companies that are closed to business on August 6 has declined, a situation that had begun to affect our operations.”

The Hiroshima City A-bomb Survivors’ Council, chaired by Hiroshima Mayor Tadatoshi Akiba, abolished the subsidy for memorial services three years ago that had been directed to the 55 branches of the council in the city, on the grounds that the number of applications for the subsidy had dwindled to 14. It is said that no objection was raised to this move. The branches in Hijiyama (Minami Ward), Aosaki (Minami Ward), and Saeki (Saeki Ward), areas where people were accommodated in the aftermath of the blast, have stopped holding memorial events. Yasuhiro Masuda, 62, the secretary general of the council, said, “If only some people would volunteer to help...” In fact, 21 branches are now inactive.

Mikio Kanda, 83, a resident of the town of Fuchu in Hiroshima, spent time in Kawauchi for a book he compiled, entitled “Genbaku ni Otto o Ubawarete” (“The Atomic Bomb Stole Away My Husband”), published in 1982. He explained that mourning for the victims was swiftly fading, linking the fact to the “transformation of the local community.”

Mr. Kanda suggested: “What about talking about the atomic bombing as our common regional history or as a topic of exchange among different generations? Abhorrence of war cannot be conveyed through ideological education. We need the chance to touch human feelings naturally, like water sinking into the earth, for us to mourn for the dead and cherish life.” With regard to areas that now face difficulty holding memorial services, he urged neighborhood associations and schools to rouse themselves to action.

Yutaka Takasaki, 79, was sitting by Mr. Kamimura and making arrangements for the memorial service. His mother Haru, who died in 1999 at the age of 97, was one of the members of “Shiraume Kai,” which was formed by wives whose husbands were killed in the atomic bombing and named after Japanese apricot trees with white blossoms. Haru did not fail to visit the temple on the 6th of every month until the day she died. “We have to convey the weight of the fact that nearly 200 people did not return to this small town,” Mr. Takasaki said. Mr. Kamimura nodded to the words of the former facilitator of the memorial service.

Kawauchi has become a bedroom community of Hiroshima, with its population of 1.05 million, and there are an increasing number of nuclear families. However, the town, on the 60th anniversary of the atomic bombing last year, held a Buddhist memorial service at the Jogyoji Temple on August 5, while about 200 people, including families with small children and local students of Jounan Junior High School, attended the memorial service initiated by Shigeru Kamimura.