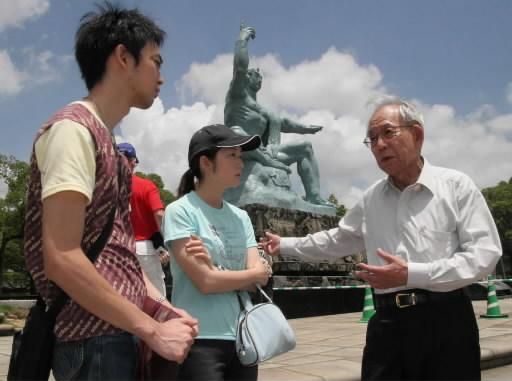 A document released by the Nagasaki Foundation for the Promotion of Peace, founded in part by the City of Nagasaki, sparked considerable controversy this year. The document discouraged A-bomb survivors, when talking about their A-bomb experiences, from “commenting on the following political issues,” listing eight points including the dispatch of Self Defense Force personnel to Iraq, discussion over a revision of the Constitution, and history education.


Concerns over politicization
After the document was shown, in January, to members of a group of 38 A-bomb survivors who share their testimonies of the bombings, local citizens groups and the Japan Confederation of A- and H-Bomb Suffers Organizations demanded that the document be retracted, contending that it was an infringement on free speech. The 38 survivors were put in an uncomfortable position until the foundation's general assembly was held in late June and its secretariat retracted the document, saying that it caused confusion. Last year, the foundation provided roughly 1,1oo opportunities for A-bomb survivors to speak about their experiences to mainly students on school trips.

When asked what exactly was intended by the “self-restraint” document, Mitsuyoshi Taira, 57, chief secretary of the foundation, commented, “We receive feedback from schools after their students have listened to the survivors’ testimonies. Some, although the number is only several a year, request that the content be kept neutral. It would be better to avoid politically-charged issues, and we were concerned that our foundation could be mistakenly regarded as a political organization.”

Of its annual budget amounting to 38 million yen, 83 percent is covered by a subsidy from the Nagasaki city government. Among the staff of nine, seven are dispatched by the city administration, including the chief secretary. The foundation is part of the city's peace efforts.

Yoshiro Yamawaki, 72, voiced his view about the document at the general assembly. “The secretariat tells us to talk only about our experiences, but it is far from enough just to say the atomic bombing was cruel.” After retiring from an electronics manufacturer, he joined the group of A-bomb survivors who share their testimonies, meeting with them for study sessions. When Mr. Yamawaki relates his account of the bombing, depending on the age and interest of the audience, he may also offer his own opinions about nuclear weapons and conflicts in the world.

In the aftermath of the Nagasaki bombing, Mr. Yamawaki searched for his father Yasuo, then 47, in the hypocenter area, trying to avoid stepping on the bodies strewn one over the other. Despite recounting this vivid experience, most of the feedback he was receiving consisted only of perfunctory comments like “Peace is important.” Pondering the situation, he decided to talk about his experiences in relation to present-day problems. He appeals to his audiences not to regard the atomic bombing as a thing of the past, and hopes people will make the most of his appeals to fulfill a better future.

Koichi Funakoe, 60, a professor at Nagasaki University and the head of a citizens’ group exploring how best to hand down A-bomb experiences, said that the appeals of “No More Hiroshimas, No More Nagasakis” will lack power unless they are linked to current issues. If pressure from the fear of objections and negative reactions comes to constrain such peace efforts, the tide of the times will submerge the appeals from Hiroshima and Nagasaki.


Reconciliation deemed a priority
Beyond Nagasaki, the City of Hiroshima is also trying to avoid stirring controversy. The International Peoples’ Tribunal on the Dropping of Atomic Bombs on Hiroshima and Nagasaki was held on July 16 and 17 in Hiroshima. The City of Hiroshima, however, refused to provide support for the event, despite a request from the executive committee, which consisted of A-bomb survivors and researchers. The city’s International Peace Promotion Department commented that pursuing criminal responsibility is incompatible with the spirit of reconciliation, an idea expressed in the peace declaration.

Toshiyuki Tanaka, 57, professor at the Hiroshima Peace Institute of Hiroshima City University and one of the proponents of the tribunal, said, “Leaving the responsibility for the atomic bombing unclear is related to the unwillingness to take responsibility for Japan’s aggression involving its Asian neighbors during the war.” Mr. Tanaka added: “By retreating to safe ground and avoiding troublesome frictions, Japan will close the door through which we can make our appeals to the world.”

The two A-bombed cities have often been compared, and references have been made to “angry Hiroshima and prayerful Nagasaki” due to the superficial difference of their appeals. In the 1960s, Time, a major American magazine, likened the two cities to A Tale of Two Cities.

As the years pass, the peace efforts of the two cities have fallen into step with each other, taking pains not to offend.

Dr. Tatsuichiro Akizuki, who died last year at the age of 89, was an A-bomb survivor and peace activist. When the foundation was established in 1983, he warned in a newsletter about sticking to a rigidly uniform mindset: “A diversity of views on peace will give rise to a strong and genuine peace.”