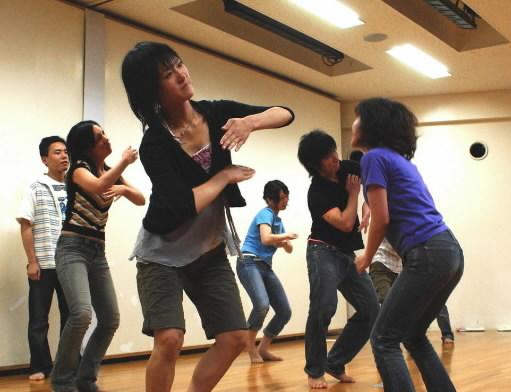 Students were making suggestions to one another: “Try the pronunciation of that line again.” “Why don't you walk like this since you have burns?” At Tokyo University of Foreign Studies, located in Fuchu, Tokyo, Urdu majors have been rehearsing for their performances of “Hiroshima Story,” to be held in September in Pakistan.

The play is based on “Barefoot Gen,” a manga series by Keiji Nakazawa, in which Gen, a boy whose father and sister were killed in the atomic bombing, grows up strong in spite of hardships.

The leader of the drama group is Yutaka Asada, 58, an associate professor in the department of Urdu, and 13 students make up the performers. Following performances given in India last year, they will head to Pakistan this year to present their plays at colleges and civic centers in the capital of Islamabad as well as the cities of Karachi and Lahore.

Mr. Yutaka has made many visits to India and Pakistan, two countries at odds due to territorial disputes. Both nations conducted nuclear tests in 1998 and now maintain nuclear arsenals. He has come to feel that although the atomic bombings of Hiroshima and Nagasaki are well known in that region, people there do not really know what actually took place under the mushroom clouds.


“I had mixed feelings...”
None of the drama group members are from Hiroshima or Nagasaki nor are they acquainted with any A-bomb survivors. Believing it was important to gain a better grasp of Gen's feelings, prior to their performances in India last September they visited Hiroshima Peace Memorial Museum and listened to the A-bomb account of Emiko Okada, 69, a survivor who has shared her experience of the bombing both in India and Pakistan before.

The members of the drama group were stunned when they saw the artifacts of the atomic bombing and heard Ms. Okada's personal experience. How the power of the atomic bomb destroyed the entire city, how the victims suffered terrible injuries and bore the brunt of prejudice--it all left them speechless. Rinko Sakai, 20, one of the students set to perform in Pakistan this year, recalled, “I had mixed feelings whether the members of our group, who have no firsthand experience of the war, could convey such an experience through our play.”

The group lacked confidence that they could portray the survivors' feelings. But it was the survivors themselves who encouraged the performers with these words: Please convey our experiences to the world.


Worries gradually faded
“All we can do is express Gen’s message in our own way,” thought Kiyoshi Masuda, 22. He used to spend summer vacations in his mother’s hometown of Kaita in Hiroshima Prefecture, but he had never seriously pondered the history of Hiroshima as an A-bombed city.

But the members of the drama group still had concerns when they arrived in India. Takuya Shimooka, 20, played the role of Gen’s father. “Our play shows the horror of nuclear weapons. It might invite negative reactions,” he thought. But his worries gradually faded after each performance in a new place.

Audiences would sit on the edge of their seats as they watched the play unfold, along with 30 slides showing the devastated city of Hiroshima and the survivors projected onto the stage backdrop. After the play, some audience members would come to the stage and tell them with tearful eyes: “It's absolutely wrong to resort to nuclear arms, no matter what.”

“Many people in India are opposed to holding nuclear weapons,” felt Yumiko Ishii, 21, who played the role of Gen, the protagonist of the play. The members of the drama group came to feel that the way Indian citizens thought about nuclear weapons was different from what was generally believed to be the case back in Japan. In all, they performed in ten cities in India.

At the time, they never imagined that they would perform in Pakistan. But when they showed the play to a Pakistani journalist visiting their university in October of last year, the journalist urged the students to go to Pakistan and show the play to the country’s youth. Thus, the students now feel that they can only bring their performances to a close after they have presented the play in both India and Pakistan, the two neighbors that have been at loggerheads since separating and becoming independent in 1947.

The students believe that Gen’s energy, which helps him to endure his hardships, along with the deep love of his family, will arouse empathy beyond national borders. With their desire to bring together India and Pakistan through the story of Gen, combined with the wish of the A-bomb survivors for the elimination of nuclear weapons, the students of Urdu are preparing for their performances in Pakistan.