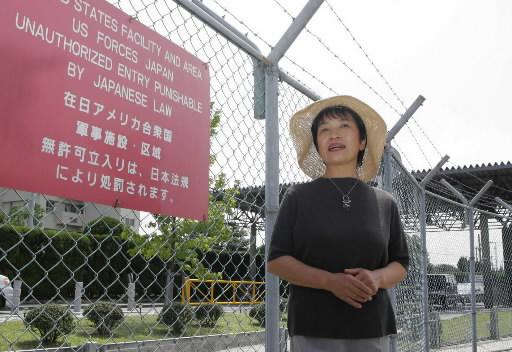 In the heart of downtown, the Stars and Stripes flutters in the wind. The U.S. Marine Corps Air Station Iwakuni lies only two kilometers south of the city's main train station. The front gate of the U.S. base is guarded by military personnel carrying guns. “Seeing this, no A-bomb survivor would be spared mixed emotions,” said Yoko Shimazaki, 62, with a sigh, as the Iwakuni resident stood in front of the air station.


Coexisting with the military base
The city of Iwakuni has been rocked by a government plan to relocate carrier-based aircraft from the Atsugi Naval Air Station in Kanagawa Prefecture to the Iwakuni Air Station. Iwakuni, located in Yamaguchi Prefecture, lies about 40 kilometers from Hiroshima. More than 1,320 people, or a quarter of the A-bomb survivors living in Yamaguchi Prefecture, hold the Atomic Bomb Survivor’s Certificate.

Ms. Shimazaki was exposed to the atomic bomb while at her home in Showa-machi, an area in downtown Hiroshima. On the day of the bombing, her elder sister was assigned to help dismantle buildings in order to create a fire lane in the event of air strikes. After the blast, she was brought to a relief shelter and there, delirious, she called Yoko's name again and again before passing away. She was 13. The following year, Ms. Shimazaki's family of five moved to Iwakuni. Her father Mitsuki Nakata, who was a painter, found a job painting signs to advertise movies. (Mr. Nakata died in 1996 at the age of 89.) Ms. Shimazaki grew up listening to how Hiroshima was devastated and how her sister died. Her father’s painting of a mother and a baby burned by heat rays is on display in Hiroshima Peace Memorial Museum.

Ms. Shimazaki has never been able to get out of her mind the fact that her city is home to a military base which belongs to the United States, a nation which embraces the power of nuclear weapons.

In 1981, Edwin Reischauer, a former U.S. ambassador to Japan, disclosed that an oral agreement was made between Japan and the United States when the Japan-U.S. Security Treaty was revised in 1960, enabling U.S. vessels carrying nuclear weapons to make stopovers in Japan. Following his statement, other former U.S. government officials admitted that nuclear weapons had actually been brought into Japanese territory. Voices were then raised questioning the Japanese government’s three non-nuclear principles: Japan shall neither possess nor manufacture nuclear weapons nor permit their introduction into Japanese territory.

The Iwakuni City Council has taken up nuclear suspicions each time a statement was made in relation to the issue, but without successfully sparking a wider debate. Former member of the council Yukiharu Nakamura, 82, was exposed to residual radiation upon entering Hiroshima after the bombing. Reflecting on the base in Iwakuni, he said, “The economic benefits brought by the air station helped the city recover from the damage it suffered during the war. That's why people have been reluctant to discuss removing the air station. There was no way of gaining access to military secrets, either.”

But there is something different about the situation this time. In October of last year, the Japanese government decided to transfer 57 of the carrier-based aircraft currently at the Atsugi Naval Air Station to the air station in Iwakuni, disregarding the wishes of local residents. (The number of aircraft was later increased by two.) If the plan is carried out, the Iwakuni air station will have one of the largest squadrons of aircraft in the Far East. Civic groups were formed one after another to demand that the plan be withdrawn. This campaign reached Hiroshima, too. An overwhelming vote was cast against the plan in a referendum held on March 12 right before the city merged with neighboring towns.

Ms. Shimazaki was deeply moved that she could finally express her opinion about the problem of the air station and circled “No” on her ballot. Still, she feels that the debate over the air station has not gone far enough. Although local residents said “No” to the aircraft transfer plan, they are still seeking to coexist with the base.

Kiyoshi Okawa, 48, is the director of a kindergarten and the leader of a citizens’ group that is urging the national government to respect the results of the referendum. Analyzing the situation, he commented: “Iwakuni has been forced to coexist with the air station, shackled by such political issues as employment and government subsidies for municipalities hosting U.S. military bases. If removing the base entirely becomes the agenda, it would not be easy for such a movement to gain momentum.” In reality, the daily lives of Iwakuni residents have become closely intertwined with the air station.


No silver bullet
It is not only citizens of Iwakuni who support the idea of having U.S. military bases in Japan. In an opinion poll on security issues conducted by the Cabinet Office in February, 76 percent of the respondents agreed that the security of Japan should be ensured by the Japan-U.S. security arrangements and the Self-Defense Forces of Japan, showing an increase in percentage points from three years ago.

A contradiction exists, however, for while the public is dependent on the United States for the nation's security, it also continues to support the three non-nuclear principles.

“Isn’t there a way to maintain security without depending on military forces?” Ms. Shimazaki wondered. “Each and every person in Iwakuni and Hiroshima should take the realignment of U.S. forces in Japan as an occasion to seriously consider the issues of military bases, nuclear weapons, and security. That being said, I am having a hard time arriving at a solution myself,” she added, standing by the fence of the air station. Her face revealed the conflicting emotions she continues to feel.