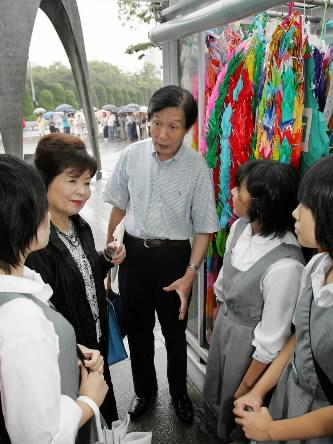 On July 24, in front of the Children's Peace Monument standing in Hiroshima Peace Memorial Park, a ceremony was held with about 600 students from the city and its outlying areas. Shinichiro Kurose, 65, former principal of Jogakuin Junior and Senior High School, was there to speak to children who were offering paper cranes to the memorial. “Sadako's classmates and a man named Ichiro Kawamoto called for this memorial to be raised,” he said.

The girl Mr. Kurose mentioned is Sadako Sasaki. Sadako succumbed to radiation-induced leukemia in 1955, ten years after her exposure to the atomic bombing. She was 12 years old when she died. The establishment of the monument gathered momentum when, a month after her death, her former classmates at Noboricho Elementary School distributed flyers at a conference of the National Junior High School Principals Association, which was being held in Hiroshima, calling for the construction of the Children’s Peace Monument.


Making efforts with children
Ichiro Kawamoto proposed handing out the flyers. After learning about the death of Sadako, he visited some of her former classmates. They formed the Hiroshima Paper Crane Club in 1958, in conjunction with the unveiling of the new monument. With students of elementary, junior high, and senior high schools taking the leading role in the club's efforts, Mr. Kawamoto, committed to peace activities as an ordinary citizen, assisted them until his death at the age of 72.

Mr. Kurose had chosen to take part in the event at the children's memorial with the hope that the activities pursued by Mr. Kawamoto and the children could be carried on. Last year, Mr. Kurose established the Children’s Peace Monument and Paper Crane Club, setting its headquarters at his home in Higashi Ward.

But most of the club's 180 members are acquaintances of Mr. and Mrs. Kurose. “I wish children could serve as the main force of the group and adults would assist them,” Mr. Kurose said. As he has no students in the club at present, Mr. Kurose is again struck by the extraordinary nature of Mr. Kawamoto, who was able to shepherd the Paper Crane Club with students at the helm.

Mr. Kawamoto was born in Peru, to where his parents had immigrated from Japan. However, his parents died when he was a child. In the summer of his 16th year, Mr. Kawamoto was back in Japan and working in Saka Town, Hiroshima Prefecture. In the aftermath of the atomic bombing, he was exposed to radiation when he entered downtown Hiroshima from Saka Town to aid the relief efforts. After the war, he began living in a shack by the Atomic Bomb Dome. With Kiyoshi Kikkawa (who died in 1986), who lived alongside him, he formed a group for A-bomb survivors, among the first of its kind. Mr. Kawamoto then committed himself to working with children.

“Only the Atomic Bomb Dome, as a painful reminder of the past, can convey the horror of the atomic bombing to the world long into the future,” Hiroko Kajiyama wrote in her diary. Hiroko was another child of Hiroshima who passed away, at 16, due to leukemia. In 1960, the members of the Paper Crane Club appealed for the preservation of the dome, which had inspired debate over its preservation or demolition. The City of Hiroshima ultimately decided to preserve it six years later.

Working as a school janitor at Jogakuin Junior and Senior High School, Mr. Kawamoto traveled about on his bicycle, which held a box of paper cranes, until age set in. Mr. Kawamoto and the succeeding children of the Paper Crane Club would offer paper cranes and messages of peace to politicians, cultural figures, and A-bomb survivors living in South Korea who visited Hiroshima for medical treatment.

“Mr. Kawamoto was adamant, saying that 'people who don't try to understand will never understand,'” said Mr. Kurose. His wife Teiko, 67, recalled Mr. Kawamoto and said, “He maintained his activities with a belief in the kindness of children.”

Mr. and Mrs. Kurose supported Mr. Kawamoto's efforts by making Japanese translations of the English letters that he received. One letter, in particular, stirs in them a vivid memory. It read: “I was ready to hear voices of bitterness at Hiroshima Station, but children there put a lei of paper cranes around my neck. I was very moved.” Through these experiences, the couple came to understand the power of continuous and daily efforts. They now seek, with more energy than ever, to revitalize the Paper Crane Club.

“Mr. Kawamoto continued to do what he could. I hope people will recognize and share his passion,” said Kiyo Okura, 65, who folded paper cranes in the same hospital room with Sadako Sasaki. Mr. Okura, a resident of Tokyo, is a founding member of the Paper Crane Club.

Ms. Okura established the Sadako Rainbow Foundation this past February. The foundation is contributing toward a medical support fund for Iraqi children who are suffering from leukemia, suspected of being a consequence of depleted uranium shells. Ms. Okura, an A-bomb survivor, is battling cancer now, too. She said, “I hope to help the sick Iraqi children, who are like Sadako, as much as I can.” Ms. Okura remains committed to the activity that sprang from a personal motivation. [Kiyo Okura passed away in 2008 at the age of 67.]