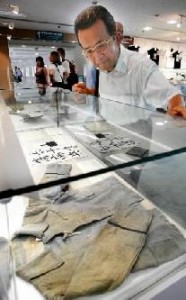 Mitsuo Kodama, 73, a resident of Minami Ward, Hiroshima has shared his experience of the atomic bombing since last summer by posting his account entitled “The Day the Mushroom Cloud is Gone” on his website. Upon retirement, at the age of 60, from a real estate agency located in Tokyo, Mr. Kodama was diagnosed with colon cancer. Since then he has undergone 14 operations.

Mr. Kodama was exposed to the atomic bombing while inside a building on the grounds of Hiroshima First Middle School (present-day Kokutaiji High School), 900 meters from the hypocenter. Most of the roughly 300 first-year students perished in the blast, with only 18 students able to return to school. Mr. Kodama offers the raw truth of his experience, revealing that he had no choice but to leave his classmates behind, pinned beneath the collapsed building.

On the homepage of his website, Mr. Kodama writes: “I hope that young people will understand what the atomic bomb has brought about.” He goes on to relate the fact that the trauma of body and mind that the A-bomb survivors suffered has never really healed. This is because nuclear weapons, which raised the “mushroom cloud,” continue to endanger the world.


A-bomb accounts on the Internet are few
How many websites are there sharing the accounts of A-bomb survivors, to which the world can access through the Internet? Searching on the term “A-bomb account” on Yahoo Japan resulted in a list of only five websites. A Yahoo official explained that “about 500,000 websites are accessible from Yahoo,” which means the number of sites focusing on A-bomb experiences remain a drop in the ocean.

Hiroshima National Peace Memorial Hall for the Atomic Bomb Victims, constructed in Hiroshima Peace Memorial Park four years ago, has collected a total of about 114,000 written accounts nationwide and compiled these essays in a database. The accounts include about 80,000 essays written in 1995, the 50th year of bombing, when research was being conducted on the actual conditions of the A-bomb survivors. But the hall has not pursued the idea of conveying these written accounts over the Internet, saying, “The original plan for the facility did not incorporate this idea.” So people have no choice but to visit the hall to read them.

The Hiroshima Peace Site, operated by Hiroshima Peace Memorial Museum as an effort of the City of Hiroshima, attracted about 2,820,000 visits last year, a ten-fold increase over the past five years. Among these visits, about 40 percent are accessing the English site. Although the site includes a wealth of content, some 19,000 items, which reveals the reality of the atomic bombing, most of the explanations of the museum's collected materials are available only in Japanese. The vice director of the museum, Akira Tanigawa, 49, said with a look of frustration: “There are so many materials. Translating the information takes a lot of time and money. I wish we could at least address the photographs of the atomic bombing.”

Anna Ogasawara, 19, is a sophomore at Ehime University in the city of Matsuyama, which lies south of Hiroshima across the Seto Inland Sea. She took up the challenge of translating some A-bomb accounts this year. Ms. Ogasawara and her classmates in their peace studies course made English translations of the 36 written accounts found in the book “The Atomic Bombing: Sixty Years of Lamentation,” published by the Ehime Prefecture Atomic Bomb Sufferers’ Association last year.

Ms. Ogasawara translated the essay written by Genta Kajikawa, 84, who, as a soldier, handled the bodies of A-bomb victims. She met with Mr. Kajikawa a number of times and carefully read his account of the bombing. She said, “Translating his essay made me realize that the horror of the atomic bombing has left deep emotional scars on the survivors, even after 60 years. Since then, I have come to feel that I can't just be a bystander.” Ms. Ogasawara and some A-bomb survivors from Ehime Prefecture took part in the World Peace Forum held in Canada this past June, and distributed the English version of the book.


Addressing the atomic bombing
Toshihiro Wada, 43, the assistant professor who served to guide the translation project, saw a change in his students as a result of their encounters with the survivors' accounts. He said, “By grasping the reality of the A-bomb damage, which had been only dry facts for them before, they have come to devise their own ways of addressing this issue.” For example, some of the students conducted an email survey on the awareness of nuclear issues among college students inside and outside Japan, while others put A-bomb poems into Braille.

Mr. Kajikawa said, “I had thought that young people were indifferent to war and the atomic bombing, but they listened to me attentively. It overwhelms me that my experience has been conveyed to people overseas.”

The August 6 anniversary of the bombing again approaches. Mr. Kodama is preparing to post on his website the accounts of six of his former classmates who are suffering, like himself, the aftereffects of radiation. He said, “As someone who just barely survived the bombing, I want to convey these experiences on behalf of my friends who died such regrettable deaths. This is my last task.”

The atomic bombing is not past history. Over 20,000 nuclear weapons still exist on the earth and serve to attract additional nations to possess them. The A-bomb survivors launched their campaign to create a world in which they can feel glad to have survived. Each one of them has been committed to this vision. It is our responsibility to see that the world today is brought closer, even one step closer, to the ideal sought by the A-bomb survivors.