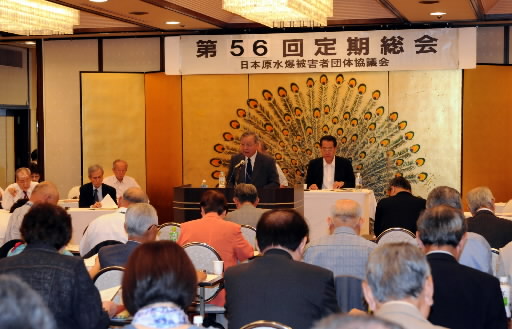 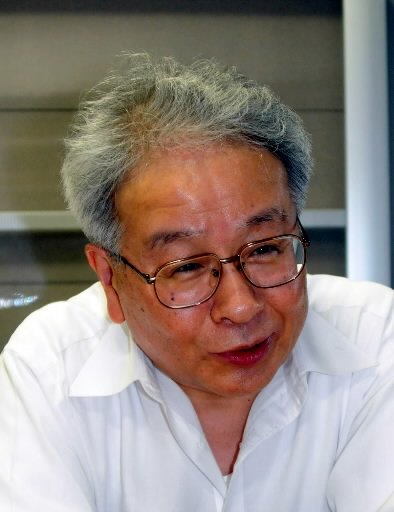 
Stronger call to abandon nuclear energy
Formed in 1956 and headquartered in Tokyo, the Japan Confederation of A- and H-Bomb Sufferers Organization (Nihon Hidankyo) is the only nationwide organization composed of survivors of the atomic bombings of Hiroshima and Nagasaki. This year, the 55th anniversary of the group’s formation, Nihon Hidankyo shifted its focus to the effort to obtain state compensation for the harm resulting from the atomic bombings. And since the accident at the Fukushima No. 1 (Daiichi) nuclear power plant, the organization has also strengthened its call for the nation to abandon nuclear energy. In this report the Chugoku Shimbun looks at the status of the movement carried out by the atomic bomb survivors, whose average age now exceeds 76, and the outlook for its future.

Nihon Hidankyo’s 56th regular general meeting was held at a hotel in Tokyo on June 7 and 8. More than 110 atomic bomb survivors from throughout Japan attended. The most important item on the agenda was the decision to request an amendment to the Atomic Bomb Survivors Relief Law, which was enacted in 1994. The organization had debated the issue for more than a year.

The atomic bomb survivors’ request means seeking state compensation for all of the harm caused by the atomic bombings, not only disorders resulting from radiation as stipulated in the current law, but also including harm resulting from thermal rays and the blasts. This could result in a new definition of “atomic bomb survivor,” which has thus far been limited to those who suffered harm from radiation. Hidankyo’s request is not predicated on the continued existence of the A-bomb disease certification system either. Debate on the issue went on for more than an hour and a half, but it was approved without delving into the request as deeply as the organization’s leadership had hoped for.

Kota Kiya, 70, secretary general of the Hiroshima Hidankyo (chair Sunao Tsuboi), recalled, “When the current law was enacted there was a lot of anger about the fact that state compensation was not included in its provisions, but I don’t sense that much enthusiasm.” Sueichi Kido, 71, assistant secretary general of Nihon Hidankyo, said as if to remind himself, “We have made our request, but that is not the end of it. I would like all of us survivors to reveal ourselves as we are 66 years after the atomic bombings and make this request our own.”

An Atomic Bomb Survivors Relief Law that would provide state compensation to the survivors is Nihon Hidankyo’s dream. The current law was drafted in 1994 under the coalition government of the Liberal Democratic, Social Democratic and other parties. At an emergency meeting of the Nihon Hidankyo board, the law was criticized saying, “State compensation, which must be said to be the spirit of the law, has been removed … and the law requires nuclear war victims to ‘endure.’ Their pent-up anger can not be contained.”

But Nihon Hidankyo did not immediately initiate an effort to seek an amendment to the law because, after expending a tremendous effort to get the bill enacted, support organizations and the public seemed to feel that the movement had completed the major part of its work. Since 2001 the movement has focused on the filing of group applications and class-action lawsuits in an effort to bring about changes to the A-bomb disease certification system. During the time the issue of state compensation remained in the background, those who led the movement when the current law was enacted stepped down and a new generation of leaders took over.

Against this background, this year Nihon Hidankyo reoriented its movement. The thinking behind this was outlined in the preface to the organization’s request as follows: “If it is traced back to its source, the damage caused by the atomic bombings was the result of the war, which was an act of state. Thus it is natural for the government to provide compensation for this harm. But the greatest victims of all, those who died as a result of the atomic bombings, have been ignored and abandoned. Orphans, the families of those who died, and those who lost their jobs and assets are also victims of the atomic bombings.”

Hidankyo hopes to make the government acknowledge its responsibility for the tremendous damage that resulted from the atomic bombings and compel it to promise to issue an apology and provide compensation. This incorporates a philosophy that will, by extension, lead to the avoidance of the use of nuclear weapons and their abolition and thus to the ultimate wish of the survivors that there shall be no more atomic bomb survivors.

“The atomic bomb survivor movement is not about asking for an allowance because the survivors are suffering. It has consistently been based on the belief that we must eliminate nuclear weapons for the sake of humanity,” said Yoshie Kurihara, 64, a resident of Tokyo and former member of Hidankyo’s secretariat. Ms. Kurihara has been involved in the movement for about 40 years, conducting surveys on the lives of the atomic bomb survivors.

In response to these comments, Nihon Hidankyo held a board meeting in Tokyo on July 13 at which it addressed the withdrawal of plans to build new nuclear plants or to expand existing ones and the gradual shutdown and decommissioning of the nation’s 54 existing reactors. “The public is focused on the nuclear power issue. I would like to take advantage of this to broaden the atomic bomb survivor movement,” said Hideto Matsuura, 65, director general of the Atomic Bomb Sufferers’ Association in Ehime Prefecture, site of the Ikata Nuclear Power Plant.

But it is not clear how a denuclearization movement can be launched. In fact, at the Nihon Hidankyo board meeting, some members protested that the harm caused by atomic bombings and nuclear power are not the same.

Concern about lack of leaders

The biggest problem in trying to promote the movement is the aging of the survivors, who are able to describe the bombings based on their personal experiences. In 2006 the Chugoku Shimbun conducted a survey of the 48 organizations throughout Japan that are members of Nihon Hidankyo, including two based in Hiroshima Prefecture. At that time, most of the organizations said they expected to be active for only another 10 years, while only five organizations said a second generation would carry on their activities. Attempts to broaden the movement in various ways such as by co-hosting memorial services with citizens’ groups have begun, but at the same time there is growing concern about the lack of leaders.

Terumi Tanaka, 79, secretary general of Nihon Hidankyo, talked about what the atomic bomb survivors can do as more and more new harm from the atom occurs as a result of the accident in Fukushima. “We can convey what we know about the harm caused by radiation, things that the government is not telling people. We can tell people what we have achieved. I would like to make an effort to share this information with others.”

The atomic bomb survivor movement is based on the survivors’ profound physical and mental suffering and sadness and the wishes arising from them. The survivors will issue a broad appeal for the abolition of nuclear weapons, for state compensation for the damage caused by the atomic bombings and for denuclearization and will proceed when their appeal has been favorably received. They will appeal to survivors whose memories of the bombings are indistinct, to second- and third-generation survivors and to all others as well. Their message will be conveyed, heard and conveyed again. By repeating this process they hope that their movement will spread to as many people as possible. The time is approaching when we must stand by the atomic bomb survivors and take on the challenges they have tackled.


An interview with Masaharu Hamatani, professor emeritus, Hitotsubashi University
Interaction with young people must be the key
Masaharu Hamatani, professor emeritus in social research at Hitotsubashi University, has been involved in the atomic bomb survivor movement for many years. The Chugoku Shimbun asked him about the future prospects for the movement, including the request for an amendment to the Atomic Bomb Survivors Relief Law.

What do you think about the request to amend the current Atomic Bomb Survivors Relief Law?
After the law went into effect in 1995 there was a long period of time during which the atomic bomb survivor movement could not directly address the issue of state compensation. During that time the survivors grew older, and the leaders of the movement changed. It is highly significant that the movement was restructured this year to bring the issue of state compensation for the harm caused by the bombings to the forefront. Compensation will be an important issue for the new leaders of the movement.

The request for an amendment to the law has been debated over the years, but the survivors have pointed up the importance of addressing unresolved matters with a new way of thinking. A positive meaning will emerge by looking at it not as though the issue has been resolved because agreement has been reached but rather that key points have been worked out.

The central government’s policy that citizens must “endure” war damage is preventing the resolution of issues such as the payment of condolence money for those who died.
One of the characteristics of the atomic bomb survivor movement is that it has continued to pursue the issue of state compensation for wartime damage while also looking at the government’s responsibility for the war. In the same way, the movement by victims of air raids to seek compensation, which has been underway for more than 60 years, is now spreading throughout the nation. We must not underestimate the fact that a movement is just now emerging to seek compensation for damage resulting from the war and its indiscriminate killing.

Public support is essential in order to bring about the amendment of the law.
I would like those who did not experience the atomic bombing to take the wishes of the atomic bomb survivors seriously and consider what role they can play in making those wishes a reality. In particular, the peace movement of young people is broadly based. The atomic bomb survivor movement is the movement of the survivors themselves, but it is important that Nihon Hidankyo create plenty of opportunities to form ties with interested young people.