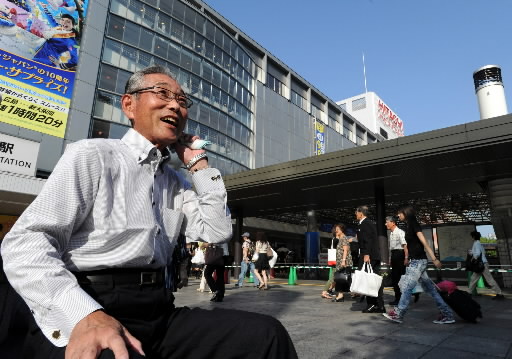 Identifying with the city that rose from the ashes
by Kanako Noda, Staff Writer

In the aftermath of the atomic bombing, it was said that nothing would grow in Hiroshima for 70 years. However, the city has risen from the ashes to become the largest city in the Chugoku and Shikoku regions. Hidemi Kato, 74, a former official of the Hiroshima City government, lost everything in the atomic bombing. The resident of Asaminami Ward, who clawed his way up from the depths of despair, identifies with the city's rebirth.

After his parents and his brother and sister died in the atomic bombing, he would spend several years living with other orphans in the area around Hiroshima train station. This area, once full of shacks, has become the main gateway to a city of 1.17 million people. Further development projects in the area are under way.

At the south gate of the station, redevelopment projects that had once stalled have now been resumed. At the north gate of the station, a new international hotel opened this past spring. Towering near it are newly-built condominiums. Mr. Kato eyed the station area, bustling with young people, families, and tourists, and smiled. “The area has changed so much,” he said.

About four years after the atomic bombing, he turned away from the station area. He enrolled in junior high school and started thinking more seriously about his future. Back with relatives now, their support enabled him to go on to Kanon High School in Nishi Ward.

But he didn't stay in high school long. He was an unruly teen and often fought with students of other schools, as if to smother the sorrow of losing his family. He also contracted tuberculosis and the cost of his treatment became a burden. Wanting to avoid causing any more trouble for his relatives, he decided to drop out of high school when he was in his second year. After that, he drifted from one job to another. To earn money, he even delivered packages containing dangerous drugs without really knowing what was inside.

In those days, the city was in the early stages of reconstruction. The former Hiroshima Municipal Baseball Stadium was completed in 1957, about the time Mr. Kato grew interested in the city's development. He landed a job as temporary employee of the city government, then, in 1960, passed the required examination and became a regular employee of the city.

“I devoted myself to my work as a city employee,” Mr. Kato said. He was mostly involved in construction-related projects. In 1989, he was appointed a senior official of the Hiroshima City Urban Development Bureau and took part in the redevelopment project of the Danbara district in Minami Ward. In 1992, he became head of the bureau, and, in this final post, he would manage the redevelopment of the area around Hiroshima train station. He felt a profound sense of destiny in the fact that he was addressing the needs of the area where he had roots.

The redevelopment work was complicated, though, by competing claims of land owners in the area, a situation borne from the chaos of the post-war period. As head of the bureau, Mr. Kato intervened, seeking agreements from land owners. When he visited one man who was opposed to the redevelopment, he found that the man had been exposed to the atomic bomb at today's Hiroshima Prefectural Hiroshima Technical High School. When the man learned that Mr. Kato's father was also at the school when the bombing occurred, he felt a close kinship with the father, though they had never met, and so he signed the document indicating his agreement. Mr. Kato had the feeling that his father had helped guide this outcome.

The redevelopment of the area opposite the south gate to the station was completed in 1999 with the opening of the new Fukuya Department Store. At the time Mr. Kato was head of the joint public-private venture which managed the store building. When he looked out the window of the president's room on the 12th floor, he shed tears as he noted the transformation of the once-ruined area around the station.

Sixty-six years have now passed since the atomic bombing and Mr. Kato is feeling his age. At this point, his strong desire is to share his story with young people. At a request from a friend, a professor at the Hiroshima University of Economics, Mr. Kato will give a talk to students there this fall. “I was raised by the city that had been devastated by the atomic bomb,” he said. “Before my life ends, I hope to give back all that I have received.”