66 years of memories: Art book as a memorial to victims 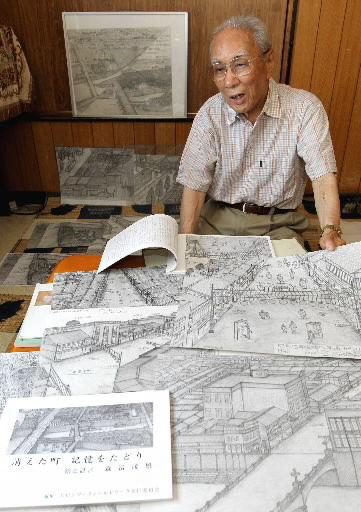 Part of Hiroshima that was completely destroyed by the atomic bombing has been recaptured in a collection of drawings titled “Kieta machi: kioku o tadori” (Vanished Neighborhood: Retracing Memories). The book is a collection of 43 pencil drawings by Shigeo Moritomi, 81, that faithfully reproduces scenes of the river delta of Hiroshima, sometimes called the “City of Water,” and everyday life there. Mr. Moritomi, who grew up in a neighborhood that became the hypocenter of the atomic bombing, lost five family members as a result of the bombing. The book, his tribute to those who lived in his old neighborhood, was put together by a citizens’ group whose aim is to pass on the experiences and memories of those who lived through the A-bombing.

“A lot of people were living in the area where the Peace Memorial Park is now, but all of those neighborhoods were destroyed by a single atomic bomb,” Mr. Moritomi said, explaining what motivated him to start drawing in his 60s. “The photographs from those days were destroyed by fire, and there are very few left. I thought if I drew pictures of the old neighborhood, young people could see what it used to look like.”

The house of Mr. Moritomi’s family was called “Tsunetomo.” It was located at 49 Saiku-machi, just east of the Motoyasu Bridge, which now leads to the Peace Memorial Park. His family ran a bedding shop there. The house his family moved to shortly before the atomic bombing was nearby at 19 Toriya-cho. Both of these addresses were in areas that are now part of Ote-machi.

On August 6, 1945, Mr. Moritomi, then a third-year student at Hiroshima Shipbuilding Industry School (now Hiroshima Commercial High School), was working as a mobilized student at a Mitsubishi plant in the western part of the city. After crawling out from under a roof that had fallen on him, he headed for home. He was able to reach the major downtown intersection in Kamiya-cho but was prevented from going further by the force of the flames.

He later interred ashes that had been found on the site of his home and that he tried to persuade himself were those of his 42-year-old father Shuichi; his two younger brothers; his grandmother, who had lived with them; and the niece of his mother, who had died of an illness. He and his elder brother, who had been discharged from the military, built a shack on the scorched earth and embarked on their postwar life. Mr. Moritomi was forced to drop out of college on account of poor health, but he took up selling textiles and later married and had children. After retiring he immersed himself in creating his pencil drawings.

“What I recall is the happy times of my childhood,” Mr. Moritomi said. He has continued to draw the Hiroshima of bygone days so that his family and friends will not be forgotten. “It is my way of consoling their souls,” he said.

His drawings include a picture of the Hondori shopping district, which was lined with “lily of the valley” streetlights. He and his friends played leapfrog there in the evening as well as the daytime. Another drawing features the Motoyasu River, where they sometimes swam until it was pitch dark out. The Hiroshima Prefectural Industrial Promotion Hall (now the Atomic Bomb Dome), where movies were occasionally shown, is the subject of another picture. Yet another depicts the army’s west parade ground (now the site of the old Hiroshima Municipal Stadium), where people did calisthenics in the summer and where fans cheered at the motorcycle races held there during the Shokon Festival in the fall.

Mr. Moritomi has drawn only two pictures of the aftermath of the bombing. He said the things he saw on August 6 were like “scenes from hell.” He still has no desire to draw pictures of what he saw that day.

Mr. Moritomi gave an account of his experiences of the bombing four years ago at the request of the Hiroshima Fieldwork Committee, whose members walk throughout the Peace Memorial Park. That prompted him to publish a book of drawings to accompany his story.

“I would like people to walk around carrying Mr. Moritomi’s intricate drawings,” said Mikio Nakagawa, 52, a high school teacher and president of the committee. “I’m sure they would be able to sense the presence of those who died.”