66 years of memories: Calling for peace while battling cancer 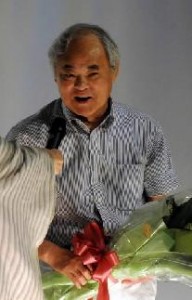 Keiji Nakazawa, an atomic bomb survivor and author of the “Barefoot Gen” manga series, appeared at a July 30 screening in Hiroshima of a documentary film in which he talks about his life. Last fall Mr. Nakazawa, a 72-year-old resident of Hiroshima, underwent surgery for lung cancer. A few days before the surgery, he learned that the cancer had metastasized. He vowed that like Gen, who lived through the atomic bombing, he would beat the cancer caused by the atomic bombing.

Mr. Nakazawa experienced the atomic bombing 1.2 kilometers from the hypocenter. His father, elder sister and younger brother were killed. His younger sister later died from malnutrition.

In the 80-minute film “Hadashi no Gen ga mita Hiroshima” (The Hiroshima That Barefoot Gen Saw) Mr. Nakazawa describes the devastation at the time of the bombing and the cruel bullying he was subjected to in the place where he went to live afterwards. In the film he says that his mother’s death after a long illness was what led him to address the issue of the atomic bombing. After the screening of the film, Mr. Nakazawa appeared on stage to briefly address the audience and stated emphatically, “The issue of the atomic bombing has yet to be resolved.”

Mr. Nakazawa gave up drawing in 2009 after his vision deteriorated as the result of cataracts. Through his manga he consistently denounced the atomic bomb and the folly of war. “For someone who can do nothing but draw, it was a fatal blow,” he said of his vision loss. Then the filming of the documentary gave him a new lease on life.

“Even if I can’t see, I can still talk about my feelings,” Mr. Nakazawa thought to himself. Despite his poor health he spent many hours on the filming. The project was the brainchild of Tomoko Watanabe, 57, executive director of a non-profit organization in Hiroshima. The film was produced by Siglo, Ltd. a Tokyo-based distributor.

Last September part of Mr. Nakazawa’s lung was removed because it was cancerous. In November he lapsed into a coma and was near death. “I believe my life was saved by last year’s surgery because there is more work for me to do,” he said. A few days before the surgery, he learned that the cancer had metastasized, but he entered a hospital near his home in Hiroshima and underwent treatment so he could go on living.

For the last few years Mr. Nakazawa has worked on the film version of “Kuroi ame ni utarete” (Pelted by Black Rain), the first short story he wrote about the atomic bombing, and on murals, which he can produce despite his vision loss. He said he would like the victims of the accident at the Fukushima No. 1 (Daiichi) nuclear power plant to read about Gen, who refused to give up in the face of adversity. Mr. Nakazawa is full of ideas.

On August 5 Mr. Nakazawa will throw out the first ball at the Hiroshima Carp game against the Yomiuri Giants at Mazda Stadium in Hiroshima. He was invited by the city to the August 6 peace memorial ceremony and will attend for the first time. “I felt the city had just covered up U.S. responsibility for dropping the atomic bomb and Japan’s responsibility for the war with the ceremony, at which doves are released,” he said. But as he got older he decided he might as well go to the ceremony once and see what it was all about.

Sixty-six years have passed since the atomic bombing of Hiroshima, and Mr. Nakazawa is once again pondering how he can convey his message through “Barefoot Gen” and his own story. “As a manga artist nothing could make me happier than for children to come to hate war and nuclear weapons,” he said.