66 years of memories: Artifacts that survived the A-bomb provide memories of pre-war past 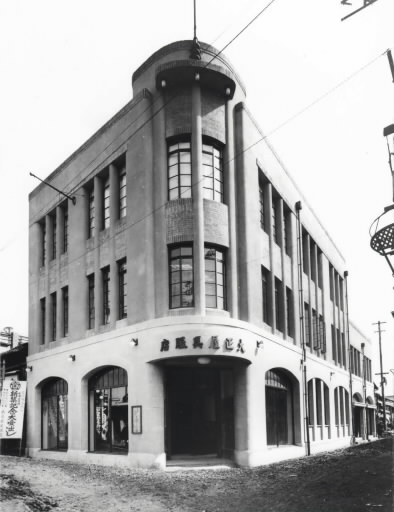 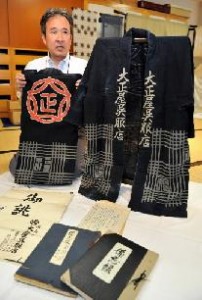 Today, the building that once housed the Taishoya Kimono Shop is used as the Rest House in Hiroshima Peace Memorial Park. The family of a former employee of the kimono shop still preserves Japanese “happi” coats and papers from the days the business was in operation. These items are valuable artifacts linking memories of the past with the present day. Before the war, the area where the Taishoya Kimono Shop was located was a bustling part of town, known for its lively atmosphere, but the atomic bomb completely annihilated that world.

The items include two happi coats that the employee once wore as well as a document describing the shop's regulations and a sheet of Japanese paper used to wrap kimono. They were kept by the late Kinjiro Wakasa. Mr. Wakasa served as the shop's head of sales and general affairs until 1943, when the Textile Control Ordinance was issued due to a shortage of materials for the war effort and the shop was forced to close. While the happi coats and the document with the shop's policies belonged to Mr. Wakasa, the paper for wrapping kimono was given to Mr. Wakasa by a customer of the kimono shop he opened after the war.

Each happi coat is about 85 centimeters long and is made of cotton dyed with indigo. At the collar are the words “Taishoya Kimono Shop” in white and at the back is the “Taisho” trademark designed in red. The document covering the shop's policies specifies the hierarchy of positions, their monthly salaries, travel expenses, and information on incentives and disciplinary measures, which all suggest that the shop was a flourishing business. Written on the paper used for wrapping kimono are both the name of the shop and the name of the employee who handled that transaction.

The former Nakajima Honmachi district, where the kimono shop was located, was once one of the busiest areas in the city of Hiroshima. Rows of buildings lined the streets, including movie theaters, coffee shops, and Japanese-style inns. Among them, the modern-looking structure housing the kimono shop drew particular attention from shoppers. Today, this area is now part of Hiroshima Peace Memorial Park.

Chieko Fujiki, 95, a resident of Asakita Ward, Hiroshima, often visited the kimono shop with her mother when she was a teenager. Ms. Fujiki still vividly recalls the lively atmosphere of the area back then. “When the shop had a big sale,” she said, “the employees were dressed in happi coats and kimono.” Ms. Fujiki's mother bought a formal kimono at the shop and Ms. Fujiki wore it at her wedding in January 1946, the year after the atomic bombing. The kimono was left by her mother, who died in the blast.

Mr. Wakasa faced difficulties in purchasing supplies during the war. He left notes after the war which described those circumstances. Toshiyasu Wakasa, 55, Mr. Wakasa's grandson, has carried on his grandfather's kimono business. Reflecting on the past, he said, “I didn't hear about the Taishoya Kimono Shop from my grandfather, but one of my customers of many years has told me about it. I feel proud of the happi coats and the papers, as they are a testimony to the past.”

Koji Ikemono, associate director of the Hiroshima Municipal Archives, remarked, “There are only a few items left among the things from the shops in the areas that were burned in the atomic bombing. The items from the Taishoya Kimono Shop, which was in an A-bombed building that still stands today, are especially valuable.”

Rest House in Peace Memorial Park
The modern-looking, reinforced-concrete building of three floors, including a basement, was built in 1929 to house the Taishoya Kimono Shop. The shop was located in the former Nakajima Honmachi district, one of the most bustling parts of the city at that time. After the shop closed in 1943, the Fuel Rationing Union bought the building and turned it into the Fuel Hall. Because of its solid construction, the building was able to withstand the atomic blast, though it stands only 170 meters from the hypocenter. After the war, the City of Hiroshima purchased the building and used it as an office for reconstruction efforts in the area. In 1982, the building was renovated and became the park's Rest House.