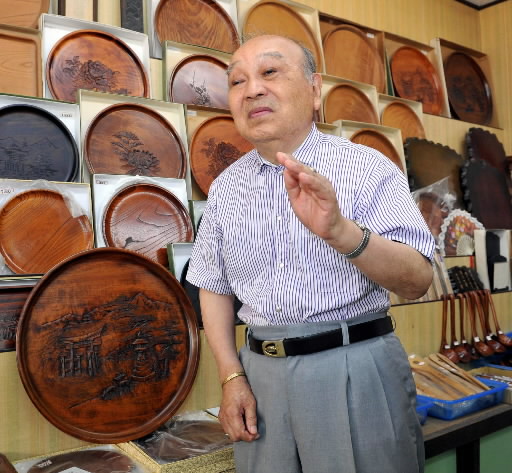 Elderly survivor to share his account for the first time on August 6
by Kanako Noda, Staff Writer

Masaru Tanaka, 80, runs a souvenir shop on the island of Miyajima, a World Heritage site located just west of Hiroshima. Sixty-six years ago, he lost much of his sight to the atomic bomb, and was forced to give up his dream of becoming a wood carver. Until the accident at the Fukushima No. 1 (Daiichi) nuclear power plant, he had kept his bitter experience hidden away. In the wake of the accident, he is now determined to speak out and share his account of the atomic bombing with others. On August 6, he will tell his story for the first time with the hope that these nuclear tragedies will not be repeated.

Mr. Tanaka was the first-born son of a couple who ran a souvenir shop on Miyajima. His grandfather and father sculpted wooden deer, a creature traditionally thought to be a divine messenger, and made wooden trays with the landmark “floating gate” to the Itsukushima Shinto Shrine carved on them. These craft products have been sold at the shop since its opening in the Meiji Era (1868-1912).

His grandfather was a master carver, winning first prize at the Taisho Expo held in Tokyo in 1914. His father was also a skilled craftsman and demonstrated his skills when Emperor Showa visited the island after the war. In his younger days, Mr. Tanaka loved trains and wanted to become a train operator, but he felt strongly that it was his duty to follow in the footsteps of his grandfather and father.

On that fateful day of August 6, 1945, Mr. Tanaka, then a first-year student at Koryo Junior High School, was mobilized to help dismantle buildings to create a fire lane in the event of air raids. Soon after he and other students had arrived for the day's task on the west side of Hijiyama Bridge in the heart of Hiroshima, there was a flash in the sky, he was slammed against a nearby mud wall, and he lost consciousness. When he came to, he found that his clothes were charred, and the left side of his body and his face were badly burned. His vision was blurry and he could barely see out of his right eye.

A truck happened to pass by, and he was taken to a Buddhist temple on the outskirts of Hiroshima. The main hall and the corridors of the temple were crammed with victims of the blast. Screams of pain and cries for family members echoed around him.

Before long his parents brought him back to Miyajima, but he became bedridden for the next six months. Though he was finally able to walk again, his face, arms, and legs were badly scarred by the burns he had suffered.

In those days, there was a recreation facility for British troops on the island. The soldiers felt sorry for him when they saw the keloids on Mr. Tanaka's face, and they gave him chocolates and cigarettes. Though he thanked them for these gifts, inside he was quaking with rage over the misfortune inflicted upon him by the A-bomb. Because of his embarrassment over his scars, he couldn't bring himself to wait on customers at the souvenir shop until he was in his late 20s.

Abandoning his dream of becoming a craftsman or pursuing higher education, Mr. Tanaka fell into despair. Then his father told him, “While many people lost their lives in the atomic bombing, you have been given the chance to live. You should be grateful to be alive.” Hearing these words, he was finally able to accept his fate. He got married in his 30s and went on to run the shop with his parents and his wife.

Mr. Tanaka was moved to tell his story as a result of the impact of the nuclear accident in Fukushima. “Only those with a similar experience can understand the harmful effects of radiation on human beings,” he said. He hopes to convey his experience to younger generations along with a gratitude for life, which he learned from his late father.

Masaru Tanaka will share his account of the atomic bombing at a gathering at the Hiroshima YMCA in downtown Hiroshima. The event will begin at 10:00 a.m. on August 6.