66 years of memories: Shrine was the pride of the lost district 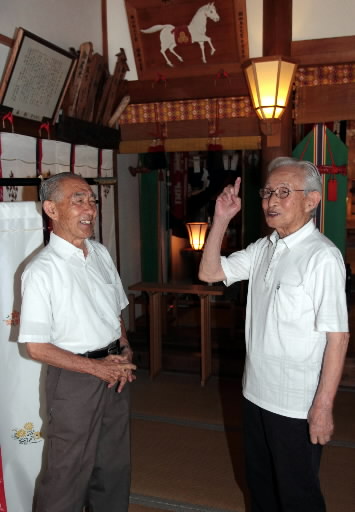 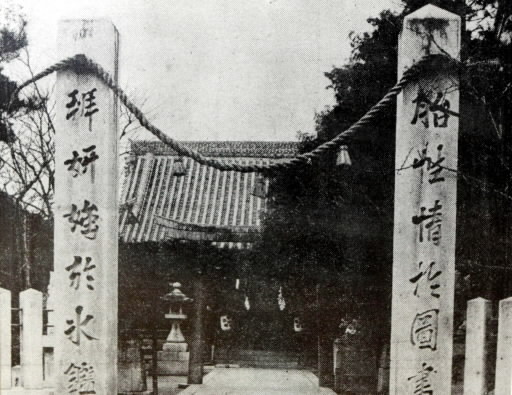 A Hiroshima district known as Tenjin-machi was completely destroyed by the atomic bombing of August 6, 1945. After the war, most of the Tenjin-machi area was transformed into Hiroshima Peace Memorial Park. The former district was named after the Tenmangu Shrine, nicknamed Tenjin-san, which was located in the area. An object of worship from the shrine, a symbol of the shrine's deity, managed to survive the blast and is now quietly enshrined at Sorasayainao Shrine. Former residents of the district who heard this news came to Sorasayainao Shrine to pray to the deity of Tenmangu Shrine for the first time in 66 years, appealing for the reconstruction of Tenmangu Shrine.

The object of worship is a wooden statue of Sugawara-no-Michizane, a legendary figure of academic excellence in old Japan. Tadashi Watanabe, 84, a resident of Naka Ward, and Kanji Yamasaki, 83, a resident of Fuchu Town in Hiroshima Prefecture, bowed deeply in prayer before the statue. In the serene setting, with only a chorus of whirring cicadas breaking the silence, Mr. Watanabe murmured, “What a marvelous twist of fate. I never thought I would pray to this deity again.” Mr. Yamasaki nodded his head in agreement.

Tenmangu Shrine, beloved by the community as Tenjin-san, stood about 600 meters from the hypocenter. The shrine structure was completely gutted by fire with only its sacred columns and guardian dogs, made of stone, withstanding the flames. The object of worship, however, survived the blast intact, as it had been evacuated from the grounds before the bombing. It is unknown where the statue was kept at that time. After the war, the shrine was not reconstructed and the statue came to be preserved at the house of the head priest, which was rebuilt near the shrine.

But then the priest and his wife passed away. Since 1988, Yoshiaki Uchida, 61, the head priest of Sorasayainao Shrine, has continued to provide a place of safekeeping.

Before the war, Tenjin-san was a source of pride for the people of the Tenjin-machi district. For the shrine's summer festival held every year in June, the road running from south to north through the area was lined for several hundred meters with street vendors. Recalling those days, Mr. Yamasaki said, “The lively atmosphere of the festival was much like the Tokasan Festival, a big festival that now marks the arrival of summer in Hiroshima.” Inspired by the deity of academic excellence, a calligraphy contest for elementary school students was also held every year.

The summer festival and the calligraphy contest, however, were suspended during the war and the atomic bombing erased all traces of the district and the pre-war lives of the residents. Mr. Watanabe lost all six members of his family, and Mr. Yamasaki lost a total of 11 family members and relatives, including his mother. After the bombing, both men were forced to endure on their own. In the post-war period, Peace Memorial Park and Peace Boulevard were constructed on the land once occupied by Tenjin-machi. In 1965, when the names of Hiroshima districts changed, “Tenjin-machi” disappeared from city maps.

Although the Tenmangu Shrine remains on the official registry of religious corporations as “Tenmanjinja Shrine” to this day, its surviving parishioners became scattered after the war. Reverend Uchida, who keeps the object of worship in his care, built a small temporary shrine in 1994 on the former Tenmangu Shrine grounds, south of Peace Boulevard, where the sacred columns and guardian dogs have lingered. Reverend Uchida has been looking into the possibility of reconstructing the old shrine.

The Tenmangu Shrine reportedly came to Hiroshima about 400 years ago, when Terumoto Mori built Hiroshima Castle. The shrine was transferred to the district from present-day Akitakata City in Hiroshima Prefecture, which had been the base for the Mori clan. Masayuki Miura, a professor at Hiroshima University and an expert in cultural assets, viewed a photo of the Shinto statue and said, “The statue is superbly carved and also shows some errors in the style of its costuming. Based on this, I believe that the statue was created in Kyoto in the 16th century when there was some confusion over the ancient court practices.”

Hearing this appraisal of the statue handed down from the period of the Mori clan, Mr. Watanabe said, “Because of the atomic bombing, all the people and things connecting me to my old neighborhood were lost. And the memories, too, are fading. I hope I can be of help in reconstructing the shrine by recounting the activities of the area and the lives of its residents at that time.”