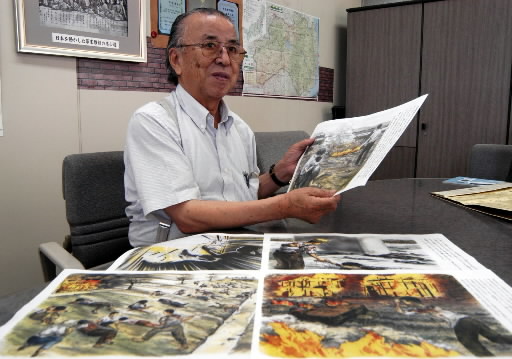 Grateful for the chance to live
by Michiko Tanaka, Staff Writer

On August 6, Kazumi Matsui, the mayor of Hiroshima, will read out the Peace Declaration at the Hiroshima Peace Memorial Ceremony. For the first time, essays that were solicited by the city from A-bomb survivors will be quoted in the statement. Rikuo Fukamachi, 79, who lives in the city of Nara, is one of the A-bomb survivors whose essay was selected. After learning about the public call for essays, Mr. Fukamachi sat down at his computer with a sense of mission, now that memories of the atomic bombing are fading. “The A-bombed city of Hiroshima must continue to speak out and tell its story,” he said to himself.

After moving to the Kansai region half a century ago to find work, Mr. Fukamachi developed a fluent Kansai dialect. Even today, he continues to share his account of the atomic bombing with the local community, using pictures he has made.

Mr. Fukamachi serves as the head of a light bulb manufacturer in Osaka. He said that he learned about the call for essays on the atomic bombing from an article in the newspaper. Once he sat down to write, he was flooded with memories. It only took about an hour to complete his four-page account.

The essay begins with his memories of August 5, the day before the bombing. He was 13 at the time, a second-year student at the Hiroshima Municipal Shipbuilding Engineering School (now, Hiroshima Municipal Commercial High School). He had been mobilized to work at a munitions factory, but that day the factory gave the students a rare day-off. Mr. Fukamachi was so happy that he and two classmates went to the river near his home in Higashi Ward to play in the water.

But on the following morning, August 6, the life he had known was instantly turned upside-down. Just as he was leaving his home for the factory, Mr. Fukamachi saw a blinding flash in the sky and he was blown into the air by the blast of the atomic bomb. His mother and three younger siblings managed to survive the bombing, too, but his father, who was a military officer attached to the former Hiroshima First Middle School (now, Kokutaiji High School), never made it home.

Starting the next day, August 7, Mr. Fukamachi searched for his father. He even studied the bodies that were floating on the river, one by one, but he was unable to find him. Then, around December of 1945, when his family moved to the town of Aio in Yamaguchi Prefecture (now, Yamaguchi City), Mr. Fukamachi's health began to deteriorate to the point where he became deathly ill. He had no appetite and his hair fell out. He was bedridden for a year and three months.

“I don't know why, but I was given the chance to live,” Mr. Fukamachi said. He has heard that both of the friends he went swimming with the day before the bombing are now dead. And two younger brothers suffered illnesses of the liver and other organs, dying at just 20 and 42. As a result, Mr. Fukamachi felt grateful for his life and worked hard to take advantage of the time he had. He found jobs in the design departments of a shipbuilding company and a chemical factory. At 52, he became the president of the company where he now works.

About 10 years ago, Mr. Fukamachi was asked to speak about his experience at a local elementary school. Since then, he has continued to share his A-bomb account. “I was given the chance to live so it's my duty to continue speaking out about the atomic bombing,” he said. He also made pictures using water colors to help the children imagine the conditions he describes and identify with his experience. These pictures include scenes of the moment he was exposed to the bomb's great flash, houses in flames, and scores of bodies floating on the river. The children listen raptly to his account.

“Even today a number of countries hold nuclear weapons that are targeted at the citizens of other nations,” he said. “I hope the A-bombed city of Hiroshima will continue to make the appeal that these weapons must be abolished.”

His wistful memories of the day before the atomic bombing will be quoted in the Peace Declaration. Mr. Fukamachi plans to travel to Hiroshima to attend the Peace Memorial Ceremony and hear the declaration read in person. He hopes, as well, that the sufferers of the Great Eastern Japan Earthquake will look to the reconstructed city of Hiroshima. “Anything is possible with enough determination,” he said. “With determination, you can survive, just as we have done.”