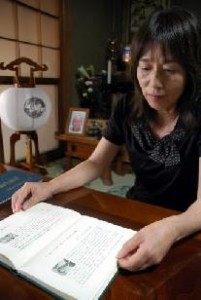 Handing down the horror of radiation
by Hiroshi Ebisu, Staff Writer

Since the nuclear crisis erupted at the Fukushima No. 1 (Daiichi) nuclear power plant in the wake of the Great Eastern Japan Earthquake, Mieko Yamamoto, 57, a housewife in the city of Bizen, Okayama Prefecture, has been thinking of her father every day. Kusuji Kusaka died last October at the age of 85. Mr. Kusaka, an A-bomb survivor, spoke about the horror of radiation until the very end of his life. “What would he have thought of the nuclear accident if he had been alive?” Ms. Yamamoto wonders. With the A-bomb account left by her father in hand, Ms. Yamamoto will attend the Hiroshima Peace Memorial Ceremony on August 6 for the first time.

Mr. Kusaka, who suffered from pancreatic cancer, was in and out of a Okayama City hospital since May of last year. By then, a doctor had given him “only six months to live.” From his bed, Mr. Kusaka said, “Radiation can affect our health decades later.” And he talked about the vegetables, among other things, that he ate in the aftermath of the atomic bombing.

When the atomic bomb exploded, he was working as a medic at the Hiroshima First Army Hospital in the center of town. He became trapped under the wreckage of the building and suffered severe injuries, but managed to escape death.

After the war, he returned to his parents’ house in Setouchi City in Okayama Prefecture and worked for a construction company and an agricultural cooperative. He had a wide variety of hobbies, including woodworking, fishing, painting, and composing humorous Japanese-style poems. Recalling her father, Ms. Yamamoto said, “He was grateful for the chance to go on living and he cherished the days he had.”

Ms. Yamamoto often heard her father talk about the atomic bombing. More than the stories, though, her memory was seared by an experience that took place when she was small. An only child, Ms. Yamamoto was still a little girl, sleeping between her father and her mother Chieko, now 80. That night, under a quilt, she found a pitted scar on her father's left arm. There were many scars like this on his body.

Her father told her: “When the bomb exploded, my body was pierced by a lot of glass fragments. There was no anesthetic to help when the pieces of glass were pulled out. It was so hard on my flesh and my veins.” Ms. Yamamoto then hated the atomic bomb, which had caused her father such suffering.

After her father's death, she sifted through his possessions and came across his A-bomb account. He wrote it in 1988, when his fellow medics were writing their own accounts of the bombing. Ms. Yamamoto knew that her father had recorded his experience, but she had never read it through carefully. When she read it again, she was able to picture her father at the time of the atomic bombing.

Mr. Kusaka was carried from the sea of fire on the back of an old friend, a soldier, then plunged his blood-soaked body into a river. Soon after going into the river, he was pelted by the black rain. In his account he also describes eating a pumpkin that had drifted to him in the river and then suffered chronic diarrhea.

Since the nuclear crisis, Ms. Yamamoto has often opened the booklet that contains her father’s A-bomb account. In her mind the nuclear accident that has threatened the people of eastern Japan with radiation exposure is an echo of her father's experience. “Dad, something terrible has happened,” she says to a photo of her father, when he was young, which accompanies his account.

About two months after the accident, Ms. Yamamoto’s second daughter, who lives with her, suddenly asked, “Where is Grandpa’s A-bomb account?” Ms. Yamamoto said that, due to the nuclear accident, her daughter has also grown eager to learn more about the atomic bombing. Seeing her daughter engrossed in her father's account, Ms. Yamamoto decided to represent her family and visit Hiroshima on the anniversary of the bombing.

“If I can feel even a fraction of my father's experience in Hiroshima...” Ms. Yamamoto said. On August 6, she will attend the Hiroshima Peace Memorial Ceremony, and then, along with her daughter, follow the footsteps her father took 66 years ago, his photo in hand.