66 years of memories: Remembering two “fathers” on the morning of August 6 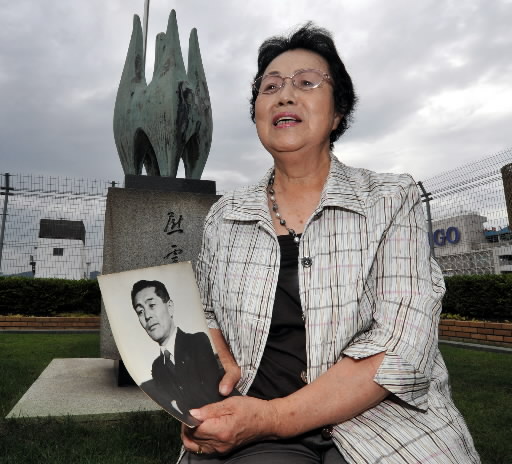 Expressing thanks for saving her life at second “father's” grave
by Kanako Noda, Staff Writer

Hisako Takahashi, 78, is visiting Hiroshima for the city's 66th commemoration of the atomic bombing. The resident of Shimotsuke, Tochigi Prefecture, will pay respect to two “fathers”: her own father, who perished in the bombing, and the father of an older student at her high school. That man carried the injured Ms. Takahashi on his back as they fled for safety from the roaring inferno of the city. On August 6, Ms. Takahashi will attend the Hiroshima Peace Memorial Ceremony as a representative of the victims' relatives and express her gratitude to the two men.

Ms. Takahashi’s father, Setsuzo Iwasa, was 51 years old at the time of the blast and he died at the headquarters of the then Geibi Bank (the present-day headquarters of Hiroshima Bank). On that morning, she left her house in the Ushita area (now part of Higashi Ward) with her father. She was a first-year student at the Second Hiroshima Prefectural Girls’ High School, and her father worked at the bank. She rode on the back of her father’s bicycle to a nearby bridge, where they parted. Her father smiled and waved and said, “Have a good day.” That was the last time she saw him.

“He was a loving father,” Ms. Takahashi recalled. “He often took us to Hondori shopping street or the former Hiroshima Prefectural Industrial Promotion Hall [now, the Atomic Bomb Dome].” On August 15, the day the war ended, her elder brother went to the ruins of the bank and brought back a handful of bones. Beside the bones was her father’s personal seal, which he always carried, providing the clue to identifying his remains.

As Ms. Takahashi heard that a monument exists for the employees of her father's bank who died in the atomic bombing, she paid a visit to the headquarters of the bank in downtown Hiroshima on August 5. One of the employees guided her to the monument, located on the roof of the building, where she put her hands together in prayer. Then she took out her father's photograph and said with a smile, “I finally made it here.”

Ms. Takahashi was exposed to the A-bomb while working outdoors with other students, weeding the East Drill Ground (in present-day Higashi Ward). Her arms and left leg were badly burned, and she felt so faint that she was unable to walk. She had heard that a man carried her on his back to her home, but she did not know who it was. The scars that lingered on her body kept the memory of the blast weighing on her mind and filled her with sadness over her father's death.

After the war, Ms. Takahashi got married in Hiroshima. She and her husband moved many times, though, because he was frequently transferred by his company. About 20 years ago, they moved to Tochigi Prefecture. There, she has been sharing her experience with elementary school and junior high school students, in the hope that no one else will face the same sorrow of losing an adored father.

About half a century after the bombing, she went to a reunion of the girls’ high school held in Hiroshima. At the reunion an woman who was an older schoolmate at the time told her that her father was the man who carried Ms. Takahashi on his back after the blast. She also mentioned that her father had kept Ms. Takahashi in her thoughts until the end of his life. This made Ms. Takahashi all the more grateful that she had been given the chance to live.

The man who saved her life died more than 20 years ago. With the conviction that she owes the life she has lived to her late father and the “father” that rescued her that day, she will take part in the Peace Memorial Ceremony on August 6 and visit the grave of her schoolmate's father.