An interview with Seigo Hirowatari, president of the Science Council of Japan 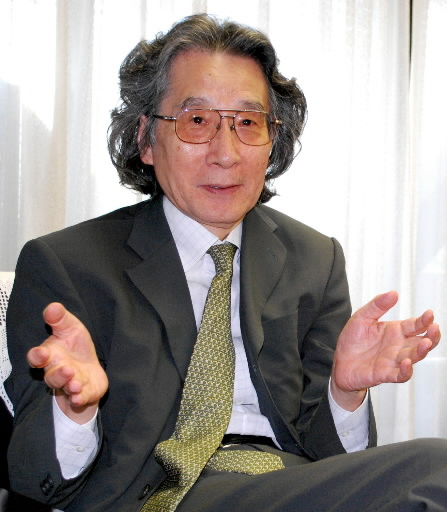 
Use wisdom to achieve breakthrough in national crisis
The role of the Science Council of Japan, which represents the nation’s 84,000 scientists, is to issue advice and policy recommendations to the government from its stance independent of the government. Since the Great East Japan Earthquake on March 11, the council has issued seven emergency recommendations addressing reconstruction and the response to the accident at the nuclear power plant. While conducting its energetic activities, the council has also been criticized for not offering specific recommendations or taking action that would better address the concern and demands of the public with regard to the problem of exposure to radiation and other issues. Amid this climate, on July 11 Seigo Hirowatari, a professor in the School of Law at Senshu University, was elected as the council’s new president, the first from a humanities or social sciences background. The Chugoku Shimbun asked the new president about his views and ambitions as a scientist with regard to achieving a breakthrough in the situation at the nuclear power plant.


Recommendations: Collect data, prepare map of entire country
On August 3 the Science Council of Japan recommended that a scientific survey be conducted to clarify the extent of the spread of radioactive materials resulting from the accident at the nuclear power plant in Fukushima.
Radiation doses have been monitored by central government ministries such as the Ministry of Education, Culture, Sports, Science and Technology and the Ministry of Agriculture, Forestry and Fisheries as well as at the prefectural and municipal levels. Electric power companies are also doing their own monitoring. The SCJ proposed consolidating all of this data and creating a map showing the diffusion of radioactive materials throughout the country. This is basic data needed to prevent health problems among the population. We further recommended establishing a permanent system for the comprehensive monitoring of radioactive materials over the long term based on this map and creating a database of survey results, which should be made available internationally.

Quite a few researchers have gone to the disaster area and are working there. Currently individuals and groups are conducting research separately. Can’t their research be consolidated and overall findings that will address the public’s anxiety and doubts be presented?
When the SCJ moves, it generally takes the form of advice or recommendations rather than action. Sending a research team to the disaster area would be difficult both financially and in terms of the human resources. The council set up a Great East Japan Earthquake Task Force and has created an emergency response system. We also formed subcommittees to address three issues: protection against radiation, a grand design for reconstruction and alternatives for energy policy, and we have submitted recommendations in these areas. We also have committees in 30 separate areas that are considering specific measures. I would like to consolidate their various research activities.

There is a need for specific recommendations on the present urgent issues such as identifying the areas that have been contaminated by radiation as well as decontamination.
This can be done if we can put together a unified recommendation after conducting various research activities. But there are cases for which it is better to make recommendations from a scientific point of view and other matters for which the government assumes responsibility and decides what to do. The current situation is truly a national crisis, and the SCJ would like to do anything it can. This is the first overall effort by the entire organization to address a single issue since the council was founded in 1949.


Information: Council must take the initiative
In a May 2 report to foreign academies the council confessed that it was unable to get sufficient information. Does this mean you did not receive information on the accident?
Ichiro Kanazawa, who was president at the time, asked the Nuclear Safety Commission of Japan to disclose information, but the commission said it did not have enough data to determine the situation at the nuclear plant, though I suppose the Nuclear and Industrial Safety Agency got the plant’s data from the Tokyo Electric Power Company. Amid those circumstances we managed to prepare a report for foreign scientific academies.

Was there any response from overseas?
We have received expressions of sympathy along with thanks for the report from the academies of 23 countries and international scientific organizations.

Although the accident at the nuclear power plant was unprecedented, the Science Council, Japan’s leading scientific community, had no information at all. What are we to make of this?
The government could say to us, “We have all this data. Based on this, what should we do now? We would like the council to consider this immediately.” We would get information along with such a request. Perhaps we should say to the government, “Let’s do this. Please give us information.”

The statement that Mr. Kanazawa issued on June 17 titled “For a Correct Understanding of Radiation Protection” was criticized by some researchers for various reasons such as being unscientific or simply rubber-stamping government policy.
I think criticism of the attitude of the International Commission on Radiological Protection was at the root of this. The ICRP’s attitude is that when considering protection against radiation in an emergency a decision should be made by looking at the big picture, considering the nature and degree of the risk as well as the social and economic situation. Right after the accident in Fukushima the ICRP issued advice with regard to Japan’s situation, and the SCJ immediately translated it and made it public. In light of this, Mr. Kanazawa’s statement was issued so that the public would understand that the protection measures taken by the Japanese government were based on the philosophy of the ICRP.


Challenges: Draw up a blueprint for conclusion
What role can scientists from Hiroshima and Nagasaki play?
Data on the victims of the bombings of Hiroshima and Nagasaki serves as the foundation when considering the protection of the human body from radiation. The extensive research that has been conducted on the victims’ ultimate sacrifice serves as an important base for proceeding with protecting the people of Fukushima from exposure to radiation.

Some people have suggested that Hiroshima and Nagasaki haven’t done enough research on exposure to low doses of radiation. Perhaps we should have a viewpoint that Hiroshima needs to learn from Fukushima.
In terms of scientific activities, perhaps that’s true. The exposure of people to radiation over a wide area has made the situation more critical.

The accident has not been brought to a conclusion, and tens of thousands of people have had to evacuate their homes and are not expected to be able to return. What should scientists do now? Please comment on that.
Various questions must be considered such as what processes are necessary for the decommissioning of the reactors and what problems must be overcome. Another is whether or not scientists will be able to review the schedule prepared by TEPCO and draw up a large blueprint from a scientific viewpoint. The government has said that those who evacuated will not be able to return for 10 years so the government will rent their property. When the government says things like that, at the same time they should also explain the overall prospects for the future such as how people will live and how they can find work.

If the government asks the SCJ to consider those matters, we will begin doing so to the utmost of our ability. Even when there is no such request, we sometimes make recommendations to the government as to what it should do. The council is a governmental organization and has been given the right by law to advise the government. We are now considering on a day-to-day basis what would be the best advice to give the government.


Council’s actions since March 11
On March 18, one week after the disaster, the SCJ issued a statement by its board and held an emergency meeting. The council stated that the accident at the nuclear power plant was serious and called for the construction of a framework that would allow the government, research institutes, the private sector and experts to function together in an integrated manner.

The first emergency recommendation was issued on March 25. A total of seven recommendations were issued through August 3. The second recommendation, which was issued on April 4, stressed the need for a survey of radiation doses. In it the council emphasized the need for a survey on radiation doses and called for the mobilization of a large number of people to take precise measurements over a wide area with the cooperation of universities and others in order to ensure that recovery activities could be carried out in the evacuation zone and that those who had evacuated would be able to return.