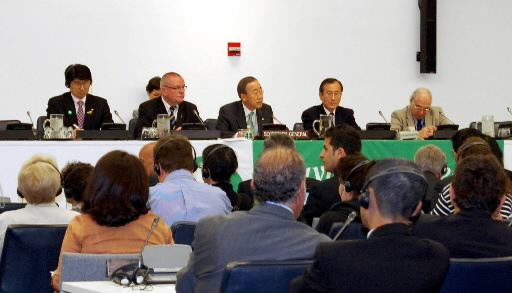 
Make use of strong presence to call for nuclear abolition
Membership in Mayors for Peace has reached the 5,000 mark approximately 30 years after the group’s founding in 1982. Sympathy for the group’s cause, working toward the abolition of nuclear weapons through the solidarity of cities, has grown. This report traces the history of the Mayors for Peace, whose current president is Hiroshima Mayor Kazumi Matsui, and examines the issues it faces.

The secretariat of Mayors for Peace is housed in the offices of the Hiroshima Peace Culture Foundation, an extra-governmental organization. Nearly every day membership applications are received from cities both in Japan and overseas via e-mail or fax.

“The cooperation of member cities, non-governmental organizations and citizens who have called on mayors of cities in their countries to join has played a big part in our growth,” said Nobuto Sugiura, division director of Mayors for Peace. He said that every time an application comes in from a city overseas that he has never heard of before, he senses the expansion of Hiroshima’s network.


More than 4,000 members with one push
The World Conference of Mayors for Peace through Intercity Solidarity, the forerunner of Mayors for Peace, was established in 1982 during the Cold War era. At the United Nations Special Session on Disarmament at U.N. headquarters in New York, the late Mayor Takeshi Araki emphasized the need for solidarity transcending national borders, sparking the group’s formation.

Throughout its history, the mayor of Hiroshima has served as president of Mayors for Peace. By the time of the administration of former Mayor Takashi Hiraoka, the organization’s second president, membership had reached 464 cities. After Mayor Tadatoshi Akiba took office in 1999, the organization grew rapidly, with more than 4,000 cities becoming members during his tenure.

During the 12 years of his three terms, Mayor Akiba took trips to 29 countries for 355 days and strongly urged cities to join the organization. Starting in 2008 he began calling on cities in Japan to join also. The fact that there were no membership fees or other financial burden made it easy for cities to join.

Mayor Akiba explained his aim at a press conference he held during his tenure, saying, “If the overwhelming majority of the members of an organization of cities supports the abolition of nuclear weapons, the governments of the U.N. member nations will work harder than ever toward abolition.”

Mayors for Peace has launched its “2020 Vision Campaign,” whose goal is the abolition of nuclear weapons by the year 2020, and international efforts to realize that goal are at the center of the organization’s activities. A total of three experts in lobbying international organizations and peace activists from Europe and the U.S. have been hired as full-time advisers to the HPCF. Mayors for Peace also has an international secretariat in the offices of the city hall of Ypres, Belgium, whose mayor is one of the group’s vice presidents.

According to Steven Leeper, chairperson of the HPCF, the combined population of the 5,000 member cities is more than 1 billion. “Greater numbers enhance the group’s influence in the international community,” he said.

In May 2010, Sunao Tsuboi, co-chair of the Japan Confederation of A- and H-Bomb Sufferers Organization (Nihon Hidankyo), traveled to the U.S. for the NPT review conference at U.N. headquarters in New York. “Mayors for Peace was one of the main NGOs active at the U.N.,” he said. “It was encouraging for the atomic bomb survivors.”

There is also little active participation in Mayors for Peace by the citizens of Hiroshima, which is a key member of the organization. Prof. Kazumi Mizumoto of the Hiroshima Peace Institute at Hiroshima City University said, “The group should focus not only on interacting with heads of local governments but also with their citizens,” he said. “The group’s base will expand if it broadens its perspective to include radiation victims around the world, in addition to those from the atomic bombings, as well as conflicts and wars.”

How can more than 5,000 member cities be brought together? And will this lead to more concrete actions? The ability of Mayor Matsui, who took over as president this spring, will be tested.

2020 Vision Campaign (immediate action for abolition of nuclear weapons)
The 2020 Vision Campaign is a proposal made by Mayors for Peace with the aim of abolishing nuclear weapons by the year 2020. It was mapped out at a meeting of the group’s executive board in October 2003. With an eye toward the review conference of the Nuclear Non-proliferation Treaty, in April 2008 the group announced its Hiroshima-Nagasaki Protocol, which spells out a process for making the vision a reality, including the implementation by 2015 of a treaty banning nuclear weapons. The group set its sights on adoption of the protocol at the NPT review conference in May 2010 but was unsuccessful in this effort. This is still one of the group’s goals.