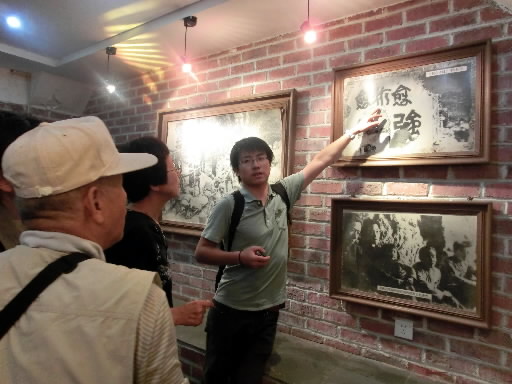 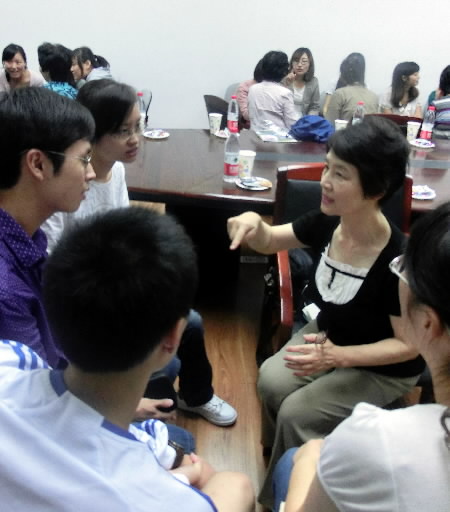 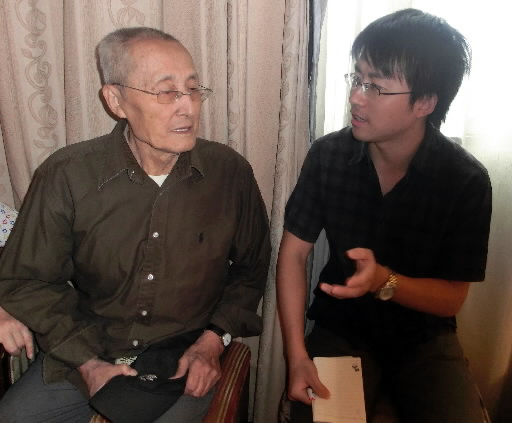 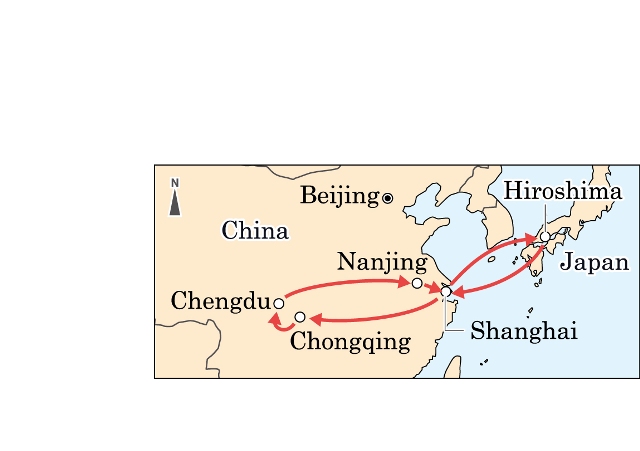 Thirteen members of the Hiroshima Peace Volunteers, who guide visitors through Hiroshima Peace Memorial Museum, took a six-day trip to China, departing on September 6. The group went to the cities of Chongqing and Nanjing, where they toured sites related to the Japanese Imperial Army’s invasion of China. The trip was planned by Yang Xiaoping, 30, a Chinese student residing in Higashi Hiroshima, who also served as guide for the group. Mr. Yang, who wants to serve as a bridge between China and Japan, is also a Peace Volunteer. Through dialogue that transcended the notions of aggressor and victim, the group learned the importance of building peace. This is a report on the travels of the group, who were accompanied by this reporter.


Chongqing
After a flight of about three hours from Shanghai, the group arrived in Chongqing, in China’s inland region, which supports the nation’s high rate of economic growth. The group became sweaty in the steamy, 36-degree C heat. Chongqing has a friendship city agreement with Hiroshima. It is also a city in which many citizens were killed in bombardments by the Imperial Japanese Army during the Sino-Japanese War.

“It may be like the feeling Americans have when they first come to Hiroshima,” said Kenichi Harada, 66, the leader of the group, with a mixture of anticipation and anxiety.

Relations between Japan and China continue to be strained because of their differing views of history, the Senkaku Islands issue and other concerns. Seven years ago the Japanese national team was loudly booed during a soccer game against China in Chongqing.

The Japanese Peace Volunteers, who regularly talk to visitors from around the world about the damage inflicted on Hiroshima by the atomic bombing, decided to visit China because they wanted to learn more about Japan’s history of aggression. Mr. Harada has had visitors from Europe and the U.S. complain to him that the Peace Museum only describes the devastation caused by the A-bombing.

The next day the group visited the site of an air-raid shelter in the center of Chongqing. At the time of the bombings, Chongqing was the provisional capital of China. The Imperial Japanese Army repeatedly carpet-bombed the city. Approximately 2,500 people who fled to the shelter during the bombing on June 5, 1941 are believed to have died of asphyxiation and other causes, and photos of the aftermath are on display there.

As the group toured the shelter, local citizens approached them curiously. Mr. Yang is a graduate student at Hiroshima University who is researching the war in Asia and museums devoted to peace. “Sites related to the bombings are not well known in Chongqing,” he said. “This is in part because friendly relations between Japan and China, both economically and diplomatically, are given priority.”


Chengdu
Stories of the war have been passed down among the citizens of Chengdu, which is about two hours from Chongqing by high-speed rail. After traveling to Chengdu, the provincial capital, the group met that evening with about 20 students at Sichuan University who are studying Japanese. They divided up into seven groups and exchanged views. Some of the students were avid fans of the Japanese pop group Arashi or of Japanese anime, and they chatted pleasantly the entire time. No topic of discussion was set, but Toshiko Shinagawa, 65, and four students spent the entire time talking about the war.

When Ms. Shinagawa broached the subject of their visit to Chongqing, a 22-year-old student from that city revealed that she had heard about the bombardment of Chongqing from her grandmother while growing up. She said that, fortunately, her grandmother was in a rural area of the city and was not injured.

Ms. Shinagawa’s grandmother was unable to get out of her house, which collapsed in the atomic bombing, and was burned alive. “We’re always describing the devastation of the atomic bombing, but Japan did terrible things to China during the war,” she said, apologizing. In reply, the student from Chongqing said, “The Chinese were victims just as the A-bomb victims were. We have the same feelings.”

After the discussions Ms. Shinagawa’s expression softened, and she said, “We were able to talk with each other not as Japanese and Chinese but as people. I was glad to hear their honest feelings.” The members of the group talked about Sadako Sasaki, who died of leukemia 10 years after the atomic bombing, and gave each student a small folded paper crane.


Nanjing
On September 9 the group went to the Memorial Hall of the Victims in the Nanjing Massacre by Japanese Invaders. Some people stared at the group icily as they toured the museum.

At the museum the group heard the account of Chen Gui Xiang, 86, whose grandmother was killed by a Japanese soldier and who was nearly raped herself. When asked by a Peace Volunteer if she hated Japan, Ms. Chen said, “At the time I was angry, but there were good people among the Japanese soldiers too. The past is the past. Friendly relations are what’s important now.”

At the hotel where the group stayed in Nanjing, they met with Wang Dawen, 86, an atomic bomb survivor who resides in the city. It proved to be a memorable encounter for Mr. Yang.

Mr. Wang who is hard of hearing, recounted in Chinese his recollections of the day of the atomic bombing 66 years ago. Mr. Yang served as interpreter for Mr. Wang, whose memories of that day were very clear. Mr. Wang left Manchukuo, the Japanese puppet state in northeastern China, to come to Hiroshima to study at Hiroshima Teachers College (now Hiroshima University). At the time of the bombing he was in a building on the college campus, 1.5 km from the hypocenter. He returned to China in 1952. He occasionally sprinkled Japanese words into his account of his experiences.

Mr. Wang said that another former Chinese foreign student he knew died several years ago and that among the former foreign students he is the only atomic bomb survivor living in China. He made no mention of any animosity toward Japan. After he finished recounting his experiences, he encouraged Mr. Yang, saying, “I’m glad you are working toward friendly relations between Japan and China. Work hard for world peace.”

Looking back on the trip, Mr. Yang said, “It was a good opportunity for Japanese and Chinese people to learn about each other. Meeting each other halfway and learning about our differences will also lead to peace. I think that for the Chinese people as well, talking with Japanese people who are earnestly seeking peace lightened their hearts.” He said he felt the response to the group’s visit was positive.

On September 12, the day after the group returned to Japan, Hiroko Usagawa, 66, an atomic bomb survivor, went to Peace Memorial Museum. As she prepared to guide visitors, her feelings were even stronger than before. “I want to tell people about how war dehumanizes people, the foolishness of war and the preciousness of life,” she said.

Next year will mark the 40th anniversary of the normalization of relations between Japan and China. According to a survey released by the Cabinet Office last December, only 20 percent of Japanese people have friendly feelings toward China. In order for Mr. Yang to become a bridge for friendly relations between the two countries, each person must take a clear-eyed look at history and there must be a succession of dialogues with China. Those efforts will certainly become the first step toward friendly relations between the neighboring countries and the establishment of peace in the region.