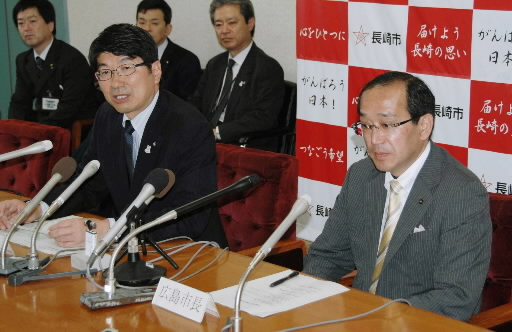 
How can member cities be encouraged to exercise initiative?
At a press conference on September 2, Hiroshima Mayor Kazumi Matsui, who serves as president of Mayors for Peace, said he intended to initiate debate with an eye to changing the current system under which Hiroshima and Nagasaki cover the organization’s operating costs. “Thus far we have promised member cities that we would not ask them to take on any financial burden, but at the executive board meeting in [Granollers,] Spain in November, I would like to discuss the situation regarding the organization’s operating costs,” he said.


No financial burden
One reason for the expansion of this network to more than 5,000 cities worldwide is that member cities are not asked to pay membership or other fees, which makes it easy for them to join.

On the other hand, this fiscal year the cities of Hiroshima and Nagasaki will share operating costs and other expenses for the organization amounting to approximately 12 million. This includes labor costs for the contract employees of the organization, whose secretariat is housed in the offices of the Hiroshima Peace Culture Foundation, and remuneration paid to an employee of the non-governmental organization in New York that is in charge of the group’s activities at the United Nations.

The City of Hiroshima has also budgeted 7.6 million for Mayor Matsui’s overseas travel related to Mayors for Peace this fiscal year. Through the HPCF, the city also spends a total of approximately 10 million per year on remuneration for three peace activists from Austria, the United States and Brazil who serve as advisers to the organization.

Donations from member cities overseas and grants from the European Parliament are allocated toward the operating costs for the secretariat for the 2020 Vision Campaign, which has its offices in the city hall of Ypres, Belgium. The budget for fiscal year 2009 was 106,000 euros (11 million Yen).

With regard to this financial situation, Nobuto Sugiura, a city employee and division director of Mayors for Peace, said, “This has been a problem for years, but prices and laws vary from country to country, so it’s difficult to set uniform membership or other fees.” He also expressed concern that some cities would object to any sort of financial burden and leave the organization as a result.

Tomoko Watanabe is executive director of ANT-Hiroshima, a non-profit organization based in Hiroshima that cooperates with Mayors for Peace. “When working to abolish nuclear weapons, a dynamic effort to spur the government involving ordinary citizens and non-governmental organizations is essential,” she said. “It’s necessary to run the organization without relying on Nagasaki and Hiroshima and to get support for activities expenses.”


Cooperation within regions
Mayor Matsui, who took office in April, is trying to find ways to spur member cities to take action on their own with regard to both the organization’s activities and its expenses. At an executive board meeting in November Matsui plans to discuss measures to strengthen cooperation among member cities in each region such as Europe, Asia and North America.

But it is essential that Japan take the initiative in bringing about the implementation of a treaty banning nuclear weapons, which is the stated goal of Mayors for Peace. There are limits to what cities can do to spur action on the part of the Japanese government, which relies on the nuclear umbrella of the U.S. and has stated that the concept of a treaty banning nuclear weapons is “premature.”

How can a membership of 5,000 cities be put to effective use on the international political stage? The ability of Mayors for Peace to convey the organization’s message to the world with the philosophy of Hiroshima and Nagasaki and the initiative of the group’s member cities is being called into question.

Mayors for Peace Member Cities
As of September 16, Mayors for Peace had 5,003 member cities in 151 countries and regions. By region, the greatest number of members is in Europe at 2,295 cities. There are 1,492 members in Asia, 482 in Central and South America, 327 in Africa, 282 in North America and 125 in Oceania. By country, Japan has the most member cities at 1,056 versus only 188 for the United States. Among the major global cities that are members are London, Moscow, Mexico City, Bangkok, Nairobi, Rio de Janeiro, Beijing and Chongqing.