Accounts of A-bomb survivors change in aftermath of Fukushima disaster 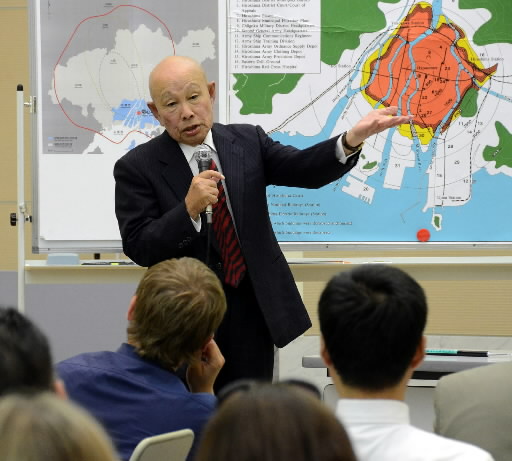 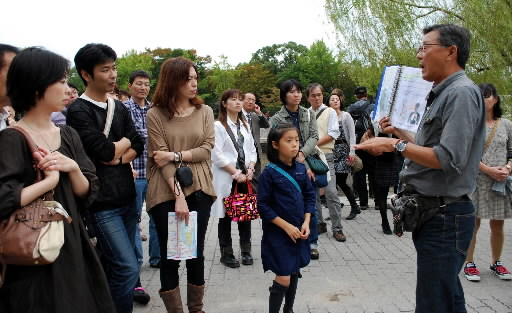 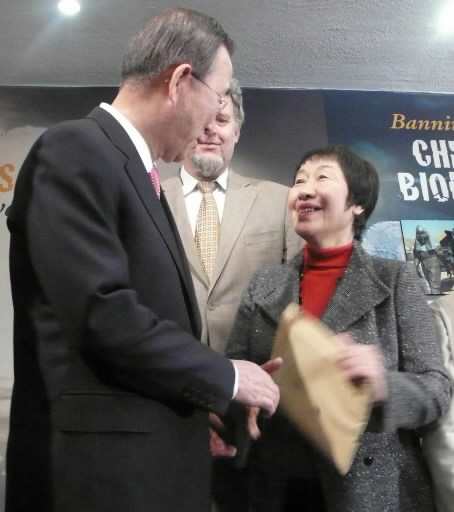 Shrouded in the veil of the “myth of safety,” nuclear power generation has attracted little opposition from the atomic bomb survivors of Hiroshima and Nagasaki over the years. But the March 11 accident at the Fukushima No. 1 (Daiichi) nuclear power plant operated by the Tokyo Electric Power Company, which threatens the health of many people and has inflicted tremendous damage on Japan’s economy, has greatly altered the awareness of the atomic bomb survivors. This is reflected not only in the stance of organizations like the Japan Confederation of A- and H-Bomb Sufferers Organization (Nihon Hidankyo), which has taken a clear position in favor of the abandonment of nuclear power, but can also be clearly seen in the accounts of the experiences of individual A-bomb survivors. The Chugoku Shimbun examined this issue through interviews with three survivors who have many opportunities to speak with foreigners.


Keijiro Matsushima: presentation to foreign diplomats
“Third atomic bombing”: Contamination a warning
One Saturday afternoon in late September, Keijiro Matsushima, 82, spoke to 25 young diplomats from 25 countries, including the United States and Iraq, who are participants in the United Nations Programme of Fellowships on Disarmament. Matsushima’s talk, which was given in English, was presented in a conference room in the basement of Hiroshima Peace Memorial Museum.

“Six months ago, when I heard the news of the accident at the nuclear power plant in Fukushima I was stunned. It seemed as though the Japanese people were experiencing the third atomic bombing, after Hiroshima and Nagasaki,” Mr. Matsushima said.

Before recounting his own A-bomb experience, in a matter-of-fact tone he talked about the accident at the nuclear power plant in Fukushima.

“How much did we learn from our experiences in the atomic bombings of Hiroshima and Nagasaki? We may have underestimated the horrors that nuclear energy could bring about,” he said. “The situation in Fukushima, which has been contaminated by radiation, will remain difficult for a long time, just as in Hiroshima and Nagasaki 66 years ago.”

Mr. Matsushima spent some time discussing the effects of the accident, including the fact that many people are still unable to return to their homes. He went on to say, “I believe that at times like this we have a duty to relearn the reality of the effects of the atomic bombings and the dangers of nuclear weapons and to make people aware of the importance of nuclear disarmament.”

Mr. Matsushima then shifted the discussion and, while displaying a map of the city, which was destroyed by fire after the atomic bombing, he talked about his own experiences for nearly 40 minutes. Mr. Matsushima, who was 16 years old at the time of the atomic bombing, somehow managed to survive after being trapped under a schoolhouse that had collapsed.

Ulrich Kuhn, 34, of the Foreign Ministry of Germany, took many notes during Mr. Matsushima’s presentation. “As one who is involved in arms control policy, it was valuable to me to learn about the tremendous destructive force of the A-bomb as a reality not just as an abstraction,” he said. “At the same time, this talk clearly showed that the risks posed by exposure to radiation are the same for both atomic bombs and nuclear power.”

Like many atomic bomb survivors, until the accident in Fukushima Mr. Matsushima had never referred to the pros and cons of nuclear power when recounting his experiences. But he spoke frankly about the situation noting that the power plant in Fukushima can not produce even 1 watt of electricity since being shut down. Yet the ongoing effort to bring it under control is costing a tremendous amount of money and is a dangerous job. It is also inflicting incalculable human suffering and property damage on the surrounding area. Matsushima said that if we look squarely at this reality we have no choice but to oppose nuclear power and pursue renewable forms of energy.

Amid the slow progress on nuclear disarmament, what will happen if there is an increase in the number of countries that rely heavily on nuclear power or developing countries that want to use it? “Must we contemplate a situation in the future in which the earth and humankind can become ‘nonrenewable’?” Mr. Matsushima continues to speak about his A-bomb experiences in the hope of avoiding that fate, but he is increasingly concerned about the future of humankind.


Kosei Mito: talks with visitors at A-bomb Dome
Shocked by question: Questions “anti-nuclear” movement
Since July 2006, Kosei Mito has stood beside the A-bomb Dome nearly every day, except in inclement weather, and talked to visitors from Japan and overseas about his atomic bombing experiences. Mr. Mito, 65, was exposed to radiation from the A-bomb while in the womb. On busy days he talks about his experiences throughout the day along with second-generation atomic bomb survivors and others, who now number five or six.

“Since the accident at the nuclear power plant in Fukushima there has been a big change in people’s interest in the atomic bombing of Hiroshima,” he said.

“I wondered how I could explain the destruction brought about by the atomic bombing of Hiroshima simply, accurately and in a way that would resonate with people in only about 30 minutes. I’ve tried different things such as showing people photos of the devastation, pictures of the aftermath drawn by survivors and newspaper articles that I kept in a file,” he said, recalling his activities. “But it would have been too abrupt to bring up the issue of nuclear power out of the blue.”

But things are different now. Many of the visitors to Peace Memorial Museum are not only interested in the damage that resulted from the thermal rays and blast of the atomic bombing 66 years ago. People are now trying to look at the atomic bombing in light of the accident in Fukushima and are also interested in what effect radiation had on the survivors and the issue of internal exposure to radiation, Mr. Mito said.

Mr. Mito, who was a high school English teacher, has many opportunities to talk about the atomic bombing with visitors from overseas. He recalled his shock when, about 10 days after the disaster in Fukushima, a woman from Great Britain said, “The Japanese people, especially the atomic bomb survivors, should know the dangers of radiation better than anyone else. So why are there more than 50 nuclear reactors in Japan? I can’t believe it.”

Perhaps from the perspective of foreigners the atomic bomb survivors were naturally presumed to be opposed to nuclear power. “But in fact that was not the case,” Mr. Mito said. “And I didn’t know enough about it to explain why that was.”

When he looked into the issue, he found that the American notion associated with the “peaceful use” of nuclear energy, the desire of some of Japan’s politicians to introduce nuclear power technology and the actions of some in the news media and others were behind this. “In the end, Japanese people came to think of nuclear power as the ‘good atom’ and nuclear weapons as the ‘bad atom,’” Mr. Mito said. “Our antinuclear movement didn’t include nuclear power.”

Mr. Mito tells visitors about the dangers of internal exposure to radiation, citing the examples of those who entered Hiroshima after the atomic bombing and those who were exposed to the “black rain.” He displays a map showing earthquake-prone areas around the world with the locations of nuclear power plants superimposed on it and points out how many areas like this there are throughout the Japanese archipelago compared to other countries.

“Failing to speak out about nuclear weapons or nuclear power means that you have accepted them,” Mr. Mito said. “We must make use of the things we have learned in Hiroshima from the atomic bombing and radiation.”

The “outdoor classes” conducted by Mr. Mito and others beside the A-bomb dome continue today.


Toshiko Tanaka: meeting with U.N. Secretary-General
Concern expressed about effects on children
On March 24, soon after the accident at the nuclear power plant in Fukushima, Toshiko Tanaka, 72, was at United Nations headquarters in New York with two atomic bomb survivors, including Lee Sil Gun, chair of the Council of Atom-bombed Koreans in Hiroshima. They were in New York to attend a ceremony for the completion of an artistic installation made from stacks of petitions calling for the abolition of nuclear weapons that were signed by more than 1 million people and submitted by Mayors for Peace. They were also there to meet with Ban Ki-moon, secretary-general of the U.N., to convey their request for the abolition of nuclear weapons.

During the meeting, via an interpreter Ms. Tanaka not only conveyed this sentiment but also gathered up her courage and said, “With the problem in Fukushima, Japan is now in a tough situation. We don’t want to see any more victims of radiation as the result of either nuclear weapons or nuclear power. Please call on the people of the world to shift to natural energy sources.”

Ms. Tanaka knew, however, that because of his position, Mr. Ban could not comment without giving the matter some thought. “But he repeatedly came back to shake my hand,” she said. “So I think he must have understood my feelings.”

Ms. Tanaka’s remarks to Mr. Ban were weighted with the feelings of an atomic bomb survivor who continues to suffer to this day. Ms. Tanaka, who was 6 years old at the time of the atomic bombing, was burned on her neck and right arm and nearly died. She has painful memories of her childhood during which her white blood count dropped and she was often ill. But these are not the reasons for her continued suffering.

Ms. Tanaka married at the age of 25. Three years later she gave birth to a son who suffered from funnel chest in which the ribs and sternum grow abnormally. Her sister’s child underwent surgery for thyroid cancer. She could not dispel her fear that the effects of the atomic bombing were appearing in the second generation.

She thought that perhaps her son’s condition was the result of exposure to radiation. She asked doctors about it, but they would not confirm any connection. And whenever she talked about the problem she encountered discrimination and prejudice. As a cloisonné mural artist, Ms. Tanaka creates works that incorporate her desire for peace. “Perhaps I’ve been able to suppress my trauma that way,” she said.

Large amounts of cesium and other radioactive materials were released from the nuclear power plant in Fukushima. Ms. Tanaka said she well understands the feelings of mothers who are concerned about the effects of exposure to radiation.

Ms. Tanaka first began recounting her atomic bomb experience in public in late 2008. That year she boarded the Peace Boat, which is operated by a Tokyo-based non-profit organization. During a port call in South America she spoke for the first time about her son’s condition as well as her emotional distress. She was encouraged by the words of a government official in Venezuela who told her, “Atomic bomb survivors have a responsibility to tell the people of the world about their experiences.”

Ms. Tanaka visited New York again in May of this year and talked about her A-bomb experience at places such as high schools and churches. She also engaged in lively discussions about the issue of nuclear power.

Ms. Tanaka is determined to fulfill her duty as an A-bomb survivor. “I believe it is our job to see that there will be no new victims of radiation in the next generation,” Ms. Tanaka said. “While continuing to create my artwork, I would like to talk about my A-bomb experiences and do whatever else I can.”