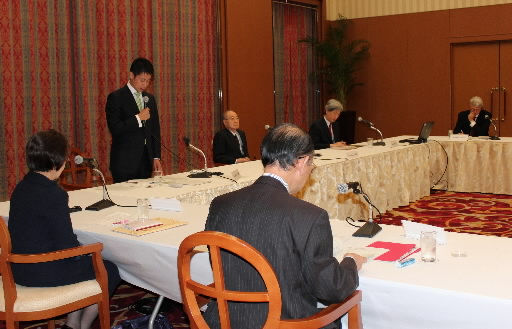 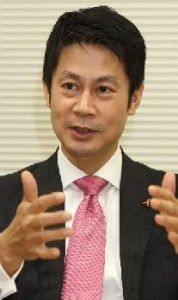 In an effort to set out the role it should play in nuclear abolition, Hiroshima Prefecture has put together a “Hiroshima for Global Peace” plan. Under the plan the prefecture aims to be actively involved in multilateral nuclear disarmament negotiations and the development of human resources for peace-building thereby boosting efforts to abolish nuclear weapons. This represents the first foray of the prefecture’s “peace policies” into nuclear issues, but high hurdles must be overcome to implement the plan, including the issue of how to gather personnel and funds from abroad in Hiroshima. This article examines the features of the plan and issues involved in its implementation.

During the formal announcement of the plan at prefectural offices on Nov. 4, Gov. Hidehiko Yuzaki appeared confident. “We have come up with a new approach by which Hiroshima can work toward peace over the next 50 or 60 years. Thus far Hiroshima has had an influence on the world through the atomic bombing survivors’ accounts of their experiences and in other ways. Through this plan Hiroshima will continue to exert its influence on the world but in a new form.”

Yasushi Akashi, former United Nations Undersecretary-General for Public Relations, Disarmament Affairs and Humanitarian Affairs, served as chairman of the plan’s formulation committee. William Perry, former U.S. Secretary of Defense, who in 2007 presented a proposal for achieving a “world without nuclear weapons,” was also on the committee. Other members included Yoriko Kawaguchi, former Minister of Foreign Affairs of Japan, and Gareth Evans, former Minister of Foreign Affairs of Australia. Ms. Kawaguchi and Mr. Evans are co-chairs of the International Commission on Nuclear Non-proliferation and Disarmament.

The action plan, the core of the overall plan, consists of five elements: 1) support the creation of a road map for nuclear abolition; 2) reduce the threat of nuclear terrorism; 3) develop human resources for the building of a peaceful international community; 4) amass research on nuclear disarmament, conflict resolution and peace-building; and 5) create a sustainable mechanism to support peace.

Specifically, one of the plan’s goals is the start of multilateral nuclear disarmament negotiations, and it proposes holding a “Hiroshima roundtable” in which senior government officials of nuclear-weapon states could participate as individuals. The plan would also create a mechanism for the evaluation and “grading” of disarmament efforts such as the implementation of the final report of the review conference of the Nuclear Non-proliferation Treaty. It also proposes the creation of a center for research and the training of experts to assume responsibility for the resolution of regional conflicts.


Emphasis on terrorism and conflict
These proposals for action can be said to be based on the international situation with regard to nuclear issues and Japan’s reliance over the years on the nuclear umbrella of the U.S. under the terms of the Japan-U.S. Security Treaty. The plan also emphasizes efforts to prevent nuclear terrorism, which has been an area of growing concern since the 2001 terrorist attacks on the U.S., as well as regional conflicts.

One feature of the plan is the creation of a mechanism to bring together people, research findings and funds from around the world. This notion involves creating a system to accept funds from foundations and wealthy individuals and to lure investments in peace to Hiroshima. This reflects Gov. Yuzaki’s belief that “it is difficult to sustain initiatives by relying on placing a financial burden on local governments.”

In order to promote the plan, Gov. Yuzaki left for the U.S. on Nov. 5. During his stay he will meet with Ban Ki-moon, secretary-general of the United Nations, and visit the offices of several organizations, including the Nuclear Threat Initiative, a private organization working to prevent nuclear proliferation. The governor is expected to seek their understanding and cooperation in the plan and ask for their advice with regard to funding and other matters.

Nobumasa Akiyama, an associate professor at Hitotsubashi University’s School of International and Public Policy, was one of the members of the task force for the formulation committee and one of the organizers of the governor’s trip to the U.S. “If our ideas are good, we can expect to receive funding,” he said. “On the other hand, there are skeptics who wonder what can be done at the local government level.”

Another feature of the plan is that it specifies a shift under the prefecture’s peace policies in its relationship with the City of Hiroshima from one of “separation” to one of “cooperation.”

The prefecture previously put together two plans in an effort to contribute to peace: the Hiroshima Global Peace Plan, which was formulated in 1996, and the Hiroshima Peace Contribution Plan in 2003. Both focused on the establishment of centers for the treatment of people who had been exposed to radiation and support for peace-building in conflict-torn regions. There was a strong tendency to emphasize a division of roles between the prefecture and the City of Hiroshima, which has taken the lead in calling for the abolition of nuclear weapons and in conveying the reality of the atomic bombing.

The new plan specifies that “the prefecture and the city shall make use of their strengths and unique characteristics and tackle difficult challenges as a unified community.” Hiroshima Mayor Kazumi Matsui has praised the plan as “significant” and expressed a feeling of anticipation about the cooperation between the two government bodies.


Communication an issue
The key to putting the plan into effect is even better communication between top officials in the prefecture and city. Kazumi Mizumoto, vice president of the Hiroshima Peace Institute at Hiroshima City University and a member of the task force for the plan, said, “The governor wants to take practical measures toward the abolition of nuclear weapons based on reality. Meanwhile Mayor Matsui will probably attach importance to the reactions of atomic bomb survivor organizations and peace activist groups. It is necessary to keep a close eye on the stances of each of them as politicians.”

Looking back, an employee of the prefecture’s International Affairs Division said they fumbled along in their efforts, which began in May, to formulate the plan to make Hiroshima a center for peace. Because prominent people from both Japan and abroad were appointed to the formulation committee, there was only one meeting – in October – at which they were all present. At that meeting the committee revised the task force’s draft plan, which had been prepared based primarily on e-mail communications with the committee members. From now on the committee will work out the details of the plan, including a mechanism for obtaining financial resources and for implementing the plan and a target date for implementation.

Unifying proposals and initiatives are essential in order for the plan to attract the attention of people around the world. The prerequisite for this is heightening Hiroshima’s momentum and making a sustained “all-Hiroshima” effort. The plan must be fleshed out from this standpoint, and a road map for its implementation must be presented.


An interview with Gov. Hidehiko Yuzaki: Significance and aims of plan
Development of sustainable mechanism
Goal to become focus for people and knowledge

The Chugoku Shimbun asked Gov. Hidehiko Yuzaki about the significance and aims of the “Hiroshima for Global Peace” plan that has been formulated by Hiroshima Prefecture. The following are excerpts from that interview.

During the [November 2009] campaign for governor you pledged to formulate this plan. Why is this plan necessary now?
We have entered an era in which we face new threats such as nuclear terrorism. At the same time, 66 years after the atomic bombing of Hiroshima, it is necessary to reconsider in what new ways Hiroshima should contribute to bringing about peace. The shift from the generation of the atomic bomb survivors to that of those who did not experience the atomic bombing is inevitable.

I gained some awareness of just what nuclear weapons are from my father [Minoru Yuzaki, former professor at Hiroshima University who conducted follow-up studies on the lives of the atomic bomb survivors]. But he was a scholar and somewhat of a doctrinal thinker. I’m a politician, so I would like to take a realistic approach.

What message do you most want to convey with this plan?
I would like to create a mechanism that will allow us to contribute to peace in an autonomous, ongoing fashion. There are limits on initiatives that are dependent solely on local government funding. And they change depending on the philosophy of the top officials at the time. It is not a question of what the government should do but what role Hiroshima as a region should play. I would like to take about 10 years to arrive at the final form outlined in the plan.

Do you have a blueprint for 10 years from now?
I want to set up a project that the people of the world can relate to then gather people, knowledge and other resources and put them to use to get things going. Hiroshima can draw more people. Hiroshima should become a focus for world peace and a place where people know that by coming here they can contribute to that effort.

You gathered prominent people to serve as members of the formulation committee.
That’s because even if they are saying the same thing, the fact that the plan was formulated by people who are listened to throughout the world is significant. From the start we didn’t have a system for the committee members to get together and hold discussions. All of them are busy, and we had a hard time gathering their opinions, but I think we have come up with proposals that will have a global impact.

How will you proceed with cooperation with the City of Hiroshima, which was specified in the plan?
It is important to have a division of roles to some extent. Mayor Matsui has espoused a shift from “peace going out to peace coming in” in order for Hiroshima to convey the reality of the atomic bombing to the world. That is one of Hiroshima’s primary roles. I would like the prefecture to go from there and assume responsibility for the parts of the plan to be expanded on.