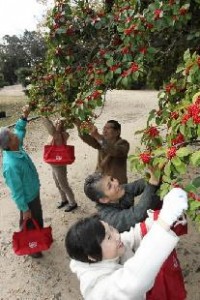 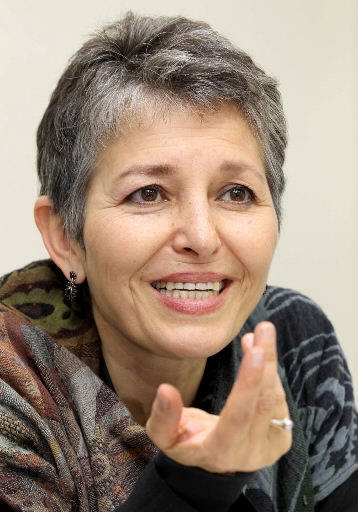 Seeds of A-bombed trees to be sent around the world
by Akira Tashiro, Executive Director of the Hiroshima Peace Media Center

An initiative to send seeds and seedlings from trees that survived the atomic bombing of Hiroshima has gotten underway. Green Legacy Hiroshima was the idea of Nassrine Azimi, 52, former director of the Hiroshima office of the United Nations Institute for Training and Research, who cares deeply about the trees. Her suggestion was taken up by UNITAR, a non-profit organization, a botanical garden, local citizens and others. This is the first time an organized international effort primarily targeting foreign countries has been undertaken. Through a network of people linked by the “life” from these “second-generation” seeds and seedlings from the A-bombed trees, the group hopes to help bring about a peaceful, environmentally friendly world without nuclear weapons.


UNITAR offers support
Desire for peace: Growing cooperation
One afternoon early this month Ms. Azimi and four other members of Green Legacy Hiroshima met on the grounds of Hiroshima Castle to collect seeds from the small red berries of an A-bombed kurogane holly tree. The site is approximately 900 meters from the hypocenter of the bombing. The tree has grown to about 10 meters in height and has a yellow plate attached to its thick trunk.

The plate explains that the tree was planted on the castle grounds in a garden in front of the building used as the headquarters of the Imperial Japanese Army after the Sino-Japanese War began in 1894 and survived the atomic bombing on August 6, 1945.

Chikara Horiguchi, 66, a tree surgeon, led the work, which involved rinsing the berries in water, carefully separating out the seeds and then putting them in plastic bags, taking into account the ideal conditions for storage. “The A-bombed trees are an irreplaceable asset of Hiroshima,” Mr. Horiguchi said. “I’d like to be of service in this meaningful effort.”

Even if it is decided where to send the seeds, they must first be inspected in Japan in line with the quarantine regulations of the destination country. Until that inspection is completed, the seeds will be stored in the seed storage facility at the Hiroshima Botanical Garden under temperature- and humidity-controlled conditions.

The seeds, which were collected from late fall through early winter, consist of 20,000 kurogane holly seeds, 1,200 ginkgo seeds, 500 camphor tree seeds, and 400 persimmon seeds. During this initial one-year trial period, seeds will be sent to six or seven locations with which Ms. Azimi and UNITAR have close ties. They are scheduled to be sent out by around the end of next April.


Repayment of kindness of 60 years ago
The establishment of Green Legacy Hiroshima goes back to July of this year. After gaining the support of UNITAR in January, Ms. Azimi consulted with her friend Tomoko Watanabe, 58, executive director of the Asian Network of Trust (ANT) Hiroshima. They decided to work together as partners, and they launched the organization by soliciting volunteers through the two organizations.

They recently prepared materials describing the project for people overseas. And with the cooperation of Mr. Horiguchi, translators and others, they selected 170 A-bombed trees in 55 locations within a radius of approximately 2 km from the hypocenter. They then created an English-language “Database of Hibaku Jumoku (Atomic-Bombed Trees) of Hiroshima,” which includes photos of each tree.

They were heartened by the support of the local botanical garden, which trades seeds with botanical gardens overseas every year. The Hiroshima Peace Culture Foundation, which has a global network of more than 5,000 cities in Mayors for Peace, is also involved in the project.

In 1951 Tatsuo Morito, the first president of Hiroshima University, sent a letter to universities in Europe, the U.S. and Asia asking them to send seeds and seedlings to the university. In his letter he conveyed his thoughts saying, “Green is the color of vividness, the color of hope, the color of peace.” Many universities responded to his request, and the seeds and seedlings that were received were planted on the burned-out grounds of the campus, making them green once again. Hiroshima University has also promised to cooperate in the Green Legacy Hiroshima project, saying it would provide an opportunity to repay the kindness it was shown 60 years ago. The university plans to contact the institutions that responded to its request then.


Positive response
Since mid-November inquiries have been sent out by e-mail and other methods soliciting participation in the project, and positive responses have already been received from universities and botanical gardens in Switzerland, Russia, South Africa, Chile and Singapore. Some of them are simply waiting for the quarantine inspection. “I was surprised at how much interest in the A-bombed trees there was among people overseas,” Ms. Watanabe said. “Growing trees from seeds takes a long time, but I hope that through that process the horrors of nuclear weapons, the importance of peace and the preciousness of life will be conveyed to many people.”

Alexander Mejia, 45, current director of the Hiroshima office of UNITAR, expressed enthusiasm for this new role of the organization in Hiroshima. “With the enthusiastic support of the people of Hiroshima and many others I would like to continue this initiative and plant A-bombed trees throughout the world,” he said.


Nassrine Azimi, former director of the UNITAR Hiroshima office and originator of the idea for the project
Convey regeneration and harmony
The Chugoku Shimbun spoke with Nassrine Azimi, who proposed the Green Legacy Hiroshima initiative, about her motivation and goals and her hopes for the initiative. The following are excerpts from that interview.

After stepping down from my post as director in mid-2009 I had more free time, and I became very interested in the A-bombed trees, which had been tended by Hiroshima City, a tree surgeon and citizen volunteers over the years.

The trees are living witnesses to the tragic history of the atomic bombing, and they have two messages that are important for Hiroshima: destruction and regeneration. While silently testifying to the inhumanity of nuclear weapons, they also tell us of the importance of resilience, tolerance and living in harmony with nature.

By sending the seeds and seedlings of the A-bombed trees overseas and having them grown there, I think we can spread the message of Hiroshima. More than 30,000 government officials and academics around the world have received training through UNITAR, and 2,000 of them received their training through the Hiroshima office. I thought the project would be doable if we made use of the network of those former trainees, who are active throughout the world. Many other people understood and shared my feelings, and that’s how we got where we are today.

The actual sending of the seeds and seedlings of the A-bombed trees is a simple matter, but the recipients have to be prepared to assume responsibility for nurturing the trees. By tending the trees, they will foster long-lasting ties with Hiroshima.

Initially, the initiative will focus on universities, botanical gardens and other public institutions that have knowledge and experience in growing plants. We’d also like to get city parks, schools and other public facilities involved. Once we get going we’ll be able to plant trees on former nuclear test sites in the United States and the former Soviet Union and near the sites of nuclear accidents, where so many radiation victims have been created. Seeds could also be planted on the site of conflicts between the Israelis and the Palestinians to symbolize a call for reconciliation.

I would like to provide information about our efforts throughout the world on the Green Legacy Hiroshima website as well as a way for us to interact through the site. If the A-bombed trees eventually grow, atomic bomb survivors and others could go there and meet with the local people.

We also plan to approach various embassies in Tokyo, including those of Iraq and Afghanistan, and send seedlings to them. I hope we can also work with the people who are already sending seeds and seedlings from an A-bombed Chinese parasol tree throughout Japan.


Nassrine Azimi
Born in Iran in 1959. Received a master’s degree in international relations from the Graduate Institute of International Studies in Geneva in 1986. Went to work for the headquarters of the United Nations Institute for Training and Research in 1986. After serving in various posts, including head of the New York office, was named first director of the newly established Hiroshima office in May 2003. Since stepping down in July 2009 has served as a senior adviser to the executive director of UNITAR. Resident of Hiroshima.


Jakob Kellenberger
President
International Committee of the Red Cross (Geneva, Switzerland)
It is with great interest that I have learned of the Green Legacy Hiroshima project, which revives our memories of an important historical event. If I understand correctly the initiative, I believe that indeed the International Committee of the Red Cross (ICRC) should associate itself with any effort, to commemorate one of the worst tragedies of the 20th century. Even more so that the initiative is a message of hope and renewal to future generations. Finally, I can only reiterate that the ICRC has historical and irrevocable ties to the City of Hiroshima, its tens of thousands of victims, its survivors, and their descendants (through Dr. Marcel Junod.)


Victor Kuzevanov
Director / Professor
Botanic Garden of Irkutsk State University (Irkutsk, Russia)
Thank you for good news about the seeds from unique plants survived after the atomic bombing in Hiroshima! We can plant them in the educational glasshouse for the public display and for educational and scientific purposes. It would be great to have any descriptive materials which we could translate into Russian and make a large informative poster about the story. We would like to have photos and texts of the bombing as well for the purpose of peace education. It could become very powerful message to everyone in Russia! We should publicize this remarkable event through newspapers and TV (local and central ones!!!) with the comments of Green Legacy Hiroshima upon seeds arrival! It would be great if the seeds could be delivered via the fast mail service with precautions (a warning text for the envelope with seeds "Scientific specimens! No freezing!")