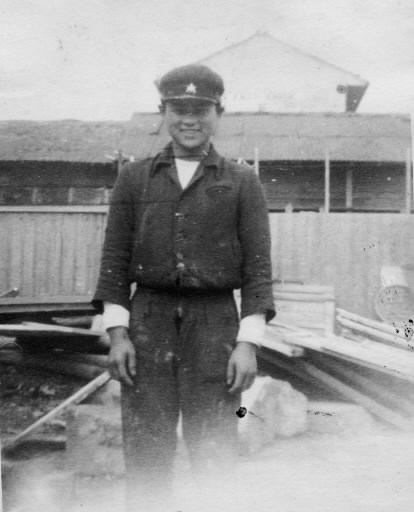 I wanted to go on to high school, but I couldn’t ask my mother to pay the tuition because I knew she was working her fingers to the bone from morning to night. So I thought I should find a job and earn money to help support the family.

It so happened that a job offer came to the students of my junior high from a sign maker called Nakamura Kosha. When I saw the job offer, I thought it would give me the chance to draw pictures and learn the fundamentals of drawing and about colors and lettering. These are all skills a manga artist needs, so I made up my mind right away.

When I began working there, I found that the apprentices were treated really harshly. Our boss would strike us if he was unhappy with our work. One of my coworkers, who joined the company when I did, got hit with a brush and paint was smeared on his head. I remember him crying behind a sign board. My work was precise, so I didn’t get hit. I guess I was cut out for the job.

Physical strength was vital in this line of work.

When we were painting a big sign, we had to cling on to it. Working about 20 meters off the ground was completely normal. My scariest experience involved painting an Apollo logo on a tank of Idemitsu Kosan, a petroleum company located in Yamaguchi Prefecture. In those days, there was no scaffolding so I had to paint the logo while hanging from the top of the tank. When the wind blew, all I could do was swing there in the air. I was risking my life. It was terrifying.

I was happiest when the work was done and I was back on the ground. I would look up at the sign, at ease again, and think, “Yes, I did it right.” I also painted the sign at the former Hiroshima Municipal Stadium. It was a good job for me, and I had a lot of fun. If I had gotten a job at an ironworks or something, I wouldn’t have gone on to make a career as a manga artist.

After work, I would go home and decide how many pages of manga I should draw that night and then I drew until midnight. I knew I should stop then, otherwise I wouldn’t be able to do my work the next day. But drawing manga was so much fun that I would end up drawing past midnight, anyway. I then hurried to bed, thinking, “Oh, no! It’s going to be a hard day tomorrow. I have to get some sleep.”

My mother was against my becoming a manga artist. She said that a manga artist didn’t make enough money to live on. My father was an artist and our family had always struggled, so she knew about an artist’s income all too well. But I was determined to fulfill my dream.