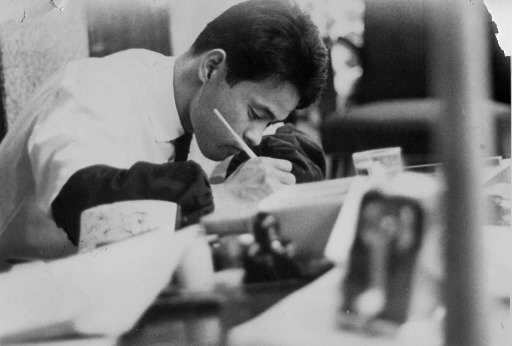 Off to Tokyo
by Rie Nii, Staff Writer


With mother’s blessing, pursues career as manga artist
After Keiji Nakazawa’s work won a prize, his mother grew more supportive of his dream of becoming a manga artist.

I continued creating manga stories while working for the sign maker. When I was 17 or 18, one of the stories I submitted to a magazine won a prize. It was a historical piece, meant for a single issue, titled “Jigokuken” (“Hell Sword”). I was really happy when I saw my byline “Keiji Nakazawa, Hiroshima” printed in the magazine and I received the 2,000 yen or so in payment. I think this persuaded my mother to give up her opposition, and she told me I could do whatever I wanted. She had finally accepted my dream.

During the New Year holidays that year, I brought one of my pieces to a publishing company in Tokyo. It was a cowboy story called “Hayauchi Sam” (“Quick-Draw Sam”). The publisher put out “Boken-o” (“Adventure King”), one of the top manga magazines at the time. I asked an editor of the magazine if there was some hope for me to become a cartoonist. He told me that I wouldn’t improve if I continued down that same path. He suggested I become an assistant to a manga artist and he introduced me to one. I had to leave Hiroshima and move to Tokyo, a step that determined my future.

When I quit my job at the sign maker, I was given 30,000 yen as a bonus to get settled in my new job. I treasured that money, though, because I thought if I used it and had nothing left, I would end up having to flee Tokyo.

In Tokyo, Mr. Nakazawa worked day and night, serving as an assistant while creating his own manga.

As an assistant, I was paid 1,000 yen a day, even when I worked through the night. As the manga artist was writing for a monthly magazine, I worked as an assistant for 15 days a month and I took the other 15 days off right in a row. I bought a small desk and a drawing board and, during my time off, I would draw from early morning until late at night in my tiny, one-room apartment.

In the summer, the apartment was sweltering hot. To avoid spoiling the paper with my dripping sweat, I went to a nearby coffee shop, ordered one coffee, and stayed there all day. The woman who owned the shop never complained and let me sit there as long as I liked.

I lived in the Yanaka area in Koto Ward, Tokyo, a traditional district where people were good-natured and warmhearted. It was near Tokyo University of the Arts, so there were a lot of artists in that part of town. People were open to the arts. I owe a lot to the area and its people.

Less than two and a half years after Mr. Nakazawa moved to Tokyo, he made his debut as a manga artist in June 1963.

In those days, all would-be cartoonists brought their work directly to the editorial departments of the publishing companies. Things went very smoothly and my debut work, “Spark 1,” was carried in a magazine called “Shonen Gaho” (“Boys Pictorial”). It was about racing cars and industrial espionage. I was overjoyed, but the series was brought to an end a year later. I guess my ability was still lacking.