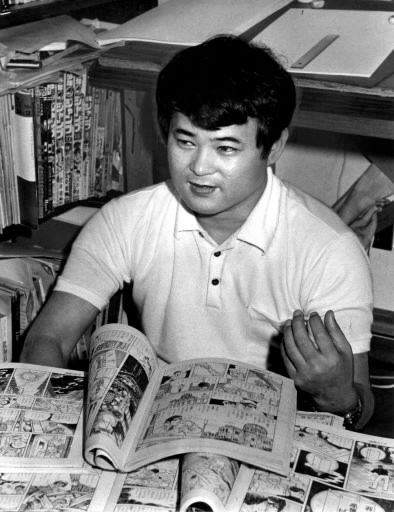 As soon as the story was published, the editorial department got a phone call. Another manga artist was calling to compliment me. I was really happy.

My editor was very kind. He encouraged me to draw more manga about the atomic bombing. So, in quick succession, I created the “Black” series, which included “Kuroi Kawa no Nagare ni” (“The Black River Flows”), “Kuroi Chinmoku no Hate ni” (“After the Black Silence”) and “Kuroi Hato no Mure ni” (“The Flock of Black Pigeons”).

But when I was drawing scenes of the bombing, the stench of rotting bodies returned to me. It was depressing.

I became a manga artist because I wanted to create manga for children. That’s why I wanted to have my work appear in a children’s magazine. In “Weekly Shonen Jump,” I published stories that had nothing to do with the atomic bombing. I didn’t care for manga that depicted high-spirited young men who made tireless efforts to achieve their victories, like “Kyojin no Hoshi”(“Star of the Giants”) and “Ashita no Joe” (“Rocky Joe”). I said to my editor, “I want to create a story where the main character is feckless, a guy who’s slow, goofy, and weepy.” He told me to give it a try. That’s how “Moero Guzuroku” (“Go with Passion, Guzuroku”) was born. I created several stories in the “Guzuroku” series, which led to the “Guzu boom.” In this series I wanted to say that if you try hard, you can surely achieve great things.

In April 1970, Mr. Nakazawa released an A-bomb manga entitled “Aruhi Totsuzen ni” (“One Day, Out of the Blue”) in “Weekly Shonen Jump.”

My anger over the atomic bombing flared again as a result of the Vietnam War and the renewal of the Japan-U.S. Security Treaty in 1970. I was also worried that my eldest daughter might suffer from the effects of the bombing due to my A-bomb experience. I showed my editor a draft of “Aruhi Totsuzen ni,” whose main character was a second-generation A-bomb survivor and a second-year student in junior high school. I imbued the piece with my feelings as a parent. My editor told me to create an 80-page story, with 20 additional pages. He said that he had never been moved so deeply by a draft.

When the story was published, there was a powerful reaction. One elementary school teacher in Niigata Prefecture sent me a letter. The teacher had scolded a student who brought a copy of “Weekly Shonen Jump” to school. The student said that some manga were worthwhile, and showed the teacher my story “Aruhi Totsuzen ni.” In the letter, the teacher praised my work and expressed the desire to use the story in class.

In October 1972, Mr. Nakazawa drew manga about his own life in contributing to a project for the magazine “Monthly Shonen Jump.”

The editor at “Weekly Shonen Jump,” who had seen this piece, asked me to make a long serial based on the story of my own life. He said that he would give me as many pages and as much time as I wanted for it. This was the start of “Hadashi no Gen” (“Barefoot Gen”).