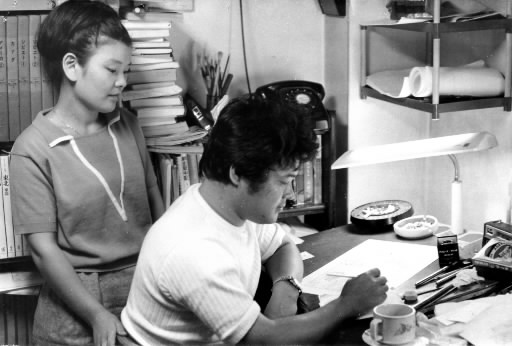 The Birth of Gen
by Rie Nii, Staff Writer


Determined to depict the reality he experienced
The “Barefoot Gen” series began in June 1973.

Gen Nakaoka is my alter ego. The name “Gen” comes from “genki” (vitality) and “genso” (a chemical element). I wanted him to be the basic element of all human beings. I was in the first grade at the time of the bombing, but I thought Gen should be a bit older, so I made him a second-grader.

I also decided to depict the dark times of Japan’s regime of terror before the war, when free speech and activity were ruthlessly suppressed. This was something I couldn’t draw previously because of the limited number of pages.

When I started the series, I was able to overcome a feeling of reluctance toward dealing with the atomic bomb. Or I should say I made up my mind to do the job thoroughly. And because I expected disturbances and protests from that point on, before I began I told my wife, “Be careful about who you let into the house. There will be telephone calls and letters, too, but just ignore them. I’m drawing the truth.”

However, no one voiced disapproval. I was surprised. The overwhelming majority of the letters that arrived said: “I didn’t know that was the truth. Tell us more.”

Some letters, though, said the story was too cruel, or sickening, so I had to tone it down. I didn’t want to, but if people wouldn’t read it, there was no point in drawing it. So I softened the depictions quite a lot.

“Untaught, a boy near a temple will chant a sutra.” Like this saying, I suppose my wife wanted to help after seeing me work painstakingly through the night, day after day. At first, she erased my pencil guidelines with an eraser, and made corrections with correction fluid. Then I had her trace the guidelines with a pen, and she was good at it. I thought she would make a good assistant. She learned quickly, and after six months or so, she was doing just fine.

I had other assistants, but merely having the right number of assistants didn’t help. They didn’t have the aptitude for it, so I had to let them go. My wife was much better. And it was easier working with a family member as I didn’t have to be so careful about what I said to her. I guess she enjoyed the work. She did a good job while raising our children. She turned out to be a precious assistant.