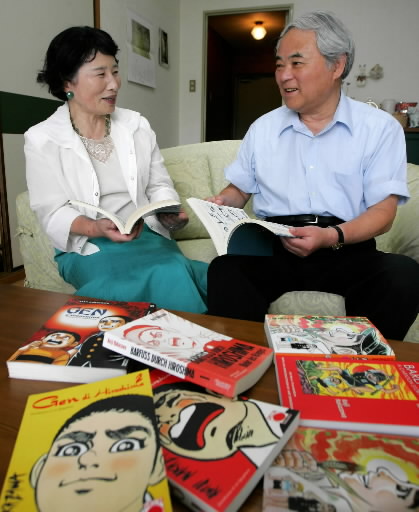 Gen makes his way into the world
by Rie Nii, Staff Writer


Gen makes appeals in translated books, movies, theater
The first volume of the English version of “Barefoot Gen” was completed in 1978.

I think “Barefoot Gen” has been translated into more than 20 languages, which means Gen is now running barefoot around the world. So far it has been published in 14 languages, and the entire series appears in English, Russian, and Thai.

The translators have been international students and volunteers. For the German version, a Japanese woman who works at the Japan branch of a German radio station was ambitious enough to make the German translation. The German director of the branch read her translated version. I heard that, at first, her boss was lying on a bed, and then was sitting up and sobbing. I heard, too, that it was the first time that person had cried so bitterly while reading a manga. It made me feel that manga has power.

Manga is now part of the world culture. I hope “Barefoot Gen” will appear in more languages in the future.

Before the live-action movie was produced, I made one request. I wanted Rentaro Mikuni to play the role of Gen’s father. They look alike. Other than that, I didn’t get involved. But the movie was a flop. It didn’t have the appeal unique to live-action films and it could have been a better movie. It fell short of my expectations so I thought I should turn to making an animated film.

For the animated film, I wrote the scenario in one week, showed it to people, got a green light, and the work started. It’s a good film.

Besides movies, “Barefoot Gen” has been made into different forms of performances inside and outside Japan, including plays, musicals, and operas.

I hope Gen will run freely in the world, wherever he can. If he can go here and there, conveying the Gen spirit, that will have been the best part of being his creator.

Of course, I have some issues with Gen’s movies or other versions of the story. I feel, “This should be made deeper,” or “This is the most important part, but it lacks focus.” I sometimes get irritated, but I’ve come to believe that it’s good that Gen has left home and continues to live in these performances. Gen can play his role if a lot of people see a performance and it makes them feel something.

“Barefoot Gen” is also being used in a new peace education program promoted by the Hiroshima Municipal Board of Education.

Manga can be a good resource when it’s used in the right way. It seems they’ve finally realized that.