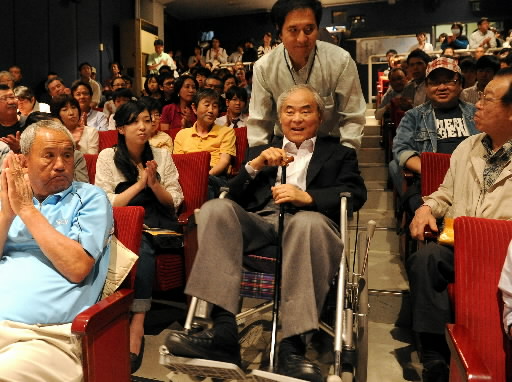 
Handing down anger against the A-bombing through Gen
In September 2009, Keiji Nakazawa announced that he would retire from creating manga.

I have retinopathy in my left eye and a cataract in my right eye. I had retinopathy surgery and used every trick to coax myself into drawing, but I couldn’t do it any more. My right arm has a nervous disorder and I can’t hold a pen. I still have a lot of ideas for manga stories, but I’ve lost the things that are needed for a manga artist. I’ve had to give it up.

At the end of that year, I was diagnosed with lung cancer. I was shocked. It hit me: “I ended up getting cancer.” A lot of A-bomb survivors get cancer, right? Since I was young, I had always been afraid that I might get cancer someday. I underwent surgery in September 2010, but I don’t know how much longer I’ll be able to live. I’ve had two rounds of chemotherapy and radiation treatment almost 30 times.

Mr. Nakazawa decided to spend the rest of his days in Hiroshima.

Before my operation here, I decided to move from Saitama to Hiroshima. When it comes down to it, I want to die in my hometown. I have a lot of friends here.

When I would watch the river flow from the Honkawa Bridge or the Motoyasu Bridge, the image of bodies drifting and sinking in the water used to haunt me. I couldn’t help feeling gloomy when I was walking around the city. But then the film version of my manga “Okonomi Hacchan” (“Hacchan the Chef”) was shot here more than ten years ago and I became attached to Hiroshima once again. Now I see Hiroshima as something like a young plant that’s budding.

Giving talks will be the main focus of Mr. Nakazawa’s activity.

I can still speak, so I will definitely keep conveying the idea that Gen is angry. I believe that the Japanese people still need to examine their responsibility for the war and the issue of the atomic bombings. I’m now free to go anywhere in the city at any time. I’ll make every effort to talk to people, if I’m asked.

I’m a manga artist, so I expressed the reality of the atomic bombing through manga. I’ll be pleased if the next generation takes up the A-bomb experience through “Barefoot Gen.”

(This article concludes the series about Keiji Nakazawa, written by Rie Nii of the Hiroshima Peace Media Center.)