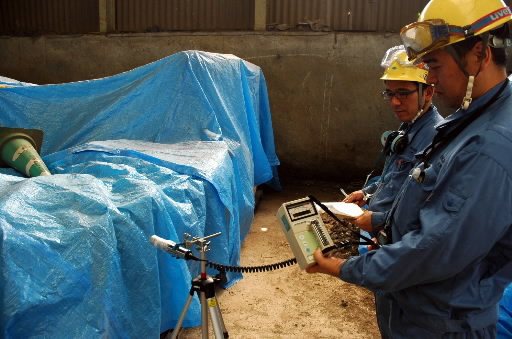 
Hiroshima demonstrates little presence
The restart of the Oi nuclear power plant, run by the Kansai Electric Power Company in Fukui Prefecture, has amplified the debate over the pros and cons of this “peaceful use” of nuclear energy. The city of Hiroshima, which suffered the atomic bombing 67 years ago this summer and has long appealed for the abolition of nuclear weapons, has been shaken, too. The Chugoku Shimbun explores the future course for the A-bombed city, whose appeal has evolved since disaster struck at the Fukushima No. 1 (Daiichi) nuclear power plant.

Sacks of ash, shrouded in blue sheets, are being stored along a coastal area in the city of Kitakyushu, Fukuoka Prefecture. The ash, which Kitakyushu incinerated in May on a trial basis, was produced from debris left by the Great East Japan Earthquake and the massive tsunami. To confirm the safety of the ash, city officials continue to measure radiation levels in the vicinity every day.

Kitakyushu is the only city in the western part of Japan that has declared a willingness to take in debris from the earthquake. As early as August, with 40,000 tons a year as the designated limit, the debris from eastern Japan will be transported to Kitakyushu from the city of Ishinomaki in Miyagi Prefecture.

Since the time Kitakyushu began debating the idea of accepting debris in March, government officials have received about 5,700 telephone calls from local residents (as of July 13, 2012). Among these voices, 90 percent are strongly opposed to the plan. Kitakyushu Mayor Kenji Kitahashi, 59, stressed, “I understand people’s fear of radioactive materials, but it’s also true that some of the debris is safe to bring into our city.”

At a forum in June, where the city explained its plan to residents, Mr. Kitahashi announced publicly that he is a second-generation A-bomb survivor. His mother, now 80, experienced the atomic bombing of Hiroshima and once told Mr. Kitahashi when he was a high school student: “I was torn over whether or not I should give birth to you.” The mayor is unable to forget the look on her face when she said this.

Mr. Kitahashi has held discussions with such people as researchers on radioactive waste, doctors, and leaders of citizens’ groups in connection with the decision to accept the debris. The standard set by the city for this debris is much stricter than the national standard of 8,000 becquerels per kilogram: “The level of radioactive material must be 100 becquerels per kilogram or less to be turned into incinerated ash available for reclamation.”

The mayor commented, “I took prudence to an extreme in the study of this plan. If the results were dissatisfying, I would have declined the request.” Mr. Kitahashi’s feelings stem from his own fear of radiation since hearing his mother’s experience of the atomic bombing.

Hiroshima Mayor Kazumi Matsui has expressed similar support for the earthquake sufferers. “Hiroshima, which endured the atomic bombing, was reconstructed with the world’s support,” he said. “It’s vital that we return the favor by showing our willingness to help with the recovery of the affected areas.”

The City of Hiroshima, however, remains undecided on whether or not to take in the debris, a request made by the central government. According to the city, the main reason for its inaction lies in the lack of explanation provided by the central government with respect to the safety standard involving the debris. In addition, a senior city official said, “The city is also taking into account the feelings of A-bomb survivors, who are sensitive to the harm that radiation can cause.”

On July 25, the Miyagi prefectural government announced that it will only solicit cooperation from the municipalities that have already indicated their willingness to accept combustible debris for incineration. In order to resolve the disposal of this debris more quickly, the prefecture is calling for these municipalities to increase the amount of debris they will accept. An official of the division responsible for the debris in the prefecture explained: “There’s no other choice under the current conditions, where the people of many municipalities are opposed to accepting the debris.”

Hiromi Hasai, 81, an A-bomb survivor and a professor emeritus in nuclear physics at Hiroshima University, commented, “While the people of the affected areas and other municipalities have pointed to the A-bombed city, the Hiroshima city government has not even moved to discuss the issue with a group of experts.” Professor Hasai expressed chagrin over the city’s reluctance to act.

Earthquake disaster debris
According to the Ministry of the Environment, as of June 30, 2012, the amount of debris that exists in the prefectures of Iwate, Miyagi, and Fukushima, as a result of the Great East Japan Earthquake and subsequent tsunami, is estimated at 18.8 million tons. Of this total, Iwate and Miyagi have requested the disposal of 2.47 million tons at facilities outside of their prefectures. All the debris in Fukushima Prefecture will be disposed of within the prefecture. The Japanese government has urged Japanese municipalities and corporations with appropriate facilities to cooperate in the disposal effort, hoping to complete the disposal of debris found in Iwate and Miyagi prefectures in fiscal 2013.