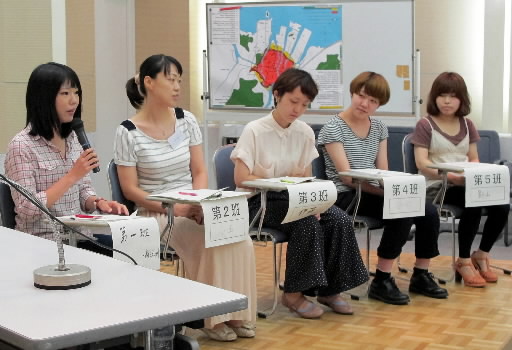 
Redefining the “peaceful use” of nuclear power
“Express your own ideas on the pros and cons of nuclear energy.” This essay question was posed on the final exam, given July 23 at Hiroshima University’s Higashisenda campus, for a course entitled “Peace Studies from Hiroshima.” About 70 students in the course responded with an essay.

The course is taught by Noriyuki Kawano, an associate professor at Hiroshima University’s Institute for Peace Science and an expert on the atomic bombing and radiation exposure. The 14 classes for the course, which began in April, looked at cases of nuclear damage in the world as well as the reality of radiation exposure and the challenges facing nuclear abolition. The cases of nuclear damage include the accident at the Chernobyl nuclear power plant in Ukraine and the Semipalatinsk nuclear test site in Kazakhstan, both occurring under the rule of the former Soviet Union, and the accident at the Fukushima No. 1 (Daiichi) nuclear power plant.

In particular, Mr. Kawano used a total of five class periods to explore the disaster in Fukushima. He aided his students in thinking about the needs of evacuees by showing video footage that included scenes from the village of Iitate in Fukushima Prefecture, whose residents were compelled to leave their community behind.

Reona Kusano, 24, originally from Osaka and currently a resident of Higashihiroshima City, is a first-year student in the school’s faculty of Law. Ms. Kusano pondered the commonalities between the sufferers of Fukushima and the A-bomb survivors, a connection she had not previously considered. “Only those who experienced such things directly can understand the real horror,” she said. “Still, I was able to gain a deeper sense of the atomic bombing of 67 years ago.”

Tomoya Ota, 20, also a resident of Higashihiroshima, is a first-year student in the faculty of Economics. Mr. Ota had believed that the nation’s nuclear plants should all be shuttered immediately. But through his experience of the course, he began to view the situation differently. “Eliminating the use of nuclear energy would have a significant impact on Japanese society and our economy,” he said. “I’ve come to feel that it would be better to deepen our discussion of this problem before reaching a conclusion.”

The disaster in Fukushima has forced us to redefine the relationship between human beings and nuclear energy. What “peace studies” should be made from Hiroshima, which suffered the first nuclear damage in human history? New explorations to redefine the “peaceful use” of nuclear energy have begun on an “intellectual front.”

Public opinion has become split over the pros and cons of nuclear energy. Political views are also mixed. Mr. Kawano stresses, “There should be no taboos in the seat of learning. Moreover, after these students graduate from university, they will carry forward Japan’s future. It’s only natural, then, for them to question the real nature of nuclear power.”

Starting in October, the university will also launch a program called the “Phoenix Leader Education Program (Hiroshima Initiative) for Renaissance from Radiation Disaster,” in the doctoral course within its graduate school. The program will seek to foster researchers and practical specialists who can contribute to recovery efforts for such disasters as nuclear power plant accidents.

Hiroshima City University, located in Asaminami Ward, Hiroshima, and the Hiroshima Peace Culture Foundation, located in downtown Hiroshima, have joined forces to hold a lecture series called the “Hiroshima Peace Forum.” The course was begun ten years ago as part of the university’s offerings. A total of 112 people, both students at the university and others from the community, took part in the course between this past May and July.

When the participants split into groups for discussion, six out of ten groups cited Fukushima and energy issues as subjects they wished to learn more about and as challenges facing the world in its pursuit of peace. Comments included: “We want to look at nuclear energy and the atomic bombing as one integrated issue,” and “It’s vital to have a sense of urgency when it comes to nuclear war and the issue of nuclear energy.”

Kazumi Mizumoto, vice president of the Hiroshima Peace Institute at Hiroshima City University and an expert on international politics and international relations, served as the coordinator of the course. “The A-bombed city of Hiroshima must now face the issue of nuclear energy squarely, in addition to nuclear weapons,” he said.