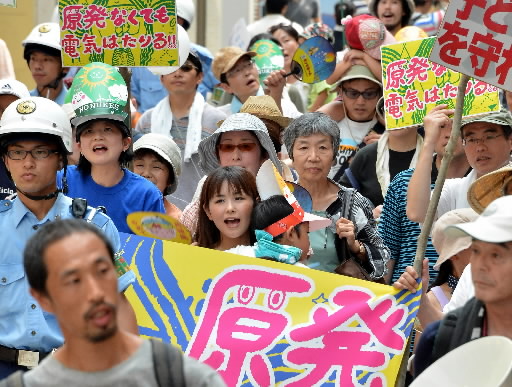 
Desire to eliminate nuclear energy grows
On a recent Sunday afternoon, the temperature around the Atomic Bomb Dome topped 35 degrees Celsius. Ringing the landmark in downtown Hiroshima was a large turnout, including mothers with children and young people beating drums, chanting such slogans as “Save the children” and “We have enough electricity.” It was July 29, and a call put out on Twitter, a service for posting short messages, brought together some 170 people for a demonstration against nuclear power plants.

Noriko Yumiba, 39, an office worker and a resident of Fuchu, Hiroshima Prefecture, was one of the participants. She grew up in the town of Fuchu and now has three children of her own.

After the accident at the Fukushima No. 1 (Daiichi) nuclear power plant, which spewed radioactive substances into the environment, Ms. Yumiba worried, above all, about the safety of the food she fed her children. By approaching the local government and other entities, she has gotten involved in support activities for evacuees from Fukushima Prefecture and from the Kanto region, particularly the Tokyo area. Through these efforts, she has come into contact with the anguish felt by parents who were unable to let their children play outside in their own hometowns and so were forced to leave their communities and relatives behind.

These evacuees have expressed a similar sentiment to Ms. Yumiba: “I had assumed that the people of the A-bombed city would be a lot more aware of the damage caused by radiation.”

Ms. Yumiba’s grandmother entered the city of Hiroshima on the day after the atomic bombing, 67 years ago, to search for her niece in the scorched ruins. But before disaster struck in Fukushima, Ms. Yumiba had not thought seriously about her grandmother’s account and the movement against atomic and hydrogen bombs felt distant. The fact that a gap exists between people inside and outside Hiroshima, when it comes to the image of the A-bombed city, is something she finds both “frustrating and yet somehow motivating.” For her, the “Twitter demonstration,” which she found easily accessible to the average citizen, was precisely the opportunity she wanted.

Miki Morikawa, 40, a resident of Iwakuni, a city not far from Hiroshima, organized the demonstration, dubbed “TwitNoNukes Chugoku.” Sharing her thoughts behind the protest, Ms. Morikawa explained, “If an event is affiliated with a political party, ordinary people can find it difficult to take part. I want to make a platform for people whose only desire is to express opposition to nuclear power plants.”

Hiroshima has long made the appeal “No more hibakusha.” But the movement against atomic and hydrogen bombs, which had been the driving force for this appeal, ultimately split into two factions over a difference in perspective regarding the use of nuclear energy as well as the explicit ideology of political parties coming to the fore. The movement has since lost its ability to attract both A-bomb survivors and ordinary citizens.

Every Friday, a demonstration seeking the end of Japan’s dependence on nuclear energy is staged in front of the prime minister’s official residence in Tokyo. Ms. Morikawa’s own demonstration shares the same spirit. At the same time, momentum in Hiroshima is growing for those in the A-bombed city who wish to convey their personal views and take action without relying on existing anti-nuclear and peace organizations.

On July 29, as the demonstration took place at the A-bomb Dome, a public hearing organized by the Japanese government to discuss the use of nuclear energy in the nation’s future was held in downtown Hiroshima. Junji Tano, 45, an office worker and a resident of Nishi Ward, expressed his desire to see Japan’s nuclear power plants shut down.

Mr. Tano is a second-generation A-bomb survivor. Although he had been concerned about the nuclear energy issue, he was never actively involved in the anti-nuclear movement until recently. “Before the earthquake,” Mr. Tano said, “when people spoke out against the nuclear power plants, they were thought of as troublemakers.”

Upwards of 200 people expressed interest in attending the public hearing, but only 79, including the 12 who expressed their views, actually appeared at the event. “The lack of enthusiasm at the venue shows that interest in the issue is still low,” Mr. Tano said. “Sharing information only among the people who are already opposed to nuclear energy has certain limitations.”

Lately, when using Twitter, Mr. Tano has been describing himself clearly as a second-generation A-bomb survivor because he believes that the issue of the atomic bombing will inevitably arise as he makes his appeals against the use of nuclear energy. “It’s natural for opposition to nuclear weapons to be connected to opposition to nuclear energy,” he said. He now feels that thinking more deeply about the nation’s nuclear power plants will lead to a surge in public opinion for the abolition of nuclear weapons.