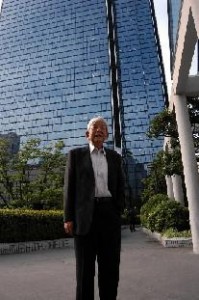 
The costs to assure safety must be clarified
“People are getting hysterical,” is how Yoshikuni Inoue puts it, referring to the movement seeking an end to Japan’s dependence on nuclear energy. That movement has picked up momentum since the restart of the Oi nuclear power plant in Fukui Prefecture, a station run by the Kansai Electric Power Company. Mr. Inoue, 81, a resident of Suita, Osaka Prefecture, takes this view because he believes that Japan’s economy and people’s lives cannot be sustained without maintaining a stable energy supply.

Resuming operations at the Oi nuclear plant was a highly-anticipated desire of the Kansai business community. Of the total electricity produced by the Kansai Electric Power Company, more than 50 percent is generated by its nuclear power stations. This is one of the highest ratios among the nation’s 10 electric power companies. Mr. Inoue sees Prime Minister Yoshihiko Noda’s decision to restart the plant as “only natural” if its safety can be assured. He feels this way despite suffering the horror of atomic power himself.

Mr. Inoue was a third-year student at Hiroshima First Middle School when he encountered the atomic bombing. Mobilized for the war effort, he was at work at the Toyo Kogyo factory, now Mazda Motor Corporation, when the bomb exploded. As he made his way home to Hakushima-cho, located about 1.6 kilometers from the hypocenter, he saw Hiroshima in flames and scores of people who had been burned by the bomb’s heat rays.

Like many other A-bomb survivors, Mr. Inoue feels that “nuclear weapons must be abolished,” yet he has remained aloof from the anti-nuclear movement. “While standing under the U.S. nuclear umbrella, Japan is unable to take a leadership role in shaping international opinion for the elimination of nuclear weapons,” he said. “National defense is essential, though, and a pacifism which doesn’t bear the cost is too optimistic.”

Some believe that the accident at the Fukushima No. 1 (Daiichi) nuclear power plant took place partly because the Tokyo Electric Power Company (TEPCO) had failed to invest in sufficient safety measures. Mr. Inoue therefore feels frustrated at hearing the current discussion regarding the nation’s nuclear plants.

“It would be tough to replace nuclear energy with natural energy in a short period of time,” he explained. “By accepting this reality at face value, we must first clarify the costs involved in guaranteeing the safety of our nuclear power plants. This must be the starting point for further discussion.” He makes the clear argument that no safety or peace can be possible without shouldering some expense.

Meanwhile, some business leaders are seeking to promote a nuclear-energy-free society by getting renewable energy sources going. In March, the heads of small and medium-sized businesses nationwide launched the “Network of Business Leaders and Entrepreneurs for a Sustainable Business and Energy Future.” Based in Tokyo, with about 470 members, the network hopes to share the activities and know-how of people across the nation.

Noboru Sugimoto, 45, an executive of a construction company and a resident of Higashihiroshima City, serves as the network’s contact person in Hiroshima Prefecture. After the disaster at the Fukushima plant, he grew alert to the presence of the nuclear power station in his area for the first time. The power station in the city of Matsue, operated by the Chugoku Electric Power Company, is located about 120 kilometers from his home. He also became more conscious of his own identity as a second-generation A-bomb survivor.

At the same time, he and his acquaintances within the network have vacillated over what would be Japan’s best stance toward its nuclear energy policy for the future. “We can’t eliminate nuclear power plants in one fell swoop,” Mr. Sugimoto said. “But I feel uncomfortable about a form of energy that can only be sustained by sacrificing certain people. I’d like to pursue a path where we no longer have to rely on nuclear power stations.”

The Japanese government is now looking at postponing its decision for the nation’s new energy and environmental strategy, which it had indicated would be ready by the end of August. “Until a more concrete scenario is presented, people can’t realistically grasp the effects on their daily lives,” Mr. Sugimoto said, evincing the wisdom of a business person.