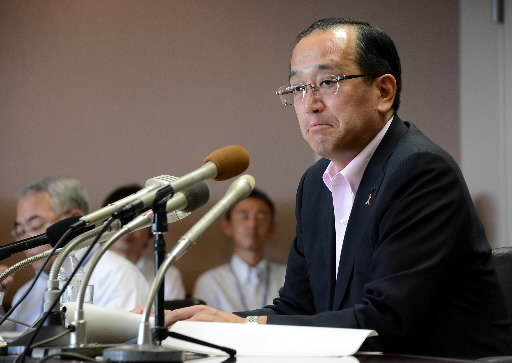 
No mention of pros and cons of nuclear energy
“I will call on the Japanese government to establish an energy policy that guards the safety and security of the people,” said Kazumi Matsui, mayor of Hiroshima, choosing his words carefully when questioned about the issue of Japan’s nuclear power plants. On August 1, Mr. Matsui announced the outline of the Peace Declaration to be read at the city’s annual Peace Memorial Ceremony on August 6.

The anniversary of the atomic bombing will arrive for the second time since the accident at the Fukushima No. 1 (Daiichi) nuclear power station, which occurred on March 11, 2011. Like last year, the mayor will avoid addressing the pros and cons of nuclear energy. “The Japanese government is responsible for this matter,” he said. “They will listen to the voices of the people and then pursue a certain course of action. I don’t believe my own judgment should influence the way a lot of people think.”

Mr. Matsui took office in April of 2011. Since last year, he has introduced a new method for drafting the Peace Declaration, which he read for the first time at last year’s ceremony. The mayor solicits the experiences of A-bomb survivors to quote their descriptions of the atomic bombing, and a selection committee, comprised of nine experts and A-bomb survivors, discusses the content of the declaration.

The committee’s discussions are not disclosed. According to the city, the committee members all agreed to touch on the nation’s energy policy, though no discussion was made on how to address the pros and cons of nuclear power plants.

Kumiko Okamoto, 38, did not hide her disappointment when she heard about the outline. Last month, Ms. Okamoto wrote a letter to Mr. Matsui, urging him to incorporate an appeal to end Japan’s reliance on nuclear energy in the Peace Declaration. After evacuating from the city of Motomiya in Fukushima Prefecture, she has been living in Nishi Ward, Hiroshima. “I am now convinced that nuclear power plants have no place in a peaceful life,” she said. “I had higher expectations for the A-bombed city of Hiroshima, as it should be well aware of the horror of radiation.”

The Peace Declaration has reflected the times since the very first speech in 1947. However, the peaceful use of atomic power has only been mentioned a few times over the years. In 1953, the late Shinso Hamai welcomed the idea of nuclear energy. “The ability to release atomic energy is apparently a great scientific advance,” the former mayor said in his Peace Declaration.

In 1991, former mayor Takashi Hiraoka, now 84, stated, “We must not produce any more hibakusha,” alluding to support for those who suffered exposure to radiation as a result of the nuclear accident that took place in Chernobyl, in the former Soviet Union, in 1986. Speaking today, Mr. Hiroaka said, “I never appealed for an end to nuclear energy, though. To be honest, I didn’t give it any thought at the time.”

On July 31, the day before the press conference held by Mr. Matsui, Tomihisa Taue, the mayor of Nagasaki, announced the outline of his own Peace Declaration, to be read on August 9, the anniversary of the Nagasaki bombing. Mr. Taue said that he will call on the Japanese government to present a clear energy policy which includes the development of renewable energy sources, an idea he raised in last year’s declaration.

In addition, the Nagasaki mayor plans to refer to the problem of disposal of the radioactive waste from nuclear power plants. The declaration made from Nagasaki will therefore delve deeper into these issues than the declaration from Hiroshima.

At the same time, the Nagasaki declaration is not expected to address the pros and cons of nuclear plants. In Nagasaki, a draft committee composed of 18 A-bomb survivors and experts develops the content for the declaration. Reportedly, there were instances, during work on an earlier version of the draft, where some members of the committee argued that the City of Nagasaki should clarify its stance calling for an end to the use of nuclear energy in Japan. Remarks such as “The wording is weak” and “As an A-bombed city, we should express our anger against the politics of the issue” were made in the committee meetings.

Hideo Tsuchiyama, 87, former president of Nagasaki University, is one of the committee members. “The Peace Declaration also has a role to play in conveying to the Japanese government and the international community our wishes for the world in the future,” he commented. “As the issue of nuclear energy cannot be solved at one stroke, it’s all the more important that we express the intentions of this A-bombed city clearly.”

Ms. Okamoto said, “Is it acceptable for the A-bombed city of Hiroshima not to speak out on the issue of nuclear energy? Because the Peace Declaration draws the attention of the international community, I wanted the city to include it in the statement.”

What stance should Hiroshima take toward nuclear energy? The A-bombed city has been unable to arrive at an answer.

(This is the last article in the series “Nuclear Reactors Rekindled.”)