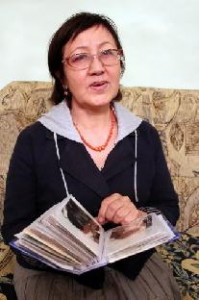 In Kazakhstan, there are a large number of people who were exposed to radiation as a result of repeated nuclear testing by the former Soviet Union during the Cold War era. These victims of radiation exposure still suffer from such radiation-induced diseases as cancer and heart ailments, and the damage to human health now extends to the second and third generations. The Chugoku Shimbun interviewed Nailya Chaizhunusova, 60, about the current conditions and challenges involving the radiation sufferers. Dr. Chaizhunusova is a professor at Semey State Medical University and, as a pediatrician, has been providing medical care at that institution.

What is the current situation of the radiation sufferers?
As a consequence of the more than 450 nuclear tests that were conducted, those who were exposed to radiation are suffering from heart diseases and cancer. The effects on the second and third generations are grave, too. I have seen many patients who were born with congential disorders. These disorders include heart abnormalities, missing limbs, skin cancer, and an inability to stand due to bones that did not properly harden. I am committed to helping these people.

The nuclear test site at Semipalatinsk was closed over 20 years ago. But children with disabilities continue to be born since its closure. The number of sufferers stemming from the nuclear test site, including the second- and third-generation offspring of those exposed to radiation, totals about 1.5 million people. I expect that this number will go on growing, too. I would like to help advance the research being done on the genetic effects involving this population.

A law to provide local residents of the nuclear test site with relief measures was enacted in 1992, and since that time the Kazakh government has been implementing this support, is that right?
The Kazakh government is providing compensation to the radiation sufferers. The amount is determined based on the location and duration of residence, though I believe the amount should be raised.

In the future, the number of hospitals for these patients must increase and the quality of the hospitals must be higher. It is also vital to establish a system where diagnosis and treatment are made in an early stage, and strengthen the medical expertise of doctors.

Is there a contribution that Hiroshima can make?
For many years, in the private sector, we have continued to conduct exchange activities in the fields of medicine and academia. Doctors from Hiroshima have provided the radiation sufferers with medical examinations and made other contributions, producing significant achievements. This past summer, we invited doctors and researchers from Hiroshima to our medical university. It was the first time for us to receive intensive training on radiation issues and the latest medical care. I would like to extend this cooperation from the Hiroshima physicians in order to foster capable doctors in the city of Semey through such activities as operations that are open for observation to our medical students and professionals.

Dr. Nailya Chaizhunusova
Dr. Chaizhunusova was born in 1952 in Semey, formerly Semipalatinsk, Kazakhstan. She became a pediatrician after graduating from I.M. Sechenov First Moscow Institute of Medicine, now the I.M. Sechenov Moscow Medical Academy (MMA). Dr. Chaizhunusova was a visiting professor at Hiroshima University’s Research Institute for Radiation Biology and Medicine for one year from July 1994. After serving as the deputy director of the Kazakh Scientific Research Institute for Radiation Medicine and Ecology, she assumed her position as professor at Semey State Medical University in October 2011.