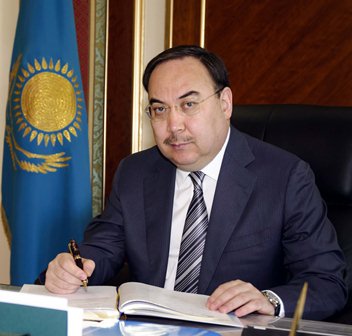 High incidence of cancer among the victims of nuclear testing
by Sakiko Masuda, Staff Writer

In response to the written interview to the Foreign Minister of Kazakhstan, Erzhan Kazyhanov, by the Chugoku Shimbun and a few other Japanese media, he pointed out a grave situation of continuous ill-health among the population of the Semipalatinsk region caused by nuclear testing of the former Soviet Union. Mr. Kazyhanov appealed to Japan and international community to lend support for the rehabilitation of the public health of the people and its environment.

Following is the answer to the written interview:

If the necessary assistance is given, in particular in the Semipalatinsk region of the nuclear test site, do you think it is sufficient?
More than 1.7 million people are living in the surrounding areas of the former nuclear test site. This is 10% of the total population of Kazakhstan. The scale of so called “Semipalatinsk disaster” is so great that the international assistance and the ongoing efforts of the Government of Kazakhstan are highly required. I think the international community has yet to have its say on the issue of revival of the region, a victim of the Cold War.

I would like to take this opportunity to thank the Government of Japan and a number of other states, to support a project for the rehabilitation of the environment, public health and the economy of the region.

Priority need today is a comprehensive study and evaluation of medical problems. The immediate effects of radioactive contamination include, above all, a high incidence of cancer. In addition, the population in the Semipalatinsk region faces many non-cancer diseases (anemia, endocrinological diseases, respiratory tract, gastrointestinal tract, etc.). Of particular concern is the mental illness. A large number of people have been suffering from mental disorders. Overall, this is a very big problem for my people.

What is the main purpose and significance of the International Conference "From nuclear test ban for a world free of nuclear weapons," which was held in late August in Kazakhstan?
August 29, 1991, then the Soviet President Nursultan Nazarbayev signed a decree to close the Semipalatinsk nuclear test site with a total area of 18,500 square km. Thus, it ended the 42-year history of the horrible experiments.

In total, in the Kazakh land, more than 500 nuclear explosions were conducted in the air, land, and underground. This is almost half of all the nuclear tests carried out in the world in the history of nuclear weapons. The total capacity of nuclear weapons, tested only in the period from 1949 to 1963 at the Semipalatinsk test site, was 2,500 times more destructive than the power of the atomic bomb dropped on Hiroshima.

I am sure the Japanese people understand the pain and hardships of the effects of nuclear explosions more than anyone else. Semipalatinsk region of Kazakhstan will have to continue to suffer this unprecedented environmental and humanitarian disaster that the humanity has never been experienced before.

Now the day of closing the landfill, August 29, is celebrated annually under the auspices of the UN as the International Day against Nuclear Tests. However, Kazakhstan is not only closed the landfill, but also voluntarily renounced the world's fourth nuclear missile potential, inherited from the Soviet military machine. Thus, the young country has clearly demonstrated the peaceful nature of its foreign policy and has set an example of voluntary disarmament in favor of the non-nuclear status.

Since universal nuclear disarmament has become one of the pillars of the international policies of President Nursultan Nazarbayev, we are making steady progress on this priority and attract a lot of supporters. One evidence of this was a success of sponsoring the International Conference "From nuclear test ban for a world free of nuclear weapons" held in Astana on August 29. Ministers, parliamentarians, representatives of civil society from more than 50 countries have adopted an appeal to the complete elimination of nuclear weapons. I am sure our conference achieved its goal. However, we must continue to strengthen our efforts for worldwide anti-nuclear movement. As a next step, Kazakhstan proposed to develop the Universal Declaration of a nuclear-free world.

The City of Hiroshima intends to host the Review Conference on the Treaty on the Non-Proliferation of Nuclear Weapons (NPT) in the year 2015. How do you rate this idea?
Unfortunately, we have no information on this initiative. But I do not doubt the noble aspirations of the administration of Hiroshima. The NPT is one of the fundamental documents of non-proliferation and disarmament. Kazakhstan considers this treaty as a fundamental legal instrument with outstanding potential in promoting global peace and security, preventing the threat of nuclear weapons and consolidating of multilateral efforts in the field of nuclear disarmament and the peaceful use of nuclear energy.

However, even today, most of the experts in the world believe there is no alternative to nuclear power including the construction of new nuclear power plants. By 2035, the global economy needs for energy which will double. Two billion people on this planet still have no access to electricity. Nuclear power is relatively accessible and competitive, and it does not give the greenhouse effect.

Obviously the requirements for the construction of new nuclear power plants in the world will be revised, taking into account of seismic, geological and other conditions, as well as to improve their reliability and safety. In this regard, the role of the IAEA is more important than ever.

In your opinion, what could be the main factor of instability in the Central Asian region in the next ten years?
I would caution against negative forecasts of the future of Central Asia. The last twenty years have shown that this region is much more stable and dynamic than predicted by most political scientists in the early 1990s. Kazakhstan's example in this respect is more than revealing. Our economy in the last decade and a half has been growing by an average of 7% annually. Compared with the initial period of independence, the country's GDP grew by more than 16 times. Attracted $150 billion in foreign direct investment, it is not bad for the 17 million population.

Of course, there are problems associated with geopolitical challenges and implementation of the transformation in the post-Soviet independent states. We should significantly improve the welfare of the population of Central Asia, to modernize the economy of the region and revive Afghanistan. We need an uncompromising fight against drug trafficking and extremism as well as to use efficiently water and energy resources in the region.

We also promote the rehabilitation of ecological disaster in the Semipalatinsk region and the Aral Sea. In this case, I would like to note the high level of all-round cooperation with Japan. In November 2012, I intend to attend the 4th meeting of the Council of Foreign Ministers of the dialogue called "Central Asia + Japan."

I am confident in the implementation of good governance, good regional cooperation and support from the world community. I am sure that the Central Asia has a very bright future.