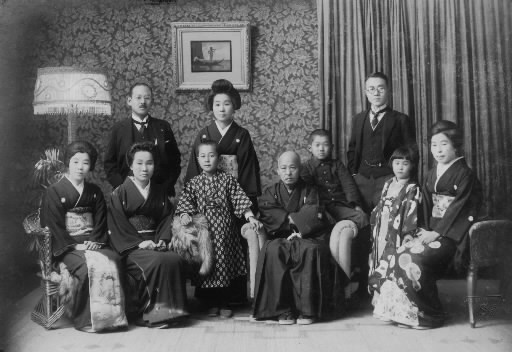 I was born in Hiroshima (in what is now Ko-machi, Naka Ward) on August 20, 1919 as the son of Jitsuichi and Hiroko Yamamoto. I had one brother, who was three years older. My grandfather, Saburo Yamamoto, founder of the Chugoku Shimbun, was called Risaburo when he was a boy. The Chinese character for “Ri” was used for the name of my brother, his first grandchild, but with the reading “Toru,” and the third character of his name was used for my name with the reading “Akira.”

Saburo was born in 1861 and adopted by Kosuke Yamamoto (at the age of 24). In 1903 he married Kuni, who was born in 1868. She had married Masahiro Tomita of Kagoshima and had two children, Hiroko and Masafusa, but Masahiro died so she got remarried to Saburo. Because he had no children of his own, Saburo adopted Kuni’s two children.

Against the background of the growing demand for democratic rights, on May 5, 1892 Saburo Yamamoto founded the “Chugoku” newspaper with Kenji Nagaya, who later became mayor of Hiroshima, and several others. The company’s offices were located in Ote-machi (Naka Ward). Saburo was named president in 1898. In 1908 the name of the company was changed to Chugoku Shimbun, and its foundation was laid.

Saburo liked politics and served as a member of the city council and later as its chair (in 1904 and from 1907 to 1909). He was a member of the Rikken Seiyukai (Friends of Constitutional Government, a party led by Takashi Hara for several years around 1920), and engaged in a fierce competition with the Geibi Nichinichi (a daily paper that predated the Chugoku Shimbun). The two papers took opposite sides in the parliamentary election, and conducted a war of extra editions with somewhat exaggerated reports. Their offices were even subjected to searches.

Saburo was just over 5 shaku (151.5 cm) tall, and lean, but I was told that he was a master of judo and highly skilled. When I knew him, though, he was already elderly and not so vigorous.

Jitsuichi was the sixth son of Jirozaemon and Teru Tsukifuji, farmers in Fuchu-cho, Aki-gun, Hiroshima Prefecture. He attended Hiroshima First Middle School and then the No. 6 High School in Okayama before entering the agriculture department of Tokyo Imperial University. He planned to study agriculture because he hoped to run a large farm with his elder brother Tomoichi (who had moved to California), but this dream was shattered when Tomoichi was killed in a traffic accident.

Around that time, the subject of marrying into the Yamamoto family and becoming an adopted son came up, and Jitsuichi was urged to become Saburo’s successor. So in 1915 at the age of 25 he became Saburo’s adopted heir, took the Yamamoto name and married Hiroko. (He went to work at the Chugoku Shimbun the following year.)

Saburo grew more involved in politics, and his real work of managing the newspaper became haphazard. Unable to endure it any longer, Jitsuichi implored Shuji Tanaka, manager of the sales department (and a participant in the founding of the company), to ask Saburo to get out of politics. Saburo acceded to the request with good grace.

After that, Saburo left the running of the business up to Jitsuichi for the most part while he enjoyed going to movies and playing billiards, go and occasionally hanafuda, a Japanese card game. In those days, the Chugoku Shimbun sponsored a baseball tournament for company teams in the area, and I recall going to it by rickshaw with Toru. Saburo was regarded as a good-natured old man, but he sometimes took pleasure in using his authority to make people do what he wanted them to do.

In 1925 the Chugoku Shimbun built new offices in Kami-nagarekawa-cho (now Ebisu-cho, Naka Ward). The company launched the Chugoku Ekiden, a long-distance relay race between Fukuyama and Hiroshima in 1931. Through this and other efforts the Chugoku Shimbun surpassed the Geibi Nichinichi, whose president was a member of the Diet.

Saburo died in 1933 (at the age of 72). I was in the third year of junior high school. The funeral was attended by Keisuke Mochizuki, a native of Hiroshima who was known as the “Minister of Human Kindness.” (Mochizuki served in various posts including Minister of Telecommunications.) Jitsuichi had the utmost regard for Saburo, and throughout his years as president kept a seated statue of Saburo dressed in a kimono in his office.