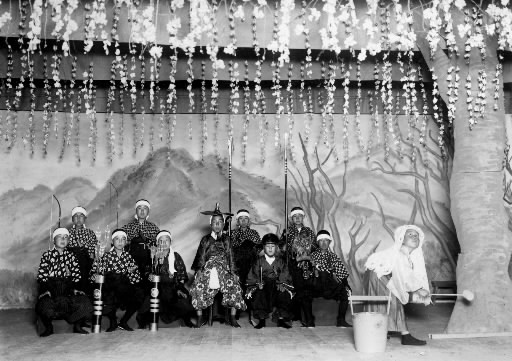 When I was about 3 years old, we moved to Minami Takeya-cho (now Hirano-machi, Naka Ward). Right after that my father, Jitsuichi, developed typhoid fever and was quarantined in a special hospital in Funairi-saiwai-cho for people with infectious diseases (now the municipal Funairi Hospital). While he was in the hospital I contracted children’s dysentery, and we were both gravely ill.

I looked like a plucked chicken, and my condition was so bad that even the doctor gave up on me. In those days, a cannon on Hijiyama (Minami Ward) was fired every day at noon. Whenever I heard that, I sang a little song asking for two cookies and a caramel, which I had been promised.

Our house in Minami Takeya-cho was on the Kyobashi River and extended out toward the river. The river was clean, and when the tide went out an island was created in the middle. The sand along the riverbank crunched underfoot. I often gathered shijimi clams. When the tide came in, dace, gray mullet, black sea bream and other fish would swarm up the river. When it was hot, I spent the whole day in the river.

The class had both boys and girls, with 18 of each. My teacher was Kaoru Okubo all the way through graduation. He was a big man who combed his hair straight back and wore thick glasses. He was very warm and enthusiastic. The class was small and close-knit.

The elementary school affiliated with Hiroshima Higher Normal School was founded in 1905. At the time, it was located in Higashi Senda-machi (Naka Ward), and students entered in the fall from 1918 through 1926 (according to a history published on the 47th anniversary of the school’s founding).

I often swam in the river, so once or twice a year I had to go to the ontological clinic. When I was in the fourth grade I developed a middle ear infection and eventually had surgery. My condition didn’t improve after the surgery, and my mother didn’t know what to do, so she took me to a faith healer. She shouted “Ei! Ei!” enthusiastically beside my ear, and then one day pronounced me completely healed. From that day on no more pus came out of my ear, and I was very relieved.

I romped around, full of energy. My grades were among the best in my class and mostly As, but I got three or four Bs following my long absence on account of my ear infection. I was good in music class. I suppose I had a good voice. So I was the star of the school play.

When I was in the fifth grade we put on a play called “Grandfather Cherry Blossom’s Later Years.” In the play, after undergoing religious training, the son of the wicked old man makes flowers bloom on withered trees and is praised by the feudal lord. He says various things to clear the wicked old man’s name. I played the part of that boy. It was hard because I had to sing and I had a lot of lines, but my performance was well-received, and the play was even broadcast nationwide on NHK Radio.

My father had graduated from Hiroshima First Middle School (now Kokutaiji High School), and he said he wanted “someone” in the family to go there too. As there were only two of us, that “someone” had to be me. The fathers of my classmates Toshizo Nishimura (later a member of Hiroshima’s city council) and Kazuo Tsuda (who later wrote a column on professional baseball for the Chugoku Shimbun) had also gone to Hiroshima First Middle School and wanted their sons to go there as well. So we took the entrance exam together, but I was the only one who got in. Tsuda got in the following year, and Nishimura went to the junior high school affiliated with the normal school along with a classmate.