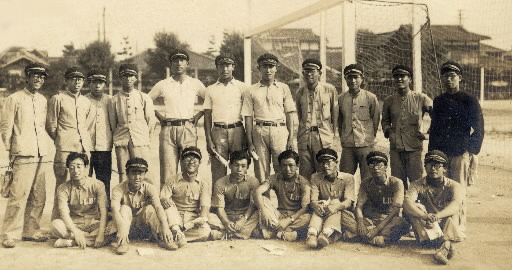 (After entering one year early) I graduated from Hiroshima First Middle School (a five-year school, now Kokutaiji High School) in 1935 after four years and then entered the Hiroshima High School humanities course for which German was the second language. My brother Toru, who graduated just before I entered, had been in the same course, and in light of the general climate of the times, I chose it without the slightest hesitation. I was young and immature, but for that reason I was able to focus on my studies and was always at the top of my class.

Hiroshima High School opened in Minami-machi (now Midori, Minami Ward) in 1924. According to the Ministry of Education’s annual report for the 1935 school year, of the 491 students who took the entrance examination for the humanities course that year, only 85 were admitted. The school was one of those that merged to form Hiroshima University in 1950.

Our house was in Hirano-machi (Naka Ward), so it was only about a 15-minute walk to school, but I usually rode my bicycle. In three years I was never late or absent. Perhaps that was unusual in those days, but when I graduated I got a medal in recognition of my perfect attendance.

In the three years from 1935, the February 26 incident (an attempted coup d’état in 1936) occurred and Japan became embroiled in the Sino-Japanese War (which began in 1937) and proceeded inexorably along the path toward the catastrophe that was World War II. But quite a bit of the free atmosphere typical of the old high school system still remained. Having been freed from the rigorous life of a Hiroshima First Middle School student, everything seemed new to me, and I was interested in all sorts of things.

For one thing, my uniform had pockets, and I was glad just to be able to stuff my hands into them. (The pants of the uniforms at Hiroshima First Middle School had hip pockets only.) I wore wooden clogs to school and let my hair grow. I did not go to the barber shop for five or six months. I always had a Japanese-style towel hanging from my waist.

I was preoccupied with movies. On Saturday afternoons I generally went to the Showa Cinema in Nakajima Honmachi (now the site of Hiroshima Peace Memorial Park). It was the golden age of foreign films. I was proud of being able to hum the theme song from the German film “Der Kongress tanzt” (“The Congress Dances”). I snapped up the “Akamaki” translated novels (a foreign literature series) published by Iwanami and read them avidly. I became interested in music and got my parents to buy me a large Victor phonograph. Then I went out and bought a lot of 78-rpm records. My mother wrung her hands and said, “Did you really buy this many?”

In short, I proceeded down the same path as any other ordinary high school student and gradually became more cultivated.

In the summer there was an intramural boat race in Ujina (Minami Ward). I participated wearing a traditional black kimono with a family crest. That evening we had a party. At the fall school festival I sang “Tairyobushi” (a traditional folk song about fishing) while pulling a boat. I practiced the dance for the song several times in Hijiyama.

I was blessed with good teachers and good friends. Nobuyoshi Teranishi, who had become my friend at Hiroshima First Middle School (later vice president of Nippon Steel Corp.), and I did everything together. I can’t count how many friends I had. Iwao Nagano in the English course (a classmate, later governor of Hiroshima Prefecture), Kenichiro Matsutani in the science course (one year behind, later president of the Chugoku Electric Power Co.) and Tadayasu Yamauchi (two years behind, later president of the Hiroshima Gas Co.) were just a few.

Mr. Teranishi is hale and hearty at 95 and lives in Setagaya Ward in Tokyo. Reminiscing about the merits of high schools under the old education system, he said, “In addition to education, we had free time in which to explore how we wanted to live as human beings.”

My friends and I would walk through the shopping arcade and talk with each other, losing all track of time. We also enjoyed rowing boats and playing ping pong. Once, our team won the intramural soccer tournament. We were all young and full of energy. I was stimulated by that rich circle of friends, and among them I removed my rough edges and grew up in a leisurely manner.