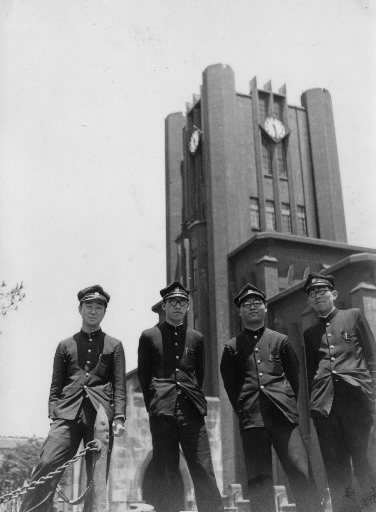 In 1938 I took the entrance examination for the Faculty of Economics at Tokyo Imperial University. The test consisted of Japanese history, foreign language (German) and a physical examination. I went to Tokyo in April and became a student at the university. Everyone wore the school uniform, which included a square cap and a black stand-up collar with an “E” (the badge of the Faculty of Economics) on it.

I boarded on the second floor of the home of Yukihiko Shibata (an elementary school teacher) in Komagome-asaka-cho (now Hon-komagome, Bunkyo Ward). I moved into the room that had been occupied by my brother Toru for three years (until he graduated from the university’s Faculty of Letters). Room and board was 35 yen a month. At first my parents were sending 75 yen a month (an amount equivalent to the starting salary of an employee at a public high school). But I really only needed money for books and lunch, so I deposited the rest in a postal savings account. I did the same with the spending money my father gave me whenever he came to Tokyo. So by the time of my graduation I had nearly 1,000 yen.

In my first year, around the time final exams were approaching, the conflict between the two factions supporting the professors Eijiro Kawai and Seibi Hijikata occurred, and it was said that the Faculty of Economics would collapse. The students were anxious, and spent their days wandering around restlessly. I was taught German economics by Kazuo Okochi (later president of the university), an instructor who had studied under Kawai, and those of us who had graduated from Hiroshima High School submitted a letter asking that he be retained on the faculty.

According to a history of the university’s Faculty of Economics published on its 50th anniversary, Prof. Kawai’s books on labor issues were banned, and Yuzuru Hiraga, president of the university, suspended Prof. Hijikata, who opposed him. As a result, 13 instructors submitted their resignations, and there was a state of confusion for a while.

In my second year, Nobuyoshi Teranishi (a friend since Hiroshima First Middle School days) entered the Faculty of Economics. Sometimes when I was reading late at night, I’d hear a voice from below my window calling out, “Gon!” Gonnohyoe Yamamoto (a former naval officer who served as prime minister in the early years of the 20th century) was so famous that in the past “Gon” was the usual nickname for people named “Yamamoto.” If Teranishi didn’t call for me, I would go invite him over. But all we did was walk around the neighborhood or at most go out to a coffee shop. We never tired of talking about economics and life.

Because I was in the Faculty of Economics, I read the works of Marx, and I understood the theory of the value of labor. I assiduously read criticism of the theory as well, though I didn’t delve deeply into either. Before the final exams in my third year I studied nearly 12 hours a day. During the test I dashed off more than ten pages on a question about the history of economics. I recall that when the examination was over, I felt a little sad that I’d never again be asked to explain so much theory.

Once you’re no longer a student you have to go to work. But in those days the grim reality of military service awaited young men. Even if you were anxious or unsettled, there was nothing you could do about it. That’s why my friends were so important to me. Those of us who had gone to Hiroshima High School would always meet at a certain place after lunch. (According to Mr. Teranishi, it was in front of the university library.) We knew we might never meet again, but no one ever said that.

I took the examination to become a short-term naval officer. (University graduates were hired as paymasters for a period of two years.) It seemed I would be able to get more respect in the military that way. From my perspective as a layman, I figured it would be to my advantage to work at a company associated with the sea, so I took the employment examination for Osaka Shosen Kaisha (now Mitsui O.S.K. Lines). Somehow I managed to pass.

My parents made time to attend the ceremony for my graduation from Tokyo Imperial University in 1941. Afterwards they had a dinner party for me at Seiyoken in Ueno that was attended by a few of my classmates. It was an enjoyable graduation celebration, but that night I got a tip that I had failed the exam for short-term officer.

I had been undergoing training for new employees at O.S.K. headquarters, but if I had failed the officer’s exam there was no reason I had to get a job related to the sea. So after talking it over with my father, I returned all the paperwork to O.S.K., apologized and withdrew my application. Then I went back to Hiroshima with my father.