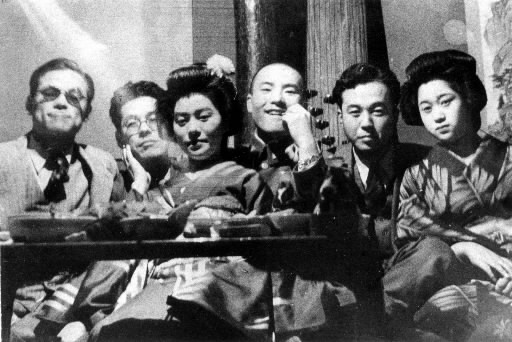 In April 1941 I went to work for the Chugoku Shimbun. It was still a general partnership company with capital of 300,000 yen. I set up a library in a room in the Chugoku Building (a seven-story building located in Kami-nagarekawa-cho, now Ebisu-cho, Naka Ward) that I was given the use of and gathered the minimum essential books and magazines. Then I started a letters-to-the-editor column. Next I wrote movie reviews. Actually, they were closer to descriptions of the films, but I thought it would be good to add a little flavor to the pages of the paper.

One day I ran into Shiun Miyaki (a former classmate from Hiroshima High School and Tokyo Imperial University) in town. He was working as a schoolteacher. I said, “How about coming to work for the newspaper? It’s meaningful and fun.” Kuniyoshi Nakamachi (formerly a teacher in Niigata who had come to work at the Chugoku Shimbun as a chief editor in 1920) heard what I said to Miyaki and said, “You start tomorrow.” Good young men were getting harder and harder to find. I often went out on assignments with Miyaki. We made a rule that stories that got three-deck headlines were worth three points, and those with two-deck headlines got two points. Then we competed to see who could get the most points.

The attack on Pearl Harbor took place on December 8, and the Pacific War began. Around that time I started covering the prefectural government and worked out of their offices (then located in Kako-machi, Naka Ward). The press room was divided in two. The Chugoku Shimbun was with the Asahi Shimbun and the Osaka bureau of the Jiji Shinpo. The Mainichi Shimbun, Yomiuri Shimbun, Godo Shimbun (now the Sanyo Shimbun) and the Kanmon Nippo were on the other side. I gave Reiun Ishii of the Jiji Shinpo a 100-yen bill that my father had given me and said, “Use this to introduce me to the reporters from the other papers.” Ishii was a veteran reporter who had been covering the prefectural government for decades. He agreed to help me out, and we partied at Taigaro (a traditional Japanese restaurant that was located in Futaba no Sato, Higashi Ward).

It was a problem having the press room divided in two, so the manager of the prefecture’s General Affairs Department intervened and arranged for us to be together in one large room. The reporters were always playing go or shogi, and I sometimes played shogi. Only the Chugoku Shimbun had to put out an evening edition, so as soon as I got to the prefectural offices I went around to different departments.

Newspaper reporters are generally unpleasant when they drink. The person I worked with the longest (in the prefectural government press room) was Toshiaki Yamada. He was the grandson of Jutchiku Yamada, founder of Shudo Junior High School. He was conscientious and wrote beautifully. But he was a different person when he was drunk. Once I offered to take him home, but he wouldn’t listen and started crying in the middle of the street. I suppose the anxiety and frustration of young people in those days stirred up strong feelings in them. Yamada was killed in the atomic bombing.

A journalist named Masayoshi Kiyosaki came to work at the Chugoku Shimbun. He was a pushy reporter who wore black-framed glasses. He had worked for a paper in Kyushu. There was a rumor that he used his clips from those days to get ideas for his stories, but he really wrote a lot of good articles. I hung out with Kiyosaki quite a bit, and we sometimes went drinking together.

When Prime Minister Hideki Tojo came to Hiroshima, Kiyosaki was the main reporter assigned to cover the story, and Chuichi Fujita, a skilled photographer, took the photos. During a tour of a munitions factory he took an impressive close-up that showed the headband of the company president and the prime minister’s face as they faced each other.

Tojo visited Hiroshima on December 2, 1942, just before the first anniversary of the start of the Pacific War. From a weapons factory in Minami Kanon in Nishi Ward he called on the “the nation’s five million industrial warriors” to rouse themselves to action. The December 3 morning edition of the Chugoku Shimbun carried an article on his visit that featured four photos.

At New Year’s in 1942 Miyaki said farewell and went into the army. I also took the physical exam for induction. I felt pretty confident about my physical condition, so I assumed I would be drafted. But I was told that there was a shadow on my chest X-ray, and I was classified Class B, Level 3. I asked Dr. Iwao Kurokawa (later director of the prefectural hospital) to conduct another examination, and he said there was nothing wrong with me. It was baffling, but it allowed me to remain a civilian (until being drafted in April 1944).