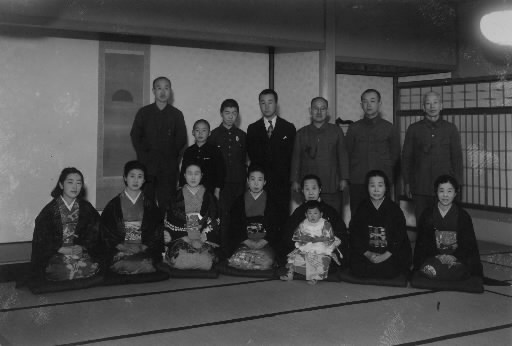 On the evening of March 16, 1944, my draft papers came. I was ordered to report to the Kure Kaiheidan (marine corps) on April 1. I’ll never forget my mother’s strained voice as she called out to me saying, “Well, Akira, it’s finally come.” Considering the serious state of affairs in those days, it was strange that I had not been drafted sooner.

That night I wrote in my diary, “Being able to serve the nation directly as a soldier is truly an honor for a subject of the emperor. I am glad my chance has come.”

I think to a greater or lesser extent all men had the same idea and were able to accept becoming soldiers somewhat. But women were different. In particular, (my wife) Nobuko did not take it well. She trembled and wept, and I seemed liable to be influenced by her feelings. But I couldn’t allow that to happen. I set aside my strong emotions and put my heart into reciting the Imperial Rescript to Soldiers and Sailors.

I went to Hiroshima High School right away the next day. I wanted to say goodbye to the students in the humanities course that I’d become friendly with. But it was the end-of-term vacation, so I wasn’t able to see them. I sent them a three- or four-page farewell letter. I heard later that it was posted on the wall in the back of the classroom for a while.

After being named chairman of the editorial department’s Control Board in September 1943, Mr. Yamamoto taught a class on the legal system and economics at Hiroshima High School, his alma mater. One of his students was Shigeru Okada, who later became president of the Toei movie studio.

On the morning of April 1, I took my government-issued bag of supplies and headed off to join the Kure Kaiheidan. Then I transferred to the Kaiheidan in Otake. We received training as paymasters. We competed at peeling onions, and the team that lost had to double-time. We also had to carry bags of rice. I eagerly studied semaphore. Before every meal, the team leader would send some sort of signal. Anyone who couldn’t read it had to sit there throughout the meal without eating.

When the training for new recruits ended, our team leader said to me, “You were No. 1.” We had tests on everything from bayonet skills to how to flavor miso soup, so I became an “all-around player” so to speak. There were about 15 teams and nearly 200 men.

In our classroom lectures we learned the expression “risshoshin.” We were told that our life as military men was not false or artificial nor was it merely a path to the next stage. Every moment was truth and we should live fully in the present with that in mind.

It seems to me that in the end that expression was all I learned in the navy. I think “risshoshin” had a major impact on the rest of my life.

Some time after I got to Otake, I was allowed to write to my family. I was so happy, and I sent a letter off right away describing my situation. Eventually I got three photos: one of Mitsuko (daughter who had been born in February) alone, one of Nobuko holding Mitsuko and one of my mother and Nobuko. With these photos nearby, I spoke to them of my good and bad times. Once I was able to correspond with them I felt calmer.

At the end of our recruit training of three and a half months, I became a Paymaster First Class. A Seaman Second Class did not get any stars, but a Seaman First Class got their first star on their sleeve. Because there were a lot of new recruits in the Otake Kaiheidan, a lot of people had to salute me. I was able to shop at the base exchange sometimes too, so I bought some bean jam buns and took them to Kazumi Takasu, who worked for the paper (later chief editorial writer) and who had come as a new recruit. He was really happy.

I once again tried to get into the program to become a short-term paymaster. (A navy program to train short-term active-duty officers. Starting in 1942, participants were probationary junior officers during their training.) I was given time to study along with candidates for the reserve officer training course. This time I passed. It was the 12th and last short-term officer course.