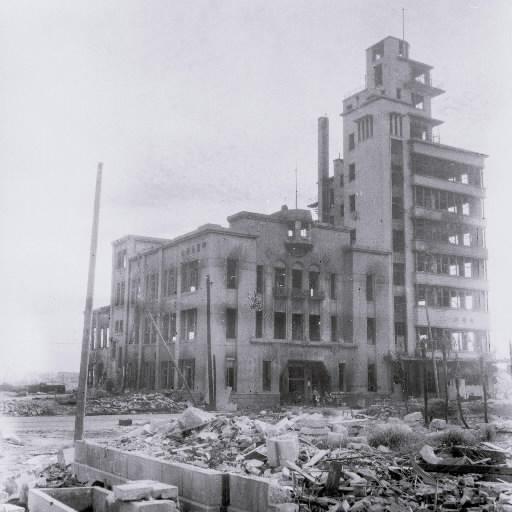 Hiroshima was reduced to ashes by the atomic bombing on August 6, 1945. It was estimated that well over 200,000 people had died or been injured. All of the machinery and equipment (including the two printing presses) at the offices of the Chugoku Shimbun, which were located about 900 meters from the hypocenter in Kami-nagarekawa-cho (now Ebisu-cho, Naka Ward), was destroyed by fire. More than 100 employees were killed. These facts became clear only later after putting together information from various sources, but at the time I was groping for information.

My father, Jitsuichi Yamamoto, president of the company, had evacuated to Fuchu-cho on the outskirts of the city. He learned of the devastation of Hiroshima and the destruction of the newspaper’s offices via reports from employees who gathered at the house in small groups. The first things he thought about were how to continue publishing the Chugoku Shimbun and how to determine whether employees and family members were safe.

His greatest concern was for the safety of my brother Toru. Toru should have returned to the house in Fuchu-cho on the morning of the 6th. As a parent, my father naturally wanted to find out whether or not Toru was alive. Even now it is impossible to know for certain what happened to Toru.

In March 1945 Jitsuichi Yamamoto’s son Toru, the paper’s managing editor, was called up again and assigned to the news team of the Hiroshima Divisional Headquarters. He was 29.

Despite our desire to continue publishing, because the company’s offices had been burned out, we could not print the paper ourselves. So we decided to ask the Asahi, Mainichi and Shimane Shimbun (now the Sanin Chuo Shimpo) newspapers to print the paper for us under the terms of a mutual assistance agreement that was in effect during the war.

Ichiro Uchida (then assistant managing editor), Shigetoshi Itokawa (manager of the Research Department) and Rihei Numata (head of the Itsukushima Bureau) were instructed to send a message seeking assistance. Because communication in the city was cut off, they sent the request via radio from the Imperial Japanese Army’s Shipping Command in Ujina, which they reached after a great deal of difficulty,. This was around 9:30 p.m. Papers printed by other companies and bearing the masthead of the Chugoku Shimbun began arriving with the August 9 edition.

Under the government’s “newspaper emergency measures,” starting with the edition of April 21, 1945, the Chugoku Shimbun was the only newspaper published in Hiroshima Prefecture. A total of 200,000 copies printed at the Osaka bureaus and western Japan offices of the Asahi and Mainichi papers were delivered, and starting on August 11 another 10,000 copies printed at the Shimane Shimbun arrived (according to “Overview of Measures Taken in Hiroshima Immediately after the Aerial Bombing”).

Luckily, one printing press had been taken to the Kawate dairy farm in Nukushina (Higashi Ward) on the outskirts of the city for safekeeping. It had been disassembled by employees and transported there by horse cart. They had just finished putting it in place on August 2. Other necessary materials had also been prepared.

All the employees were eager to put out the paper themselves. Those who were able to work gathered in the village of Nukushina. They slept in one of three tents that had been pitched there or in a corner of the plant (which had been set up in a cowshed). After various hardships, the first “Nukushina edition” was published on September 3.

Through the generosity of Jujiro Matsuda, president of Toyo Kogyo (now Mazda), some of the Chugoku Shimbun’s general affairs, business and editorial offices relocated to an infirmary on the Toyo Kogyo premises (in Fuchu-cho) on August 25. I went to work there on September 3, the day after I returned home following my discharge from the military, and I visited the Nukushina plant as well. I was named acting manager of the General Affairs Division effective September 12.

I had just turned 26 and was still wet behind the ears, but whether I liked it or not from then on I was at the hub of the company and had to confront all sorts of problems. I always tried to give my best. I was under the gun with the work in my new post as acting manager of the General Affairs Division. We were short-handed, and those who were able to work were also saddled with problems such as the deaths or injuries of family members and the loss of their homes to fire. The Nukushina plant suffered from problems with the press and a shortage of materials, so operations there were stretched to the limit.