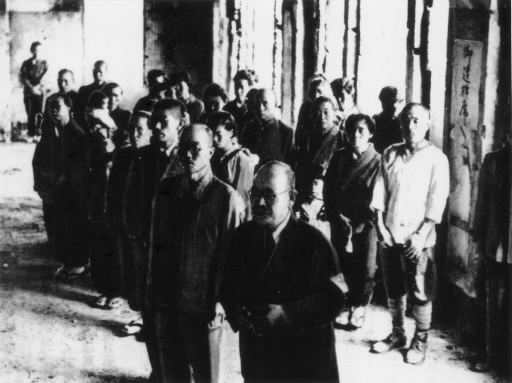 Heavy rain fell for several days in mid-September 1945. And in the middle of the night on the 17th a storm raged. It was the Makurazaki Typhoon. The river that ran by the Kawate farm (now the Fuchu Okawa River) in Nukushina (Higashi Ward) overflowed its banks and washed away part of the floor under the printing press. We would not be able to put out the “Nukushina Edition” for some time. What should we do?

I met with Tetsuo Murakami (chief editor) and Hirokuni Dazai, manager of the Prefectural Police Department’s Special Political Police Section (later deputy minister of the Ministry of Health and Welfare). I described the damage from the flooding and asked for their cooperation in our desire to have the Chugoku Shimbun printed by other newspaper companies again. Mr. Dazai assented, but in a stern tone he asked how long we expected to rely on the (wartime) mutual assistance agreement and said we must become self-reliant as soon as possible. I knew he was right.

The papers that they began printing themselves in Nukushina on September 3 ended with the September 18th edition. After that the paper was printed by the Asahi and Mainichi newspapers at their headquarters, with the Chugoku Shimbun masthead. The Makurazaki Typhoon caused tremendous damage in Hiroshima Prefecture, and 2,012 people were killed (according to a record of damage from landslides in Hiroshima Prefecture).

The Kawate farm had been chosen as the site for the press that was removed for safekeeping, but sticking with a location that was difficult to get to would delay the paper’s recovery. We wanted to return to our offices in Kami-nagarekawa-cho (now Ebisu-cho, Naka Ward) as soon as possible. In order to do that we urgently needed to have the building checked for residual radiation. I sought the opinion of Masao Tsuzuki, a professor at Tokyo Imperial University (and medical scientist who participated in a survey of the damage after the A-bombing), and asked the Hiroshima University of Literature and Science to check the strength of the building. Both of them gave their OK.

We all roused ourselves saying, “Back to the company offices!” But first the building had to be cleaned up. I asked the Chugoku Recovery Foundation for help, and it took 100 people to do the job from the 21st through the 26th. It was difficult because the floors were covered with a layer of ashes several centimeters deep. The fourth floor of the Chugoku Building was offered as a temporary dormitory to employees who had lost their homes.

Starting from September 20 we posted (mimeographed) news bulletins (at railway stations) every day. The problem was disassembling and transporting the press. On the 22nd we asked engineers from Toyo Kogyo (now Mazda) to observe the work, and disassembly began the next day.

On September 30, after things had settled down somewhat, we held a memorial service on the third floor of the building for the employees who had died. This was the thing that had been uppermost in my mind. We hung black and white cloths on the walls, where scorch marks were plainly visible, and set up a crude altar. Three priests chanted sutras. It was an eerie memorial service, but I felt it must have moved the departed, their families and those who participated. I prayed earnestly for the repose of the souls of the dead and pledged firmly to rebuild the company.

On October 1 we moved back to our offices. After remarks by the president, I announced a reorganization that was to be implemented as a temporary measure. All employees were divided into two departments: General Affairs and Reconstruction. Although we were asking that the paper be printed by other companies, it was still necessary to cover local news, file reports and carry out other day-to-day activities. These tasks came under the General Affairs Department, while the Reconstruction Department concentrated on preparations for resuming operations at the company offices.

On October 2 we began transporting the printing press by horse cart. Because of the flood damage (and the destruction of bridges on the Hiroshima delta), it was extremely difficult. On October 8 the cabinet of Prime Minister Kijuro Shidehara was formed. We were pleased to be able to print this news in our first “Chugoku Flash,” but that evening we received a report that the paper used to print the newspaper had been put outside so that the (military supply) warehouse (in Kaita-cho) where it had been stored could be turned over to someone else. We all went to the warehouse, but it began to rain, and it was hard to know what to do.

According to “Hiroshima 1945,” a series of articles by Ichiro Osako, who had been a reporter for the Chugoku Shimbun, U.S. military forces to be stationed in Hiroshima were going to use the warehouse, so the Chugoku District Military Headquarters ordered the immediate removal of the paper. Without a horse cart or a truck with which to transport it, 30 rolls of paper were put under the eaves of the building, but about 140 rolls were rendered unusable.