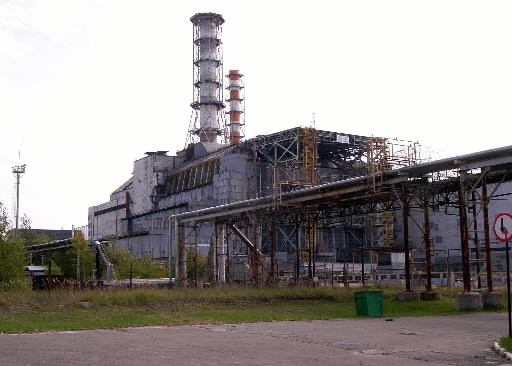 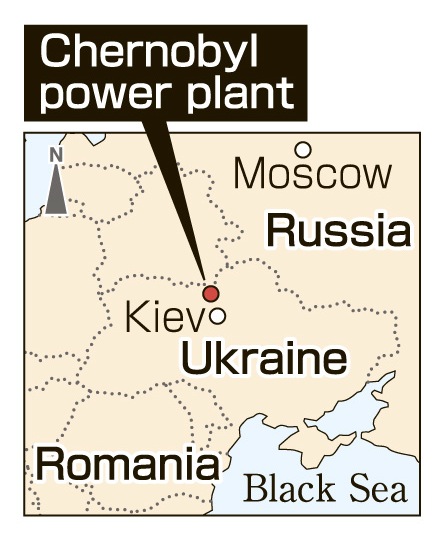 I paid a visit to the nuclear power plant in Chernobyl, site of the worst nuclear accident in human history, and akin to the disaster that occurred at the Fukushima No. 1 (Daiichi) nuclear power station. I was joined by Noriyuki Kawano, an associate professor at Hiroshima University’s Institute for Peace Science, who has been researching the thoughts of the radiation sufferers there for the past three years. I will report on current conditions in Chernobyl in two series of articles.

The Chernobyl plant is located 130 kilometers to the north of Kiev, the capital of Ukraine. After passing a checkpoint at the 30-kilometer exclusion zone and driving through a forest of white birches, pine trees, and poplars, we reached the city of Chernobyl.

When the accident took place at the power plant, the city itself was not badly contaminated, as it was situated upwind of the plant. Today, about 4,000 people, including decontamination workers, scientists, and engineers, live here, engaged in such tasks as sealing off radiation emitted from the crippled power plant and keeping contaminated materials safely controlled. It is said, however, that they return to homes outside the city for three days after working for four days in Chernobyl in order to limit their exposure to radiation.

In the center of the city is a park that was unveiled last year, in 2011, the 25th anniversary of the 1986 disaster. In the park are as many as 162 signposts, reminders of the vanished communities that once lay within the 30-kilometer radius of the plant and were forced to evacuate. To me, they seemed like gravestones mourning the homes and lives lost by the residents.

Soon after departing the city of Chernobyl, I caught sight of the towering chimneys of the No. 4 reactor, the source of the accident. I stepped from the car to get a good look at the whole plant, with its five reactors looming in a line. (They were all decommissioned in the year 2000.)

Gazing at the Chernobyl power plant brought back to me the catastrophic conditions that were caused by the accident, a situation that was a major factor in fueling the collapse of the Soviet Union. The accident at the nuclear plant in Fukushima, too, has prompted change in Japanese society. This illustrates one aspect of the nuclear era, in which the wheel of history has turned as a result of accidents and the suffering of victims. As guilty as I feel over the accident at Fukushima, if it hadn’t occurred, the memory of Chernobyl would have faded.

After undergoing stringent checks, I approached closer to the No. 4 reactor. After the accident, the reactor was sealed in a thick concrete “sarcophagus” to contain the unrestrained energy inside. Inside this sarcophagus, however, are melted fuel rods and radioactive debris, still smoldering to this day. My dosimeter, when used at a point approximately 300 meters from the reactor, still indicated 12 to 13 microsieverts per hour.

The sarcophagus has aged significantly. Its roof has warped, producing gaps. As a result of advancing corrosion, water from rain and melting snow has pooled on the floor. If this structure collapses, another tragedy will occur. To prevent such a disaster, the authorities began creating an arch-shaped sarcophagus in 2010 with the cooperation of the United States, France, and other nations. This shelter is a gigantic structure, 257 meters wide, 150 meters long, and 108 meters high. After its completion, the new sarcophagus will be slid along a track to shroud the entire No. 4 reactor.

The total costs of constructing the new sarcophagus are estimated at over 800 million dollars. The docent stressed that the structure will be completed in 2015. But it seems this construction is not progressing easily, since the work must be done at a site where high levels of radiation have been measured.

Jiro Asada, president of the Japan P.E.N Club, visited the site of the new sarcophagus in April of this year and dubbed it a “gray matryoshka” when he saw it. A matryoshka is a set of Russian dolls of decreasing size placed one inside the other. Even when the crippled reactor is covered with the new sarcophagus, another new sarcophagus will have to be created and put in place again when the previous one ages, since radioactive materials remain a danger for many, many years.

The fruitless nature of this effort, which produces no gains for the world, left me with a feeling of emptiness that will only grow as the effort itself continues to expand. And then my thoughts turned to the disaster in Fukushima.

The No. 4 reactor at Chernobyl is a symbol of the struggle between human beings and the nuclear genie.

Takashi Hiraoka
Born in 1927. As a journalist with the Chugoku Shimbun, oversaw a series of feature articles entitled “20 Years After the Bombing.” Elected mayor of Hiroshima in 1991 and served for two terms, a total of eight years. Currently engaged in various activities, including support for those suffering from radiation exposure as a result of the nuclear testing conducted by the former Soviet Union.