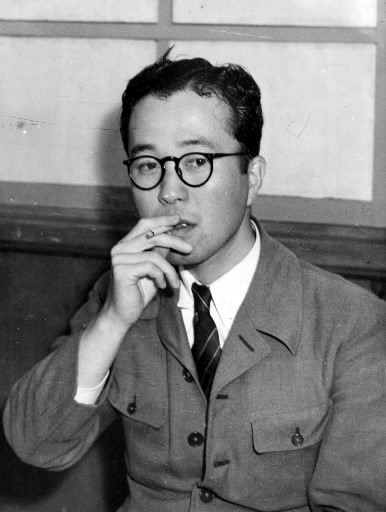 Although the war was over, there was a terrible shortage of goods, and inflation was worsening. The political and social situations changed rapidly, and the labor movement was growing.

In February 1946 a rally was held to form a union for employees of the Chugoku Shimbun. In May the employees joined the All Japan News and Radio Workers Union, (the industry’s sole union), and entered into a labor agreement with the company. In 1948 this union became the Chugoku Shimbun chapter of the Press Workers Union of Japan. In 1949 it absorbed the chapter for the workers on the evening daily Yukan Hiroshima, creating the union’s Hiroshima chapter. Kiyoshi Matsue (later a member of the prefectural assembly) was its president.

Yukan Hiroshima was founded on June 1, 1946 as a separate company in order to obtain an allocation of paper, which was still regulated. Thirty-one Chugoku Shimbun employees were assigned to work on Yukan Hiroshima.

When the labor offensive was at its most intense, I threw myself into coming up with measures to deal with the situation in my role as manager of the General Affairs Department and as the first head of the Deliberation Office (which was established in December 1948). I was still in my 20s, but Mr. Matsue and the labor union executives were about the same age, so I didn’t feel uncomfortable. Or perhaps it would be more accurate to say that I didn’t have time to feel uncomfortable.

There was an effort to get rid of the Chugoku Shimbun and the Yamamoto family. In June 1947, we found out that a group made up primarily of members of the House of Representatives had come up with a plan to take over the company. We were told that someone inside the company was pitching the plan to employees. In August a complaint was submitted to the U.S. military government in the name of all the paper’s employees. The complaint called for an investigation and said, “Jitsuichi Yamamoto, who has been purged, can only be regarded as having used the newspaper, which is a public institution, for his personal gain…”

At every negotiating session, allegations of violating the purge edict were raised against my father, Jitsuichi, and we were shaken by them. My father had lost his son in the atomic bombing and been kicked out of the newspaper business, which he had risked his life for. Yet he was behaving with restraint. Pursuing him relentlessly this way was terrible. The times were dominated by leaders who launched a frenzy of attacks. So it has come to this, I thought. Filled with a terrible dread, I confronted this reality.

In 1946 the General Headquarters of the Allied Occupation Forces (GHQ) directed the government to purge militarists and others from public service. The following year the scope of the purge expanded to include the press, and Jitsuichi Yamamoto stepped down from his post as president of the Chugoku Shimbun in January. In his “Shimbun Taiheiki,” Tatsuo Mitarai noted that of the 56 newspaper companies in Japan at the end of the war, the president and other executives at 44 of them were replaced as the result of an “internal revolution” and as the result of the purge edict at the other 12.

So-called “editorial authority” as well came under attack nearly every day. In response to this dispute, the Japan Newspaper Publishers and Editors Association issued a statement in 1948 (two years after its founding) saying that editorial authority rested with management. This issue was a controversial topic at every newspaper company, and our conclusion was reached after a great deal of fretting. It was as if we had surrendered Yukan Hiroshima.

I worried that the Chugoku Shimbun might take the same path someday and thought that if it came down to publishing slanted news coverage perhaps everyone would be better off without the paper. I discussed it with my father. “What shall we do if the Chugoku Shimbun is no longer the paper we know?” I asked. Without hesitation my father said, “It’s OK to shut it down,” suggesting we cease publication. He said nothing to indicate that he had any regrets, and he didn’t ask me a lot of questions. It seemed as if he was well aware of what I was worried about and what I wanted to say. I began to cry.

Since my father had said what he had, I was resolute. Prepared to close the company, I went to the site of the negotiations. My new attitude gave me confidence, and that is how I blazed a new path for the future. I have the clear impression that my youth was spent consumed with a burning desire to save the paper. I have no regrets.